Wednesday, April 06, 2011
RT Bound It's Wednesday afternoon and I want to get this off before I'm off to RT Booklovers Convention in Los Angeles tomorrow. Since that's the home of Wolfram & Hart, I'll be on my best behavior.

Did any of you get caught in an April Fools joke? This one really had me going for a while: 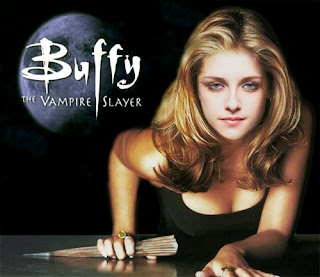 Given the non-stop deluge of attention she's received in the past several years, the obsessive fans, and the privacy-invading paparazzi, it was natural to assume that Kristen Stewart would be done with the vampire genre altogether once shooting on The Twilight Saga: Breaking Dawn Part 2 had wrapped. But apparently Stewart's still up for more fun and hijinks with the undead if the script (or paycheck) is good enough. Because the mumbly twenty-one-year-old has just signed a three-picture contract to star as the title heroine in Fox's Buffy the Vampire Slayer reboot movie series...

Looks like Anna Kendrick is up for the role of Buffy's best pal and right-hand witch Willow, Jackson Rathbone could essay everyman Xander, Ashley Greene may portray the vain Cordelia, Taylor Lautner will likely get hairy once more as teen wolf Oz, Michael Sheen is very close to signing on as Buffy's "Watcher" Giles, and Dakota Fanning's in the running to play Buffy's kid sister Dawn. Meanwhile several pundits have linked Robert Pattinson to the role of Angel. (We've reached out to the actor's publicist, but are still awaiting reply.) One thing that's certain is the film's writer-director team – none other than Stephenie Meyer (making her screenwriting debut) and Catherine Hardwicke, fresh off her instant masterpiece of adolescent angst Red Riding Hood.

Yikes! What a nightmare!!!

Now, this may be another joke, and I have a feeling I've heard about this before, but this was from CNews World Watch 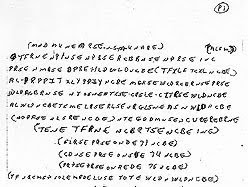 The FBI has asked for help to decipher a note found in the pocket of Ricky McCormick, discovered slain in a St. Louis field 12 years ago.

Investigators have tried to decode the two-page note since the body of 41-year-old McCormick was found. But it's still not known what it says, and experts say it could help solve the case.

So, put on your thinking caps and give it a go.

Terry Wright, who is a critique partner of Mario and me, has an offer for all you readers out there. 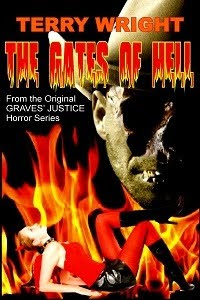 Get Hooked on Justin Graves for FREE   New Line Press announced today for a limited time, the ebook, "The Gates of Hell" by bestselling horror and sci fi author Terry Wright, will be available during the month of April, 2011 for free.  "The Gates of Hell" which reached bestseller status at OmniLit.com is book 1 in the popular Justin Graves Horror Series by prolific author Terry Wright. The short story ebook is available during the month of April for free at New Line Press and Smashwords.com .

There are a couple of upcoming local events you may find interesting: 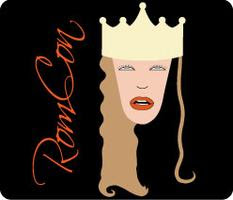 Good news! We have gathered together some wonderfully generous folks who are providing a limited number of RomCon® 2011 scholarships for active duty service men and women and their families, as well as veterans and their families--they are our American Heroes! If you know any American Heroes who deserve a scholarship, please have them write to us for more information!

And more good news! On April 14th, we will be giving away 2 Kindles to 2 people drawn from RomCon® 2011 general admission registrations completed by April 13th, 2011! If you're planning on attending RomCon but haven't registered yet, do so by April 13th so that you can be in the drawing!

Rocky Mountain Fiction Writers is sponsoring a one-day workshop featuring Kirt Hickman, author of Revising Fiction: Making Sense of the Madness. The workshop will be held at the Renaissance Hotel on May 21st.

So, I think that's it for now. I'm looking forward to RT--seeing friends, meeting new readers, eating food I shouldn't, getting room service...the good life!!! If by chance you'll be there, too, look me up!