Wednesday, March 13, 2013
Jim Butcher, New Star Trek, Much Ado About Nothing, and other good stuff
This week: a new book deal for Jim Butcher and some vidya's (homage to Aaron Ritchey) for you to enjoy.

For you Jim Butcher fans from mediabistro:

The Dresden Files novelist Jim Butcher has inked a seven figure deal for three books in a new steampunk series.

Here’s more from Butcher’s official site: At the Reddit AMA a few months ago, Jim said, “It’s kinda League of Extraordinary Gentlemen meets Sherlock meets Hornblower. There are goggles and airships and steam power and bizarre crystal technology and talking cats, who are horrid little bullies.” Jim is still writing the first book, The Aeronaut’s Windlass, so we don’t have a release date yet. We’ll let you know as soon as there’s something to announce!

In case you ever wondered...video below from galleycat:


I screwed up and thought I was publishing this THIS week and instead it got tacked on to last week's blog so I'm repeating it here:

Another geek treasure too good to miss!!


And in case you missed this:

Coming to a theater near you in June!!!


No covers yet to share...hopefully soon!! In the meantime, a St. Patrick Day wish: 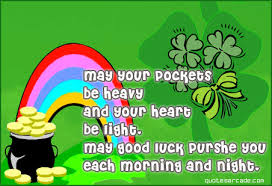 Comments:
Good post. Years ago my then-agent told me to give up writing steampunk because that genre was just a flash in the pan.

Sounds pretty cool, I love the Dresden Files. You should write some steampunk vampire novels, Mario! Could be very interesting. :)

Anything with Butcher's name on it is an instabuy for me. I'm convinced that man has awesome leaking out of every pore in his body.

... and that came out sounding creepier than I meant it to.