It's been awhile, but this week I found three items from the Whedonverse to share!

The Huffington Post | By Laura Prudom Posted: 02/08/2013 9:01 am EST "Firefly" fans were all aflutter when news broke that Gina Torres would be visiting "Castle" for an on-screen reunion with the former Captain Mal Reynolds (Nathan Fillion) -- and thankfully the wait is almost over: The episode airs Monday, Feb 11 at 10 p.m. EST on ABC.

HuffPost TV has an exclusive preview of Torres and Fillion sharing the screen once more -- but this time, they're not exactly on the same team. Torres plays Samantha Foster, a "ruthless fashion mogul" in a "Real Housewives"-style reality show called "The Wives of Wall Street," and as you can see in the clip above, she's apparently not above getting her hands dirty.

Recently, Alan Tudyk (who played Torres' on-screen husband Wash in "Firefly") confirmed that the entire cast would be on board for an "Arrested Development" style revival, while Joss Whedon admitted that he'll "never really accept" the abrupt ending of the cult sci-fi series.

Now I must admit I missed the episode but the most interesting part of the article was the last paragraph....a Firefly reunion show!!! Yea, team!!

Then we have this: 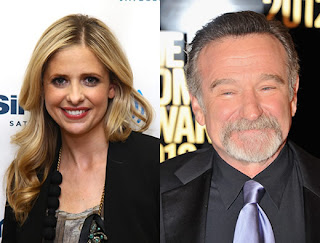 Sarah Michelle Gellar is coming back to the small screen — in a comedy.

The former Buffy the Vampire Slayer star will co-headline CBS’ workplace comedy Crazy Ones, The Hollywood Reporter has learned.

The single-camera entry revolves around the dynamics between a father named Simon Roberts (Good Will Hunting Oscar winner Robin Williams) and his daughter and is set in the world of advertising.

Gellar will play Sydney Roberts, Simon’s daughter. She’s described as pretty, intense, driven, organized and burdened with being practical. Sydney is the creative director and life and soul of the Roberts and Roberts Advertising Agency at the center of the comedy. She wants to be her father but is too busy having to parent him.

For Gellar, the role marks her second potential series-regular role in a half-hour comedy and comes a year after the CW axed her twin drama thriller Ringer. The actress previously shot an ill-fated comedy pilot for HBO in 2009 that failed to go to series...

I really liked Ringer and was sorry it got cancelled. I'm not sure how this is going to play out. David E. Kelley is a good writer and Boston Legal was just funny and weird enough to work. Maybe this will, too. 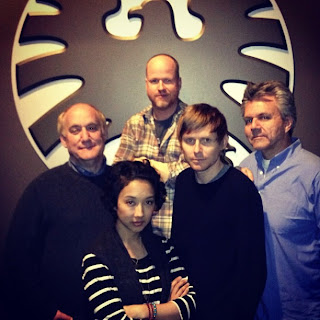 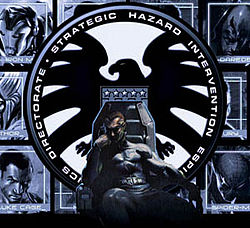 Principal photography has wrapped on Marvel’s S.H.I.E.L.D., ABC’s pilot based on the Marvel Comics super-spy organization. On Feb 12, Showrunner Maurissa Tancharoen tweeted the photograph (at left) top to Instagram earlier today, along with the caption “That’s a wrap."

Don't have an air date yet, but you can bet, I'll be watching this one!


I hope by next week to be able to post the cover for my new book--actually, maybe even the covers for both new books. We'll see.

Comments:
I'm a huge fan of SMG but I don't know if a comedy like this is a good choice...
Hooray for snow, I'm loving playing outside!

Playing in the snow is okay--shoveling it is something else entirely! ;-)