What I'm reading this week: City of Bohane by Kevin Barry

For decades, the television was dismissed as the idiot box and the vast wasteland. Now with HBO and Showtime and all the on-screen nudity, television certainly deserves to be called the "boob" tube.

But truly, modern television programming has decidedly shed the "idiot box" slur. TV programs have never been smarter, better written or more compelling. TV shows can be just as graphic and raw as any big-screen movie.

It's been a long time since I've watched broadcast TV, and years ago we disconnected ourselves from cable. All my TV comes via Netflix's DVDs or its instant queue that I watch on my computer or iPad.
What modern television programming has latched onto and made its own is the continuing series drama that evolved beyond daytime soap operas. This format dispensed with the need to resolve plot questions within one show, in fact, story questions can often span several seasons. Television shows have become deliciously complex and gritty.

The first such program to hook me was The Sopranos. What I admired about that show was its ability to make you root for the bad guys. Tony and his gang starred as psychopathic killers, and yet we were made to cringe whenever the law tired to lasso them. When The Sopranos ended I yearned for another meaty drama to draw me in. Comedic romps like Weeds and Californication didn't work for me. I tried the sci-fi shows, Battlestar Galactica and Fringe, but both became a drag to follow. Then came Breaking Bad and I jonsed for every episode like a trailer-park tweaker. Boardwalk Empire hooked me at first, however it almost lost me at the end of the first season. The plot meandered and the story lost its focus. Reluctantly, I started the second season, and the writers must've heeded the criticism because the show was definitely tighter. I was back on the boardwalk with Nucky Thompson and his shady ways. 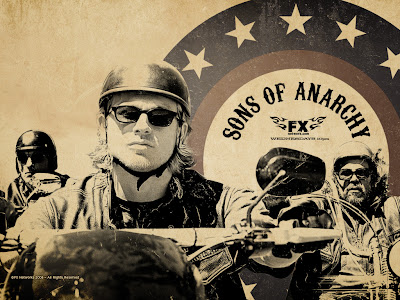 Spurred by Jeanne's recommendations, I cranked up Sons of Anarchy and have been racing through the episodes. The ensemble cast clicks together with the machined precision of a revolver. The reigning star is Katey Sagal (formerly the frustrated and ditsy housewife from Married with Children), who plays the scheming Gemma Teller Murrow, the ole' lady of the motorcycle club's president, Clay Morrow (Ron Perlman).

Charlie Hunnam is Jax Teller, Gemma's son and a young man torn apart by moral conflicts (though that doesn't keep him from doling out the beat downs). The show epitomizes intricate story telling and takes full advantage of the continuing drama format. I'd love to be in on the script-development sessions and see how they can create and weave such complicated marathon plot lines. Conventional serialized-story format states that every episode should end on a cliff-hanger, but SOA often pulls its punch so that the audience fills in the blanks. They know that the train wreck in coming. And can't wait to watch.

Comments:
I told you so!

I still highly recommend Justified. Very complex relationships. Start from the beginning. The seasons are short. Too short. Season 4 starts tomorrow. Trailer park meth for me. So is Breaking Bad.

Cat: I just put Justified in my queue. Thanks.