While Jeanne is galavanting at San Diego Comic Con and working herself into a lather over Joss Whedon, we here at Biting-Edge Corporate are holding down the fort. 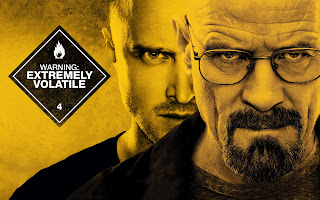 Holding down that fort includes watching the new first episode of Breaking Bad for Season Five. It's no surprise to you that Biting-Edge welcomes hard-boiled noir, the darker the better and nothing on TV comes close to satisfying our jones for grisly, gritty, and bloody as Breaking Bad. Season Four seemed to have ended the big story questions, but no. A lot more intrigue and double-crosses remain. 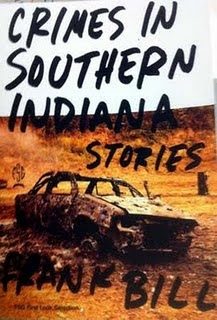 Breaking Bad fits right in with the book at the current number one spot in my reading queue, Crimes in Southern Indiana by Frank Bill. It's a collection of short stories, interwoven into a brutal narrative of crazed vengeance and rural justice. Gander at this amazing cover, illustrative of the desperation and bleakness within the narratives.The writing is not just fresh, but extraordinarily punchy and evocative.

A tweaker gets busted during a night poaching deer.

The cruiser's door slammed. Boots trailed over the loose gravel. Wayne watched the headlights black out the features of the approaching officer in the driver's side mirror. His right hand gripped the wooden stock of his Marlin lever-action 30-30 in the seat beside him that he had used to kill deer several hours ago. The Need square-danced with the amphetamines in his bloodstream , driving the fever in his brain to a boil, and he opened the door.

An eye-for-an-eye revenge about to go very wrong.


Rusted ringer washers. Gas stoves. Dry rotted tires and busted television sets decorated the flat rock hollows. The country yards of rusted trailers and broken-down farmhouses with abandoned red clay tractors. Vehicles on cider blocks. It was the poor man's fairy tale of rural survival. Hines could smell the survival's waste like the sweat that his pores excreted as he sped down the valley road.

Comments:
Oh, I like it! But I think Warren Hammond is still champion of the summer. I thought I knew dark noir, but Kop Killer made me want to invent a whole new word for the genre. Noir noir? Blacker than Satan's coal chute noir?

Bonnie: I agree, Warren's books are just as dark.

Thanks for the heads-up, Mario. I'll check out your pick.

Renata: Let me know what you think. And make sure to check out Kop Killer.