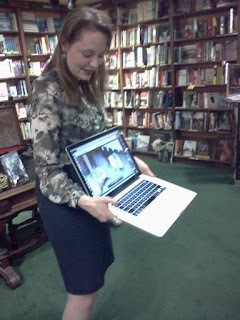 I had the pleasure of escorting mystery writer Hilary Davidson last Friday during her visit to Denver for a signing at the Tattered Cover Bookstore on Colfax. A former travel writer, Davidson geeked out with her laptop when talking about touring Machu Piccho, the setting for her latest mystery, The Next One to Fall. She won both the Anthony and Crimespree Awards for Best First Novel for The Damage Done. I've just started that book and it's the kind of juicy meaty read I haven't enjoyed in along time.

And now, our feature presentation.

The movie John Carter tanked, and I'm heartbroken. The movie was a hundred years in the making and a big-budget adaptation of the grand daddy of all epic science-fiction fantasy adventures...and it became the biggest turkey ever hatched by Hollywood.

To begin, John Carter wasn't a bad movie, in fact, it was a pretty good flick and not deserving the scorn heaped on it. The problem was poor marketing.

It's a sad case of schadenfreude. Us writers are always getting hammered with Promotions! Marketing! Branding! Building a platform! and it's enlightening (and in this case, also disheartening) to see the big pros stumble into disaster.

Years ago, Disney presented a workshop at the University of Denver on branding and marketing. After all, who knows better than the Magic Kingdom about pushing product and plucking dollars out of customers' hands? So it was amusing and ironic, that Disney--with $250 million at stake--crashed this movie straight into the iceberg and claimed they didn't see it coming. Worse, Disney said it spent another $100 million on promotion, meaning they crashed at ramming speed.

For director Andrew Stanton, this movie was a dream project as he was eager to see one of his favorite stories finally brought to the big screen. But the problem was that Stanton was too close to the material. In his mind, John Carter was as well known a hero as Batman (Huh?). Stanton fought back against promotions at ComicCon, the Mecca of geekdom, arguing the project didn't need the publicity.

And then there's the title of the film, John Carter. Originally it was John Carter of Mars, but Disney nixed the of Mars, claiming they didn't want to turn off the teenage girl audience with their delicate sensibilities. (The same audience who is no doubt cheering the bloodletting in The Hunger Games.) With no fancy marketing degree, Edgar Rice Burroughs knew better than to title any of his books, simply John Carter. He rightly figured the public would go, Who the hell is John Carter? So he gave his first three books, the source material of the movie, awesome titles like: A Princess of Mars, The Gods of Mars, The Warlord of Mars.

Which those geniuses at Disney ignored.

Didn't help much that the most visible pre-launch press was this knifing by The New Yorker.

Then there was the trailer. I was excited to see the video as it faithfully depicted the creatures and landscape I have so long wanted to see in film. But my kids were ho-hum. John Carter (again, who?) fighting monsters in an arena. They've seen this before. Luke Skywalker against the rancor. Maximus versus tigers in Gladiator. What the trailer lacked was the spectacle of the Martian world and the romantic spark between John Carter and the princess (the hottie) Dejah Thoris. This fan trailer is closer to the mark of what should've been presented.

Now for a hundred million smackers, I would expect plugs for the movie to become as ubiquitous as credit card spam. But no. Other than occasional links for the trailer, there wasn't much. The movie posters were dismally bland. Disney should sic goons to shake down the marketing execs and get their money back. This last year I attended several sci-fi/fantasy cons and never once saw any John Carter swag. 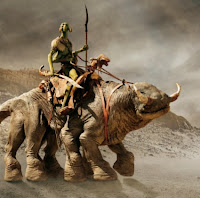 Disney needed to cultivate the John Carter message beyond the small circle of ardent fans (like me) and they had the resources, but not the brains, to do so much cool promotion. A major push at ComicCon with full-size props of the tharks and thoats.

A model of a Barsoomian flyer hanging from the ceiling.

Buff actors dressed as the characters. Since the movie was set in the late 1880's, the Victorian period, the stage design drew upon an elaborate Art Nouveau aesthetic that would've played well with the Steampunk community. Disney could've dispatched teams to all manner of cons to whip up excitement. 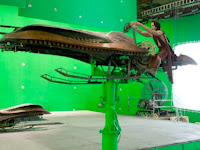 Imagine the killer buzz had they let Steampunkers take photos on this flyer prop? It's bronze for Christ's sake!


Actress Lynn Carter (Dejah Thoris) had an exceptionally toned, beautiful body, and she should've been pimped to Maxim, Esquire, etc., and the fitness magazines. 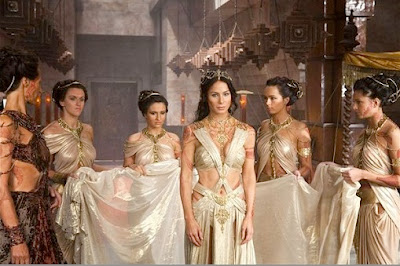 So even the experts fall hard. In this case, it was a great story that suffered.

Great analysis of the breakdown of the marketing department. It is really stunning that Disney misfired so badly on this shoulda-been-easy movie.

And I just want to know where Hollywood got the idea that they should keep any mention of sci-fi-ness out of movie marketing so as not to scare the women. WTH? Anywhere from 25 to 60 percent of sci fi readers and viewers and fans are women, depending on the franchise. I didn't read the Burroughs novels as a kid and so had no idea who John Carter was. John Carter of Mars would have made me much more interested in seeing the movie.

Also, even though you call the New Yorker article a knifing, I thought it was fascinating to read about Andrew Stanton's process. He's a great storyteller despite the misses on this film.

But, I just watched the trailer and I'll be looking for this somewhere.

Chris: Thanks for the comments. Disney really laid an egg with this movie.
Peg: If you watch the movie, I've done my job. Hope you like it.

Thanks for taking the time to discuss this. I feel strongly about it and love learning more on this topic. If possible, as you gain expertise, would you mind updating your blog with more information? It is extremely helpful for me. Thanks!