If you're a writer you get swamped with gotta-do's from every direction. The two big ones are the need for social marketing--blogging, twitter, Facebook, etc.,--and branding.

Every time I hear the word branding, my neck gets tense and I want to ram into something. I don't know of any novelist who said, "Okay world, this is my brand. Now I'm going to write a story using that brand." A lot of writers don't even know exactly what they're writing until midway through the first draft. They might know in broad terms such as: "I'm writing a mystery. With vampires. And zombies. Plus a warlock love interest. Or a mystery thriller with dirty cops." So we writers think of the kind of stories we want to write, not a brand. Press us for a branding angle, it'll probably be: To not suck.

We'd like to say, "My brand is to write international bestsellers that earn so much money I can afford to live like a depraved Roman emperor. And support worthwhile charities." But no one would take us seriously.

It's different for nonfiction. That narrative is built around a platform. "I'm writing about surviving incest. Or the history of coffee. Or how to make a fortune through the Law of Attraction (i.e., the Power of Wishful Thinking.)"

So when publishers or agents ask a novelist, "What's your brand?" to me it means they're grasping at the ether trying to quantify something that you can't quantify: Art.

The truth is, success in publishing is a crap shoot, complicated by what works for one writer doesn't work for another. There's all this talk of social media, branding, building a platform, yada yada. What's missing from the discussion is this crucial element: You gotta write a book people want to read.

There's the argument that with a social media machine in place, a platform built with substantial numbers of followers, branding proclaimed in neon colors, that you'll be a no-fail.

Bullshit. Take for example the two gods of branding: Coca-Cola and the auto industry.

Who knows better about branding than Coca-Cola? Coca-Cola and Coke are two of the world's most recognized brands. With their branding and hype machine in place, anything Coca-Cola does is a sure-fire success, right?

Not so fast. Remember the New Coke? How much money did Coca-Cola pump into that marketing campaign? And what happened? One of the biggest fiascoes in marketing history. Don Draper, where were you?

That was followed a few years later by the OK soft drink. "Everything is going to be okay." Again, Coca-Cola spent millions studying the market and millions more hyping the product (Though it seems no one thought much of the taste--you'd think a no-brainer aspect of a refreshment beverage.) In the end, the OK jet crashed into the ocean. Interestingly, OK was sheperded by the same guy who ran the New Coke marketing campaign.

Let's go poke a stick at the auto industry. There was the Pontiac Aztek. The new Ford Thunderbird. The Lincoln Blackwood. The Chevy SSR. The entire Saturn and Pontiac product lines. All gone poof despite the marketing mojo behind them.

Which gets to my point. Whatever you produce must be something an audience wants. Absent from any lecture to a writer concerning social media, establishing a platform, building a "brand," is the need to write a book people want to read. That's the hard part--the art of story-telling and writing. And for that, there are no rules.

I like to use the example of my writer pal Elle Lothorien. Now she's all over the WWW, most recently noted as one of the top 25 most-successful self-published ebook authors. But in the beginning, she self-published her romantic comedy, The Frog Prince, as an ebook on Amazon. As a newbie, she had zilch for marketing and no clue about book cover "rules." Traditional publishers know full well that a potential reader judges a book by its cover. Look what Frank Frazetta's covers did for Robert E. Howard's Conan the Barbarian. The rule is that romantic comedy must be pink. Pink. Pink and more pink. Lothlorien's was green. But that worked in her favor. When readers searched Amazon for romantic comedies, her little green frog swam to the surface of a sea of pink. But what sold and resold The Frog Prince was the quality of the story.

I have plenty of writer friends who've climbed the bestsellers lists without a massive publicity machine stoking the media. They did the usual: a website, blogs, blog tours, interviews, mailings, conferences, twitter, Facebook--and earned some success. And not one of them claimed to have had a brand.

On the other hand, I have other writer friends who have done the same thing--and written some amazing books--and continue to flounder in obscurity.

Moving on. There's no doubt about this platform. Fun and fantasy: 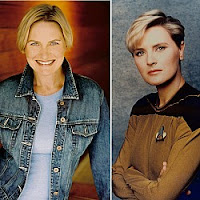 Next weekend, the Biting-Edge team will be in Colorado Springs for GalaxyFest 2012. Special guest star: Denise Crosby--you probably remember her as Tasha Yar! Fully functional, we're sure.

Comments:
I didn't know you'd be at galaxyfest! Cool! See you there!

Great post, Mario. Absolutely true. Every author should have a sign above their desk: It's all about the book.

On my first books I spent all my advance money on publicity and marketing and a radio-show service that got me gigs from Florida to Alaska. I would get up at midnight to do some show in New Hampshire and then get up at four a.m. to do a slot on a rush hour show in Detroit, and I paid the radio-show service for every show they booked me on. I think I was on more than a hundred radio stations when I finished my promotional efforts. I made posters and cards and bookmarks. My book sales were excellent.

By the time I got to round two, my middle-grade, I did nothing but print up bookmarks and order some pens. I just couldn't get up the energy and money to do that all over again. Guess how this book did? Just as well as the other ones.

So put me in the "cynic" column about book promotion. When I see some energetic young author blasting their way into every promotional outlet I admire them from my comfy hammock. Then I order another banana daquiri.

Betsy: For sure. You're buying, right?
Mary: Thanks for dropping by.
Bonnie: It's hard to know what works. There's no magic lever you can pull, otherwise, the publishers would do it for every book.

Why couldn't you have posted this a few month ago, so I didn't spend my time coming up with the perfect brand, New Julie, NOW with Extra, BOLD, EXTREME Flavor. Thanks for nothing, Mario...enjoy the Fest, and watch out for Betsy!

Thanks Mario, for this insightful post that turns our attention back to art. Perhaps branding is more useful for craft-writers.

It's a great time to be a writer. It's refreshing to have Mario remind us not to crawl into little boxes.

So very true. Most of my favorite authors are the ones who write outside of their own box/brand. The ones who I know will have something fresh to say, and a fresh way to say it, every time I pick up their next book.
There are so many stories to be told, why tell the same one over and over? Why box in your art, or yourself?