It's that time for romance...which means?

Depends on a lot of things.

Locally, my pervy artist friends celebrated the month of Eros with the Scorned Lovers Show, featuring the romantic prognostications of the Luv Sultan. 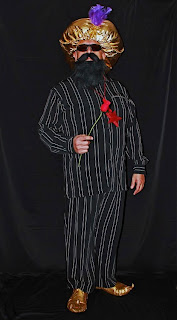 A chance to get sentimental.
Check.

Okay, you can do with that with a good friend or a relative. But would such an occasion be considered romantic? Of course not. We know that consummating the romance of the romantic getaway is getting down. Doing the nasty. That's why the photo spreads always include pictures of the hotel room's bed.

Why do we gloss over the obvious when it comes to sex? Erectile Dysfunction commercials puzzle me. (as it does Bloomberg magazine) Cialis ads show a man and woman in outdoor bathtubs holding hands. Viagra has a cowboy driving a pickup. That would be okay if the commercial ended with the point of taking ED pills--a quick soft-focus shot of the couple rutting like barnyard animals. Before you go ick, suppose you went on a romantic getaway with your sweetie and your most intimate act was to sit in a tub and hold hands? Or drive around in a pickup. Something to brag about? I think not. Now if you told your friends that you were charged by the hotel for a new bed because you and your honey got out of control, I think you'd get some jealous looks.

What are your ideas about putting the RAWR in romance? 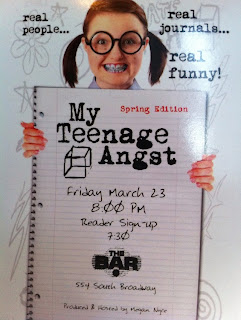 The crazy romantic ideas start early. Check out My Teenage Angst where writers share stories from adolescence about love and desire crashing and burning. The Spring edition is 8PM March 23, 2012 at The Bar on south Broadway.


Though it ain't about romance per se, this will include dirty talk--Next week, Saturday, 7pm February 18, at the Broadway Book Mall, 200 S Broadway, Denver, I moderate a panel of the Denver Area Science Fiction Association, "Salty Language is in Effect: The Outre in Genre Fiction" featuring Jesse Bullington The Enterprise of Death, Jason Heller Taft 2012, and Stephen Graham Jones Zombie Bake-Off.

Comments:
Wen and I have just become empty-nesters. Now we go dancing every weekend. We can dirty dance/grind with the best of those 20-somethings!

Please. The Viagra commercials are bad enough, don't suggest they become even worse. My kids all cover their eyes and pretend to ralph when those commercials come on. Old people, making out? Ewww!

Of course they also make ralphing noises when Bill and I kiss, and the dog tries to bite us when we hug too long. They all think romance is disgusting.

Romance for parents is a locked door and a bunch of sleeping kids. Go to sleep, you little barbarians. Mom and Dad need to "rest."

Bonnie: Those Viagra commercials are made that way because they know no one wants to think about their parents being *romantic* In the meantime, you and Bill get plenty of *rest*

What about holding hands in hot tubs in the back of pickup trucks?