Before we start with our regular programing, let me first pimp Jason Heller (again), who really doesn't need help from the Biting-Edge, as he's already all over the place.

Check out his interview on this podcast from the Arapahoe Library District. Heller dishes on writing Taft 2012, speculative fiction, and his take on Steampunk. Between you and me, the guy is pretty damn insightful and funny.


Though I've been back from NYC for a couple of weeks now, it's taken me that time to settle in and collect my thoughts for this blog. This was my most recent haj to the Big Apple, a benny for serving on the national board of the Mystery Writers of America. The trip was bittersweet as I'm in between contracts, as it were. While there, I reflected on the times I've been to New York and my writing career, the ups and downs, on the fortunes of those in my circle of writers--some of which are international and NYT bestsellers, one snagged a major movie deal--and others, like me, paddle about on the murky waters of uncertainty. I'm not complaining, in fact, I have a lot to be thankful for. Five books from a major NY publishing house, three audio books, was a national bestseller, (plus my books were offered by both the Science Fiction Book Club and the Quality Paperback Club--how cool is that?), a graphic novel, short fiction in several anthologies--I've gotten way past the wanna-be stage. But still...there's much to do with no time to rest on my hairy laurels. 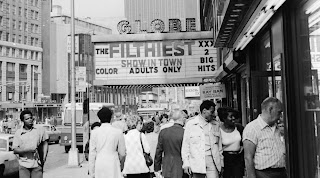 The first time I was in in New York City was during the summer of 1973. My hotel was a block from Times Square and I'd never been to a more filthy and disgusting place, even in the seediest parts of Juarez. I was fresh from the dirt-street barrio of Las Cruces and expected better. This was Times Square, the heart of the greatest of America's cities, and it was rife with hookers and the homeless, grifters, thieves. Porn on an industrial scale. Skin flicks! Stroke shops! The drinking age in NY then was 18, I was 17 but no matter. The titty bar had a two-drink minimum, at five bucks a pop. That made it ten $ to watch a skank dance in front of a smeared mirror above the bar. It wasn't sexy, just creepy even for a hormone-obsessed vato like me. Barkers out front practically grabbing your sleeve and dragging you into the nudie shows. You waded through garbage as you passed block after block of graffiti and broken windows. The city was emblematic of the decline of the American urban center. Trashed out. Impoverished. No way to go but down.

I didn't return for over twenty years. In the meantime, New York didn't give up on itself. I kept up with the news as one mayor after another attacked the decay in campaigns of quality-of-life and gentrification. My family visited one crisp November. Well-versed in popular culture, my sons expected public Mafia hits, bodies floating in the Hudson River, street corners infested with prostitutes. Instead we encountered wave after wave of smiling locals. A Times Square that was clean and family-friendly. A city that truly welcomed us nobodies (and our dollars). 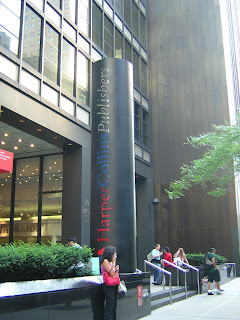 Several years later I finally got published. This time I returned to the Big Apple on business. Publishing business. I visited my agent at his then address in the Garment District. Then the first of many annual pilgrimages to 53rd and Madison Avenue, the home of my publisher, HarperCollins. It was a pinch-me moment, and I tried not to act like a star-struck yokel. My editor, Diana Gill, and I met, chatted, she gave me the nickel tour and I made the effort of thanking everyone for their help. The offices were quiet and decidedly utilitarian. I never once saw the infamous slush pile. Afterwords, Gill and her assistant, Will Winton, took me out for the celebrated fancy-schmancy author-editor lunch. Normally, someone else is footing the bill for grub and drinks, I stuff my gut and pour the free booze down my throat. This time I ordered club soda, and as I felt a little daring, asked for a slice of lime. Our conversation was me tripping down a list of questions I'd written in a spiral notebook. I tried to act cool but was nervous. Gill and Winton have palled around with the millionaire Kahunas in the book business, and this was just me, some lucky scribe from Colorado.

Fast forward to another trip, and a lesson on publishing ranking. Nymphos sold out its first print run within a few weeks after the release and was a national bestseller. This trip I got not only my fancy-schmancy author-editor lunch, but also a special cocktail reception at a tres cool Manhattan watering hole. Later, dinner in Greenwich Village with the head of Rayo, my publishing house. I felt so special, so in the fold.

Jump to another trip. My editor and I had lunch first, then a work meeting in her office. That evening, rather than return to my hotel, I detoured to Times Square and watched Batman Begins. After the movie, I wandered about Times Square, amazed at how awesome it was. Eleven at night and crowded with families. Children. Tourists from all over. A sea of happy faces lit up by the ginormous Times Square signs. Who in the 70s would've believed this was future New York City? Suddenly, from the north, fireworks. Why, it wasn't the Fourth of July? So what, I pretended the festivities were for me. 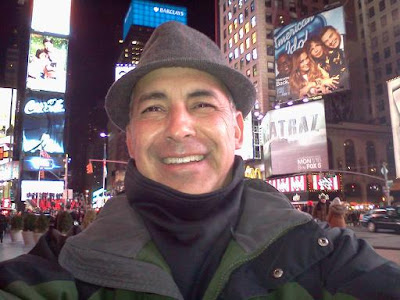 Jump again. The recession wiped out Rayo and took with it a lot people I knew at HarperCollins. Gill and Hinton survived, fortunately. During this last trip to New York I felt like I was walking through the wakes of my previous visits, and I expected to run into myself. Not sure what that meant but New York is there. I'm still here. Writing.

Comments:
Have I told you how much I love you? That was such a beautiful and heartfelt post. I have no doubts that whatever you do next (whether it's the Felix e-book) or signing a multi-book deal, you will do it with grace and style all Mario's.

In case you didn't know, you are the guy I point to when asked, how should an author act? (minus the smut talk, of course) :)

Both bittersweet and uplifting, Mario. Publishing has always been a crazy ride, even more so with the e-revolution. Looking forward to your future books...will Felix make a return appearance? Or maybe another paranormal private eye?

Julie: Style? Me? You're too kind.
Colleen: Thanks for your comments. I've got stuff in the mill.

Mario, I loved reading this. Evocative and heartfelt. Your words have sounds and scents in them. Thanks.

Just how hairy are those laurels?

Julie: Always a style.
Chris: Scents? As in the aroma of the NY subway in July?
Shannon: Hairy enough.

Mario, Fun read! The first time I was in Times Square, my daughter wouldn't leave the hotel to get a piece of pizza. She watched from the window I ventured into the hole in the wall place between the dirty book store and liquor store. Best pizza I have ever had. I am so excited for you with your success in the vampire book world. Keep writing and remember the little people who knew you before the first book. Congratulations!