They say news comes in threes. And this week, we're happy to share three bits of good great news.

Eins. Riding on the coat tails of last week's blog about Steampunk, I have to mention this forthcoming appearance by the queen of Steampunk, Cherie Priest at the Broadway Book Mall, Wednesday, Nov 16, 7PM. 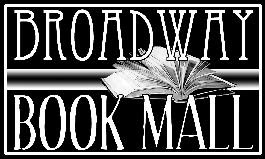 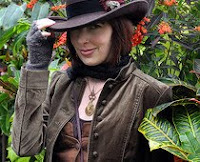 A Nebula and Hugo Award nominee and dedicated fashionista, Cherie will be signing her newest novel, Ganymede. 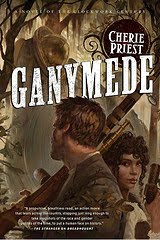 Zwei. Superbrain and fellow oenophile, Bonnie Ramthun, just signed a new contract for a...well, let's have her do the honors:

I'm very happy to announce that I have a four-book deal with Grosset & Dunlap publishing for my LEGENDS OF CENTERVILLE middle-grade series. My agent, Becca Stumpf of Prospect Agency, did an amazing job in landing the deal. The first novel in the series is scheduled for release in March 2013.

Ever classy and effervescent, Bonnie won't dwell on her tortuous and frustrating sojourn in the writing game. She's weathered enough setbacks to demoralize the faint-hearted and less committed. Let's jump through the hoops. A contract. Years with no contract. Her concept for a TV series Gamers gathered teasers from Tinseltown that ended in bupkis. Then a second big contract for the YA mystery The White Gates. Awards. Then no contract. Now's she back at it. In the ring. Hooking and gouging like the literary champ she is.


Drei. To survive in this writing biz you gotta be, if nothing else, nimble and clever. Long-time mystery writing pal CJ Lyons proves she's all of that and more. For her efforts, she got a major shout-out from USA Today for a three-book deal with Minotaur Books to repackage her bestselling self-published book Blind Faith.

CJ can tell you plenty about the trials and stumbles on her way to, and in the midst of, getting published. After her last contract ended, she decided to cultivate her literary efforts by self-publishing her manuscripts as ebooks. The books did well enough to catch the eye of Minotaur, and seeking to bet on a winning horse, they signed her on. Go CJ!

Comments:
I'm with you on congratulating Bonnie Ramthun. She's my RMFW contest go-to girl for YA. Now this. I hope she'll still have time to judge the Colorado Gold. Best to you, Bonnie. Mario and Jeanne, see you at critique.

Hey, is that a monkey on my back? I think it's my writing muse. I always wondered what that biatch looked like.

Thanks for the shout-out, Mario. You rock.

Congrats to all the ladies and thanks to you, Mario, for highlighting them. Cheers.

Terry: Thanks for the props.
Bonnie: The pleasure was ours.
Chris: It's easy to pimp such talent.