A definite must-see. What caught me were the period accoutrements--the costumes, the weapons, the gadgets--so very Steampunk. Then I realized it wasn't Steampunk at all, but historical verisimilitude (more or less).

Which got me to thinking. We've gotten so used to seeing the interplay of Victorian fashion with brass and steel as tropes of Steampunk that we've forgotten that was the way it really was back then.

Which got me thinking some more. What would a Steampunk war look like? Then I realized there had been one. It was called The First World War.

Run down the Steampunk checklist:

Women in long dresses and hats with feathers. 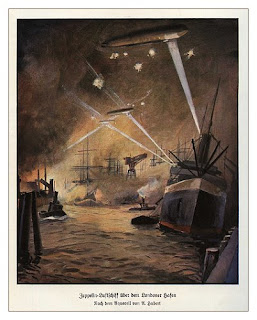 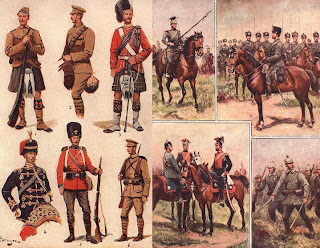 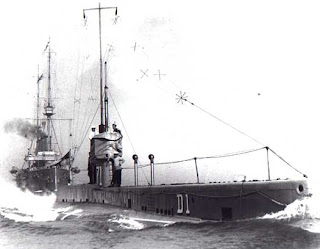 Fantastic inventions like the Big Wheel. The Russians actually built a working version (which not surprisingly, got stuck in the mud). 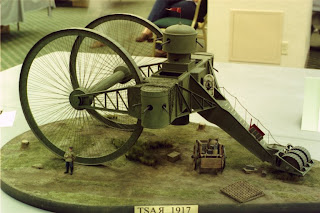 The more practical British decided to flatten the Big Wheel concept into a land battleship (shades of H.G. Wells). 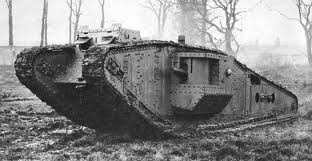 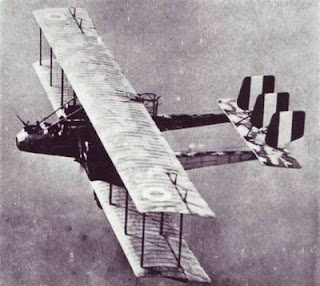 Many young men were caught by the romance of adventure and signed up to serve in The Great War. Ernest Hemingway, for one, and was wounded. F. Scott Fitzgerald was commissioned in the US Army but the war ended before he could go. H. P. Lovecraft tried to enlist but was denied because of his poor physical condition. Considering his pessimistic view of humanity, it's interesting to wonder how much bleaker Lovecraft's assessment of civilization would've been had he served in the trenches. Provided of course, that he survived. 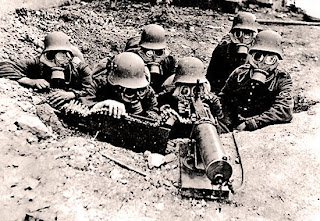 I've often said that I wasn't a fan of zombies or any supernatural monsters. How could they compare with the true horrors of one of the biggest blood baths in history? The same wonders of the Industrial Age that promised prosperity for mankind also delivered slaughter that devoured tens of thousands of men in a day...after day after day for years. The carnage spawned the Lost Generation, artists and writers disgusted with the war and the corruption and stupidity of the governments behind it. You'll find no nostalgia for The Great War in the works of the survivors who penned some of the greatest literature of the Twentieth century such as A Farewell to Arms and All Quiet On The Western Front.

So there was a Steampunk War but it was nowhere as charming and schmaltzy as we'd like to pretend it might have been. 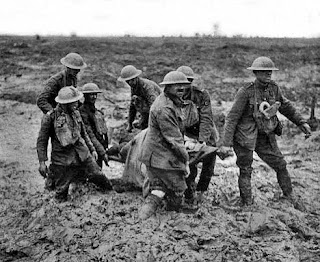 Comments:
A beautiful essay, Mario. Reading the Charles Todd mysteries reminds me of how much we lost to that stupid war; a whole generation of Germans and Englishmen, and following that, the Second World War and the slaughter that went round the world.

Good thing Europe is all tidy and put together today, eh?

Hey Mario... great old pics you found for this. I wonder what they will call today's fashions a hundred years from now? Junkpunk? See you at critique

Bonnie: An irritated Europe but sane, so far.
Terry: Junkpunk? I love it.

hello! just stumbled upon your books, and now your blog. i hope you don't mind if i follow for a while...

is steampunk just beginning, or is it almost over?

Great observation, Mario--I've often thought how "weird" WWI was, in that vein, though never applied "steampunk" to it--but it fits, perfectly!

Really nice, Mario. And I don't say that often. You know my interest in WWI-- anyone who wants to learn more, there's a great series of lectures from the Teaching Company called World War I: the "Great War"-- maybe Susan and I should rethink our book and make it steampunk--truth is stranger than fiction.

Bravo. Lovely piece about an ugly subject. Thanks for the thoughts.

Great observation. Great essay. So very true.
And Terry - I think JunkPunk is the post-apocalyptic future. Skip The Uglies and Matched (Though I loved both) - the real future is going to be SteamPunk meets Mad Max.
Pleather and spikes instead of Victorian pomp.
JunkPunk. Yeah, I like it. Let's write some...

A-LO: Thanks for dropping by. Hope you stick around. My son was a philosophy major.
Frank: Thanks for the comment.
Jeanne: Judging by your critique comments, you'd be good at trench warfare.

Chris: Yes, an ugly subject.
Bree: Maybe I'll write a longer essay about this. Thanks for dropping by.