I get somewhat embarrassed when I'm on panels at fantasy/sci-fi cons, because as I've mentioned before, unlike most of my fellow urban fantasy writers, I didn't read much fantasy, horror, and science fiction during my formative years. Most of the other panelists recite lists of their favorites and I nod, pretending that I'm in the know.

My fiction reading back then was split between the pulps I bought at the used book store and the pot-boiler thrillers my dad brought home. My father would treat himself to a new book and he'd spend the weekend crashed on the couch devouring the latest by Follet, Forsyth, Clavell, Crichton, etc., 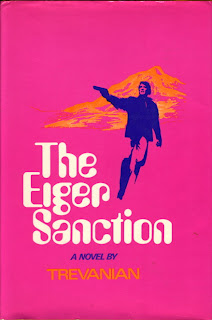 I look back on all the books I've read and can pick off the few that really touched me. Now I have to acknowledge one novel--largely forgotten--that did key into me when I first read it. The Eiger Sanction by Trevanian.

Art professor and collector Dr. Jonathan Hemlock moonlights as an assassin for CII, a supersecret cell within the CIA. His job is carry out sanctions, killings to avenge the murders of friendly spies. A "retired" mountain climber, Hemlock is blackmailed into scaling the treacherous Eiger mountain and sanctioning one of his fellow climbers...unless he's murdered first.

As a young man in my early twenties, chomping at the bit for manly adventure, this book engaged me with its thrills, sophisticated patter and exotic tone. My best friend Ron and I would grab rope and carabiners to climb and rappel the local hills, all the time arguing which of us would make the better Jonathan Hemlock, outfoxing the bad guys and bedding femme fatales. What gave the book its cultured tone were the offhanded references to things it sometimes took years to discover what the author meant. Such as café au lait. That was in the prehistoric days before the Internet and Starbucks. (Back then, coffee was either regular or decaf--or Sanka bleah! ) Even the humongous dictionaries in the libraries were of no help. After weeks of searching, I stumbled upon a reference to café au lait and mystery solved. 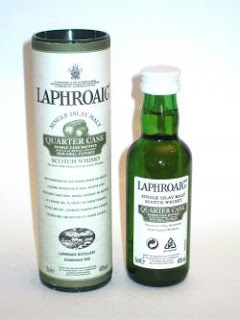 Laphroaig was another challenge. It was Hemlock's choice of hootch and he asked for it frequently. Even Hemlock's enemies knew he drank Laphroaig. But no one I knew had a clue about Laphroaig. It took me two decades before I learned it was a peaty, single malt scotch. About that time I had moved to Denver from Fresno and my first priority in civilization was to find said beverage. Which I did, and I bought several miniatures to send to Ron for his 40th.

Many years (and bottles of hootch) later, I've come to revisit The Eiger Sanction. Why this book? I didn't even bother to keep a copy and there have been other books that I've continually endorsed.

I was curious to find out if Eiger retained its magic. Right before I was first published, I thumbed through a library copy and thought the style seemed dated. Then recently, I decided to give the book another read to see what had made it a bestselling sensation back in the 70s.

Here at Biting-Edge we do a lot of things, all of them consensual and mostly legal, but what we don't do is review books. We do, however, pass along recommendations for books that we enjoyed. I don't feel comfortable offering public critiques on the works of my fellow writers. Bad karma. You want to read negative press then pop on over to Amazon and get your fill of ignoramuses thinking they're being erudite and clever. 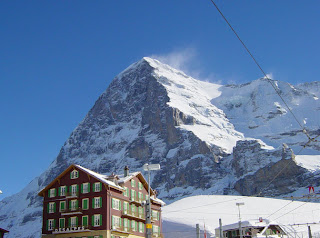 Trevanian stomped all over these rules.

The Eiger Sanction, blockbuster commercial megaseller, starts with...the weather. Fitting as to mountain climber Jonathan Hemlock, the capriciousness of the elements could turn a jaunt up the slope from pleasant to miserable to deadly.

Trevanian weaves in and out of third person POVs and even slips into the royal we.

He drops backstory info dumps by the ton, which explain the why behind the story and stoke the drama.

Big words? We're taught that a reader's attention is so fragile that any mental bump will turn into a yawning excuse to toss the book and play with razors. So keep the vocabulary at mid-grade or below. Obtuse or unusual words will kill your story (though that hasn't hurt the career of China Miéville). Trevanian treats us to Laphroaig, scrofulous, abacination, lepidote, morganatic, and more.

Then what works? Everything. Trevanian hews to a clear story question. He is a master at setting. Pacing. Descriptions. Internalisations. All of his characters are motivated and layered. The emotional and physical stakes are sharpened on every page. Every passage of dialog is a tug of war.

Moreover, the book is a harvest of fresh writing.

***
Jonathan simply opened his eyes, and he was awake. Calm and happy. For the first time in years there was no blurred and viscous interphase between sleeping and waking. He stretched luxuriously, arching his back and extending his limbs until every muscle danced with strain. He felt like shouting, like making a living noise. His leg touched a damp place on the sheet, and he smiled. Jemima was not in bed, but her place was still warm and her pillow was scented lightly with her perfume, and with the perfume of her.

***
He looked across the up-tilted meadow to the gloomy north face of the Eiger. The unstable warmth of the weightless mountain sunlight was puffed away time and again by wisps of crisp highland air.
Touched only once a day and briefly by the sun, the dark concave face hovered malignantly above him, looking as though it had been scooped out of the body of the mountain by some olympian shovel, its brittle gray-black crescent rim cutting into the glittering blue of the sky.

***
Even after the crack petered out and progress slowed, Jonathan's feeling of indomitability persisted. Each square meter of face was a gameboard of tactics, a combat against the unrelenting, mindless opposition of gravity in which the rock was a Turkish ally, ready to change sides if the going got rough.

What was refreshing is that the story lacks the strained earnestness of most modern thrillers--must stop and waterboard al Queda, eco-terrorists, rogue liberals, zombie fascists. Adding to the appeal of the book was the mystery behind the author, Trevanian, the pen name of the secretive writer and film scholar Rodney William Whittaker (1931-2005). As the word processor hadn't been invented yet, I can see Trevanian banging out his many manuscripts on a Selectric. As much as I appreciated Eiger, I can't say the same for all his later works. The Loo Sanction seemed a rushed sequel. Shibumi, his most acclaimed book, I couldn't get into. The Main I did enjoy as a superb mystery and I'll have to reread it.

Comments:
Wow, Mario... a blast from the past. 70's Cheese... love it. Thanks for reminding us of this book and the movie and including the trailer.
As for the rule, not starting with a weather report - I guess since Trevanian, it's been done so many times it's become trite and cliched. Still, if weather works for your story, don't discount its effectivenss. What would "The Perfect Storm" have been like without it?

We watched a re-run of "The Eiger Sanction" in a little dive hotel on our honeymoon. We'd been on the Gunnison river for four days on a flyfishing float trip and the luxury of hot showers, cold beer and a television seemed like a miracle.

The circumstances made it a great film full of romance and suspense. 70's cheese indeed. Haruumph. It was awesome, baby, awesome!

Now I simply must go read the novel...

Terry: Blasts for the past are welcome.
Bonnie: I'm glad the movie stoked fond memories of a dive hotel.

Droog, Good"review" of a book we enjoyed more than most people will understand. I remembered when we discussed who would be the perfect Hemlock in the movie version and we both, as I recall, agreed Clint Eastwood was the best choice ... at least of who was available at the time. I'm past my sanctioning days, barely, but ahh the memories. Who knows, if they ever need us we can always come out of "retirement!" Great work. I guess I will have to buy the movie now for my collection.

Really enjoyed this, Mario. I liked how you admitted upfront that what you read during your formative-reading years isn't what you eventually evolved into writing...I had the same experience. As a teenager, I devoured pulps and anything written by Ian Fleming. And what genre did I first get published in? Romantic comedy. Ha!

Mario,
It's always a gamble for me, re-reading books I loved growing up. Most of them hold up, at least as far as the idea behind them, even if the writing isn't always as good as I remember.

And it's funny how many books from the 60s and 70s violate all those rules we hear and repeat from each other and the industry. Some of them do it with enough storytelling muscle that it doesn't matter. But it makes me wonder if they would be published today.

I had always heard the rumor Trevanian was really Robert Ludlum, but apparently not so. Interesting...

When I was younger I used to always have a notepad handy so that I could write down words I didn't know to look up later. I love the OED! I haven't needed to do that for years. Now I know why.

I used to love books like the Eiger Sanction and The Dogs of War and even John Le Carre for their sense of adventure. I don't think you see that so much anymore. After all, when you have to stop to waterboard the terrorist it's hard to make the time to get to the top of the mountain. Just like Angelina I always wanted to be Bond, not the Bond girl.

Droog: We drank much beer when we haggled over who would best portray Jonathan Hemlock. As I recall, we decided it would be Clint Eastwood on the big screen and me in real life ;-)
Colleen: Fate does have a sense of humor.
Chris: Storytelling muscle? We all need more of that.
Catfriend: I always wanted the Bond girl.

Droog, Funny how beer and time dulls the memory. I believe it was decided that since I couldn't play Hemlock on the big screen (being the undiscovered talent I was and still am) I would just have to do it in real life! Just call me Bond-san.

Thanks for the trip down memory lane Mario. One of my characters (a bad guy of course) has a passion for Laphoraig as an homage. I loved reading Trevanian. When Nicolai Hel started bashing his Volvo in Shibumi, I almost wished my ex hadn't gotten mine. B^)

Many years though, not sure how it might hold up to Connelly, Deaver, etc. But then again I don't think anybody is doing great espionage any more... to much global political correctness?

I've got the movie in my Eastwood collection -- just watched it a couple of months ago. The clothes, hairdos, and language don't necessarily hold up, but the storyline is still great.

Ron: I think Trevanian holds up against Connelly and Deaver. Different writing styles of course but the pacing and narrative are first rate.