When my fellow writers and I get together, we often discuss the books we enjoyed in our formative years. Kat Richardson is an encyclopedia of science fiction, Mark Henry cut his writer teeth on psychological thrillers with a supernatural bent, Jeanne (bless her heart) enjoyed urban fantasy back before it even had a name. As a kid, my reading interests were all over the place, heavy in historical nonfiction--lots about airplanes--and bunches of speculative fiction.

I was twelve when I first perceived the Aha!--the epiphany that these squiggles on a piece of paper could immerse me so deeply in an invented world that I momentarily forgot everything else. That book was The Andromeda Strain by Michael Crichton, and I pretended to be sick so I could stay home from church and finish the book. I had borrowed it from my dad, who like the characters in the story, was a government chemist, though he laughed at the strained earnestness of it all. None of the characters spoke or behaved like any federal civil servants he was familiar with.


Even though I was a book worm, there were plenty of school reading assignments I couldn't digest. I found Jonathan Livingston Seagull a simplistic bore. I slummed through Silas Marner and Wuthering Heights.

But a few assignments managed to break into my stubborn head. 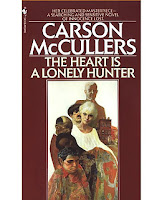 Such as The Heart Is a Lonely Hunter by Carson McCullers. High-school English homework and definitely outside my usual milieu. But McCullers's prose kept me hooked and made me admire the power of the well-crafted narrative.

1984 by George Orwell. This kick-to-the head hasn't lost any of its punch over the years. I recently thumbed through the story to pick up some passages to use in a writing class and I found Orwell's masterful prose incredibly fresh and as disturbingly visceral as anything in a horror novel. Wow.

Brave New World by Aldous Huxley. Another story that remains inventive and crisp and remarkably prescient. Made me ponder the dark consequences of technology.

My private library was the shelf headboard of my bed and it was crammed full of books, mostly paperbacks that I had bought for 15-25¢ at the used book store by Surplus City. One notable read was The Penetrators, a Cold War cautionary tale by Anthony Gray, pseudonym for Hank Searls. That book has been long out of print and despite my fondness for the story, one recent reviewer called it a "poor man's Fail Safe."

My best friend Ron and I used to trade books and a favorite series that we devoured were the Travis McGee stories by John D MacDonald. Those books laid the foundation for my appreciation of pulp noir and seedy characters.

Another book that I reveled in because it fed into my adolescent anarchistic streak was Clockwork Orange, by Anthony Burgess. Ron and I became somewhat fluent in Nadsat and the slang still creeps into our conversations.

Even though I'm an urban fantasy author and a frequent panelist at Science Fiction/Fantasy cons, a lot of people assume I was a keen reader of vampire and supernatural fiction, which I wasn't. I enjoyed learning the myths but I couldn't get swept into the stories like I should have been. Same was true for most science fiction. I found a lot of the books dense and meandering. One exception were the John Carter series by Edgar Rice Burroughs. Thoats. Radium guns. Green giants. Naked Martian women. More fantasy than science fiction but what was not to love?

There was also a collection of short stories that really grabbed me, Science Fiction Terror Tales, edited by Groff Conklin. "Lost Memory", by Peter Phillips really gave me the chills.

One book that I liked quite a bit back then was Siddhartha, by Hermann Hesse. The book was about as spiritual as I've ever managed to finish and at the time (I must've been 16) the story spoke to me. Many years later, my oldest son had this book as his high-school assignment and I took the opportunity to reread it. This time however, as an adult, I found the main character Siddhartha, to be an ungrateful whiner. Get over yourself already.

Another book I thoroughly enjoyed but which does not age well, is The Eiger Sanction by Trevanian (né Rodney William Whitaker). Like the garish pink of the original book jacket, the prose seems dated (though I will gladly trade his sales numbers for mine). However, at one time, I could picture myself the intrepid and dangerous mountaineer sipping Laphroaig and fending off the affections of countless women. Trevanian's later novel The Main, about a police detective in Montreal, holds up much better and is one of the best mysteries I've ever read. 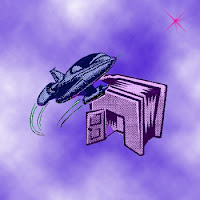 Next weekend, October 21-23, I'm the Toastmaster at the fabulous MileHiCon 43. Guests of Honor include authors Vernor Vinge and Glen Cook, editor Gardner Dozois, and artist Theresa Mather. Come join the fun and shenanigans.

Comments:
You read the same print editions I did; the covers of the John Carter series and the Travis McGee series were so racy for me at the time that I had to bend the cover back around to hide it from my teachers and friends at school.

Hesse, Steppenwolf specifically, is a title I reread from time to time. I too loved Brave New World and Andromeda Strain. Interesting that I like a lot of your favorites! The Gold Coast by Nelson DeMille is what pushed me over the edge from being an avid reader to wanting to be a writer. His sense of humor and the conflict portrayed in the book born of just day to day routines amazed me.

Bonnie: racy? That's a topic for another blog.
Dave: It's amazing how much we writers have in common.

I read works like Wind in the Willows and Little Women when I was little before moving on to Dune, Sidhartha, Native Son, The Magus, and the book with my all-time favorite ending, Grapes of Wrath. - Karen Lin

I remember Bambi and the Black Stallion and Little Women as my favorites as a child. But my father insisted I read Atlas Shrugged before I graduated from high school. A true revelation for me. I tried to read it recently and couldn't slog through Rand's rants, but the story stays with me.

Shannon: I don't think I was smart enough back then to appreciate Little Women though my sister had the book. Anything by Ayn Rand is a slog.

Oh, what an era for covers! Brings back memories--and Groff Conklin! Always loved that name!