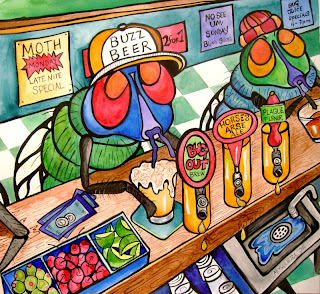 I was at my local watering hole when the conversation among my fellow barflies turned to movies we hated. Not surprisingly, people disagreed on the choices and the same movies could be either praised or ridiculed with equal gusto.
(<-- painting by Jennifer Mosquera)

Two popular movies goad me to fits. The first is American Beauty, which for some bizarre reason, won five Oscars, including Best Picture. This movie is one of the reasons I've come to dislike Kevin Spacey, as I'd already panned him for The Usual Suspects and Seven ( two other movies I hated (see super-criminal remark below) but not to the degree of AM). Why did I dislike this movie? Let me count the ways: 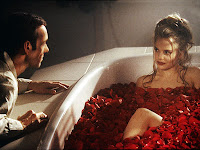 When Lester Burnham (Kevin Spacey) learns he's about to get the ax, he behaves as though he's the only white-collar drone that's ever been booted out the door. But at least he blackmails his boss into a better than average severance package. (A weakly played plot twist.) Then Lester goes to work at a fast-food place to assuage his cynicism. All the while he's lusting after the under-age ingenue Angela Hayes (Mena Suvari--who did little for me.) So while my alarms are screaming Red Alert-Don't Be An Asshole, Lester does the obvious and bangs her. Then there is the retired Marine Colonel Frank Fitts (Chris Cooper), a lugubrious creepy homophobe. And his wife (Allison Janney) is unbelievably unrealistic as a military spouse because no woman could make it through a career in the service being such a thoroughly spineless dishrag. Of course, their son (Wes Bentley) is as wise and clever as his parents are dull. The openly gay neighbors are picture perfect, which is meant to contrast with Col Fitts' latent homosexuality. The upright ex-Marine makes a pass at Lester, gets rejected, and goes on a murderous spree. The movie had many opportunities to turn convention on its head but everyone in this dreck plods along in dopey, predictable steps.

Doggie on hydrant target No. 2. No Country For Old Men. Another Best Picture Academy Award winner, which might explain why I also dislike this movie. Alas, it's from the Cohen brothers, whose The Big Lebowski and Raising Arizona remain among my favorite live-action Loonely Tunes.

What didn't I like about NCFOM? To begin with, Javier Bardem plays the uber criminal Anton Chigurh (unlike Spacey, I do admire Bardem as an actor). Chigurh is practically super-human in his ability to outwit everybody, which I didn't buy. When criminals don't get caught--it's not because they're so smart--it's because of the randomness of their crimes. 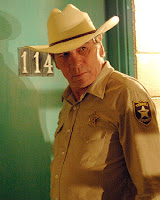 And worse, in this movie, bossy pants Sheriff Ed Tom Bell (Tommy Lee Jones) dismisses all other law enforcement efforts in his chase after Chirgurh, and when he corners the assassin, Bell shits his drawers and lets the murderer escape. Sheriff Bell later gives an eloquent speech that serves as a parable about why he turned yellow (to save his Texas hide). The movie ends with Chigurh wiping the blood of his last victim from his boots and disappearing. At that, I went HUH? People argue that not every crime is solved. True. But that is not the end of the story, especially with murder. If the Cohen brothers were okay with Bell wussing out, then they should've gone to Fargo and enlisted Sheriff Marge Gunderson (Frances McDomand), who though a woman and pregnant, didn't hesitate hounding those murderous perps to justice. 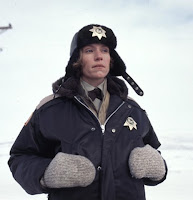 Comments:
I love so much of David Lynch's movies - especially Elephant Man. But the movie I hate the most is Eraser Head! High Road to China with Tom Seleck was the only movie that bored me enough to make me fall asleep. Disturbing: Natural Born Killers, Liquid Sky, Pink Flamingo, Blue Velvett (also Lynch).

I gotta bag on Terry Gilliam, who I used to like, but he seems to have confused being in-your-face horrible with not selling out. Culminating in The Brothers Grimm, a movie that had a great concept and a great cast and could have been a lot of fun if its misanthropic director hadn't decided to shove disgusting moments and characters down our throats. If I'd been alone, I would have walked out of the theatre and I NEVER walk out on movies.
Hey, thanks for letting me vent!

Mario ... first of all KUDOS for being brave enough to diss Oscar-winning movies that (theoretically) everyone loved .... everyone being people with no moral compass and a distorted view of art.

At the risk of alienating all men on this forum, my two most hated movies are ... Time Bandits and Starship Troopers, sadly, both are movies my husband will stop and watch, unblinking, like a zombie if they come on television. They are absolutely PAINFUL and convince me that my time should be spent on something more constructive--like a root canal.

You’re kvetching about these? They’re not even that bad. I like The Usual Suspects. American Beauty? It’s ok. The funny thing about that is it came out at almost the same time as Fight Club, and they’re basically different treatments of the same boredom-with-middle-class-consumerism etc theme. One of them won lots of awards, and one of them is still talked about and referred to. You know which is which. As for NCFOM I grant you it’s no Raising Arizona, Fargo or The Big Lebowski, but imho it is the least bad of the movies adapted from Cormac McCarthy novels. Because… I CAN’T STAND Cormac McCarthy. Don’t like his style, don’t like his stories, do not understand the awe at all. I tired reading All the Pretty Horses and couldn’t take it. Forced myself to watch the movie. I would have enjoyed a dental appointment more. The Road? I fast forwarded through a lot of it, and even then I saw too much. I got the point with the first hammer blow to my head. I didn’t really need to watch every excruciatingly awful scene of that dreck. Seriously. So awful I would rather watch all of the Twilight movies again in their spectacular awfulness than be forced to watch The Road or All the Pretty Horses in their entirety (at least we get a half naked Taylor Lautner in those). I think I’ve found the worst double feature ever!

But here’s what I’ll rant about: that so few movies now are made by and for actual adults, especially female adults. Can you see The Sting, Chinatown or Taxi Driver being made today? Or The Graduate? You remember, movies with actual themes that appeal to those who’ve already finished high school, movies that have actual dialogue. Even movies that are nominally made for adults that are allegedly “intelligient”, an Inception, for example, are maybe aiming at the 18 or 19 year old male. If you’re going to argue back “What about The King’s Speech?” I’m going to ask you how it differs substantially from a Masterpiece Theatre from the 1970s. And women…Yeah. It’s been my personal experience that women engage in a lot more occupations that waitress and hooker, and engage in an awful lot of conversation that doesn’t involve boyfriends and husbands. Someone from another planet watching the current crop of flicks might not realize that. But hey that’s just me.

Generally 98% of the Oscar nominees send me screaming to the hills. I go to the movies to escape. I am also not overly fond of the male bonding flicks, but that's just me. And I'm not sure I can say much in nay since I snort laughed my way through 'Bridesmaids' and can't wait til tomorrow when it comes out on DVD.

I appreciate the venting. However, if I told you my favorite movies, you would all roll your eyes.

I never understood the draw of "Usual Suspects" as well. The best thing about "American Beauty", imho, was Wes Bentley's performance... some of the visuals were quite nice, but otherwise, blech. The only Kevin Spacey performance I've ever really enjoyed was Lloyd in "The Ref". The scene in which he, after being interrupted numerous times by his horrid family members, smacks the Christmas tree repeatedly with the poker and yells "Excuse me! Excuse me! EXCUSE ME! EXCUSE ME! If you don't mind, the 'corpse' still has the floor!" still makes me laugh.

Birdy: Good line! I don't hate everything Kevin Spacey is in. I liked him in L.A. Confidential and Horrible Bosses.

Vickie: my movie faves are a post for another time. Stay tuned.