It's the dream of every novelist. Your debut novel scores a fat advance. And a movie deal. Your publisher pulls out all the stops to market the panties off your book. Buzz for your novel sizzles everywhere.

I'd like to tell you, dream on pal. But it does happen.

In fact, despite the cold shoulder most writers get from publishers, their editors are always on the prowl for The Next Big Thing. Winner to get scads of fame and dump trucks of cash.

You can do it. All you need is this simple formula: young love + fantasy = drama.

After Harry Potter ran its course, New York was out in the hustings, beating the brush for their anointed one. Out of the blue, they discovered Stephenie Meyer, a Mormon suburban housewife whose tale of chaste human and undead lovers was inspired by a dream. So this unlikely source begat the biggest vampire craze ever.

We're aware of the Twilight backlash, and so you're probably familiar with this bit of snark from the Master of the Macabre, Stephen King:

"Harry Potter is about confronting fears, finding inner strength and doing what is right in the face of adversity. Twilight is about how important it is to have a boyfriend."

I'm not going to critique or defend Meyer's books but I will point out that King, for all his smarts, missed the point of the Twilight fables.

(Sidebar: I never read any of the Twilight books, they're not for me. And I seldom read horror, either. Or much fantasy. I lean toward hard-boiled mysteries where sketchy people do dastardly deeds. Vampires? A zombie plaque? Yawn. But a crack head breaking into my house and gutting me for pocket change--that I can relate to.

I'm often complimented on my luck to have written vampire novels during the Twilight meme. About the only thing Twilight has done for my career is remind me how low I exist on the publishing totem pole. All but the smallest dogs can pee on me.)

So the point is, Twilight books are the few I've heard discussed at length at parties, in cafés or bars. Only by women, for sure. Note the key word: women. Sixty percent of fiction readers are women. A lot of critics dismiss Twilight as an adolescent read for naive teenage girls. Yet I've heard worldly, experienced, even skanky-type females gush over Meyer's stories. Not all women, but enough (along with the teenagers and tweens) to have made the Twilight franchise a behemoth that kept the publishing industry from sinking like a dying tuna. During the darkest days of the recent publishing implosion, Meyer's books represented 18 percent of the entire publishing market. So while horror, science-fiction, traditional mystery, and literary fiction lost readers (or more correctly, buyers), novels about love--romance-->finding a boyfriend<--continued to sell big time.

Which brings us to The Next Big Thing, The Night Circus, by Erin Morgenstern. The story premise? Young love and fantasy--in this case, magic. (Where have we seen that formula before?) Which garnered six hundred large as an advance from Doubleday. Summit Entertainment bought the world rights and is shopping for a television deal. Morgenstern's path to success hasn't been a gilded ride--she's had her share of setbacks and stumbles--but the Gods of Fortune smiled on her. We'll see if the hype pans out. It doesn't hurt that considering her audience, Morgenstern's publicity photo looks like this: 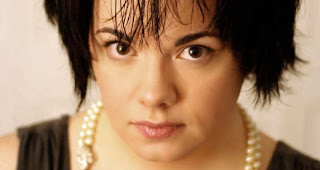 As opposed to the picture of this scribe-to-a-vampire: 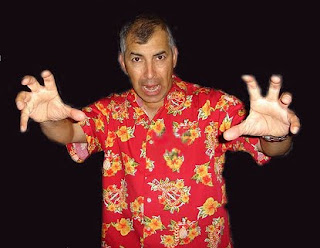 There you have it, the secret formula for literary success. Young love plus fantasy. You have no excuse not to be a filthy-rich author.

Romance is the backbone of the publishing industry. :)

So, you're saying the only position for writers in the publishing industry is ... prone.
(Though if we're being picky, Meyer published Twilight while Rowling was in the midst of her hot streak with Potter--they were basically competing only with each other for world dominance toward the end there.)
But your point is a good one--nae, a great one.

That's a wonderful photo of you, Mario. May I post it on one of my Halloween-themed Chiseled in Rock blog posts in October? :)

Mario, you are, by far, much cuter!

Excellent insights. I am not seeing huge demand for Night Circus t the library, but this tells me it will probably explode soon.
The Twilight franchise was 18% of the publishing industry's sales? That's scary.
Alice

All I needed was this secret formula and you've given it to EVERYONE? Now how will I get famous?
Dang and sigh...
Great pic, btw!

The other half of Stephenie Meyer's secret formula: Bella Swan is a blatant, unrepentant "Mary Sue" of a character. Enough to where Bella became the "Mary Sue" for millions of adolescent girls, not just the author! Droves of girls and women imagined themselves in Bella's shoes. Even her harshest critics have to admit Meyer made a powerful connection with her audience. All via "Mary Sue".

Thanks for your comments everybody. I'm thinking of buying a string of pearls to match Erin Morgenstern's like in her publicity shot.

Alice ..... don't forget that of that 18%, a big percentage of that was teenaged boys who bought the book just to carry around so teenaged girls would talk to them! (You laugh, that's how my son got his girlfriend ... well, okay, he did actually read the books, but he had friends who borrowed it to carry around)