Wednesday, July 13, 2011
I think we ARE in Kansas... I know many of you live in CO-- what the fuck was that storm last night?????? I've never experienced an hour of solid thunder and lightening...not the flash, crack kind but the strobe-light-and-ground-shaking-earth-moving-never-letting-up kind. I love the rain and my lawn has never looked so good but last night was downright scary.

In other news...Mario did a very good job of recapping the Fox news thing-- my biggest complaint is that if this "researcher" had read either book, there is no way she could have confused them. In any case, it's over ...at least I think it is! I must admit, though, my new title, "Corrupter of the Youth of America", was kind of cool.

So, who's going to see Harry Potter the first night? Let's post a few reviews..I'm sure I won't see it until next week sometime (I'll be in San Diego for ComicCon) so I'm curious to hear what your reactions are.

And speaking of ComicCon, here are the details of my panel:

Should be fun. And the rest of the week is full of visiting and eating and sneaking in to see some of the panels. No Joss Whedon stalking this year. I've given that up. And James Marsters isn't attending so that's out, too. I did hear that Daniel Craig and Harrison Ford would be hosting a sneak preview of Cowboys and Aliens but since that means standing in line for four hours, I'll pass on that one, too.

Hmmm. I must be getting old.

Plot Device--I want one of these!

Another video--this from CJ Lyons--that I think a lot of our writer friends will appreciate:
5 Easy Steps to Format Your Ebook

I think it's just about time for True Blood's new season to begin, isn't it? Seems the fans of TB are taking things seriously. This from Variety :

A long list of items will be in play this summer, as the new season of "True Blood" kicked off June 26. Six different versions of "True Blood" V-Moda headphones will hit stores, priced from $39.99 to $199.99. Both Sephora and Ultima stores will carry upmarket cosmetics line Tarte's new "True Blood"-branded cheek stain, lip liner and an eye shadow palate that comes in a specially designed box, with prices ranging from $24 to $52. And high-end handbag purveyor Hammitt will feature a new line of "True Blood" bags named after five of the show's characters. Prices for the bags, available only at select retailers, will land between $395 and $675.

Coolest Bookcovers for 2011 (so far) from Huffington Post This is my favortie: 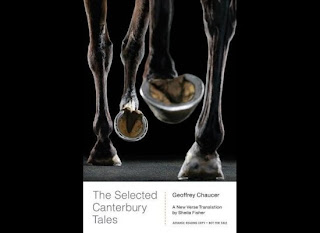 And one last thing, I've posted my schedule for the release of Crossroads. I hope to see some of you at one or two of the events. In the meantime, this is something I'm doing next month as part of the RomCon experience. Mario made the poster. Ain't it grand???? 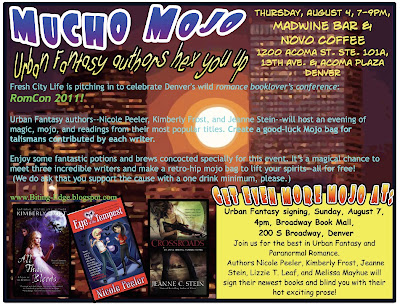 What's going on in your world???

Comments:
Okay, next time I see you I am making you a "Corrupter of the Youth of America" sash.

Have fun at SDCC, that is *so cool* that you're doing panels.

Okay, going to bunker down for Carmeggedon, the grat LA car-pocalypse....can we exist without the 405 freeway for a whole weekend? Who knows...

http://tartecosmetics.com/tarte-for-true-blood....would that I could carry this look....

Trying to get my schedule worked to make RomCon and the signings at Broadway/Who Else Books.

Would love to be able to be in San Diego for that panel!!! What a fab lineup of strong women!

Yikes, Suzanne-- I can't even imagine what it will be like in LA without the 405....the end of the world as we know it!!

Have you stocked up on provisions?

I agree, Vickie-- should be a good one. Hope you can work out dropping in on those signings. Are you planning to come to RomCon? We can certainly do lunch or breakfast or....

No, not really, I have my author photos and my writers meeting this weekend. Fortunatly I don't live near that interchange...I do drive through it every day for work tho, yeah, I'm leaving work early today. I think they're closing it at 7 pm...