Summer has finally arrived and here in the Biting-Edge headquarters, we've stripped to our skivvies and are sticking to the vinyl upholstery, it's that hot. Admittedly, not Dallas or Atlanta hot, but we're miserable enough to complain. 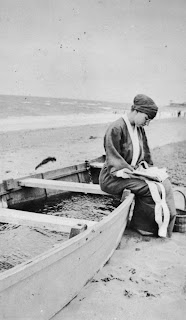 If you're lucky, the best way to ward off the summer heat is hiding in a place where you can dip at your leisure into the water. Once you've done that, survive the doldrums by: indulging in a cool adult beverage; and losing yourself in a good beach read.
If you're jonseing for a good great beach read, then pick a book from one of my favorites authors, Carl Hiaasen, the master of skeevy characters and sarcasm. Admittedly, it's been a while since I've cracked open a Hiaasen book, so it was a delight to return to his world of the treacherous and the perverted, in this case, his most recent novel, Star Island. We're treated to another masterful and biting satire of pop culture, big business, and Florida politics, served hot and hilarious. 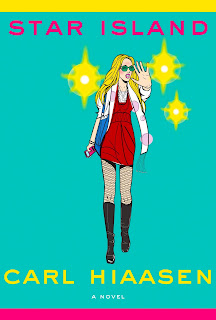 Hiaasen's wields his prose like a chef's knife, expertly chopping the objects of his ridicule into delicious bite-size morsels. As when a doctor is summoned to aid the amoral and moronic music star, Cherry Pye:

"Upon arriving at Room 309 of the Stefano, he'd found the starlet nude, speckled in sunflower husks and twiching like a poisoned cockroach on the carpet. The bodyguard had pulled the doctor aside and provided a list of all known subtances that the girl had consumed during the night, and the approximate amounts. It was the doctor's earnest desire to be free of this crew before those three hundred milligrams of Dulcolax kicked in."
(In case you don't know, Dulcolax is a laxative)

Later, Cherry Pye is forced to attend the Rainbow Bend rehab clinic, where she hooks up with Methane Drudge, a rock-n-roll drummer also on the mend. They climb the clinic wall to escape, and Methane wrenches his ankle.

"When Methane said his leg hurt too badly to continue, Cherry told him to man up. They couldn't call for a ride because neither had a cell. Rainbow Bend had confiscated the devices upon admittance, due to a problem with patients secretly phoning their drug dealers, who would ditifully drive out to Malibu and lob Baggies of pills, rocks, buds and powder over the wall. On some mornings the serenity garden looked like the Customs locker at LAX."

"But beaches weren't Bang Abbott's favorite place to work. Concealment was difficult, and the lighting conditions were often bright and harsh. Worse, beaches were usually hot, and Bang Abbot was miserable in the heat. He perspired in unnatural spumes, soaking rapidly through his shirt, cap, even his pants. The odor didn't bother him so much as the stares; it was impossible to be inconspicuous while dripping like a Nile hippo."
I wanna write like that.
What summertime reads are you looking forward to?

Comments:
We are heading for Steamboat this weekend to do our annual 4th of July weekend escape o' the smokin' heat.

I, too, love Carl Hiaasen. He had me at STRIPTEASE and kept me with SKINNY DIP and NATIVE TONGUE.

Vickie: I'll put BLOOD OATH on my TBR pile. Have fun in Steamboat and stay safe!

You've hit on a lot of my favorite things--a hiding place where I can dip at my leisure, adult beverages at said hiding place, and Carl. Does the latest still have Skink? BTW- the word verification for this is good--punrutgu. It just sounds sordid.

Shannon: Thanks for dropping in. Yes, Skink does play a big role in Star Island. punrutgu? It does sound sordid. Might be my new pen name.

Aw, you're making me nostalgic for Hiassen's hilarity. I've got "Feed" by Mira Grant on hold at the library--that'll be my next summery read (viruses, zombies, conspiracies, yada yada.) Thanks for the review, fun stuff.
(Darn, the CAPTCHA was better before--"styletessa." This one just says "ouning" which sounds like someone yawning and saying "awning.")

Chris: those CAPTCHAs are iffy.