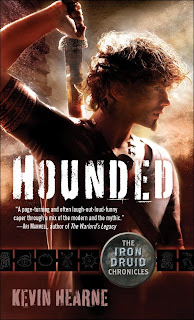 Thanks very much to Jeanne and Mario for letting me hang out here! I’m peppering a whole bunch of League blogs today for my urban fantasy debut, Hounded, and you can see the full list of stuff I’m up to over at my own blog.

I had some Twitter peeps suggest to me that I write about my path to publication, so I decided to do that over the course of a few blogs: the genesis of the idea is on John Scalzi’s Whatever blog in his feature called The Big Idea; my twenty-year epic journey is on the blog of fellow Leaguer J.F. Lewis, and here’s where I’m going to share a bit about queries.

I wouldn’t say my query was the bestest ever. Not even close. I sent it to twenty-four agents and got nineteen form rejections, three partial requests and two full requests. Lots of people get better results that that. Luckily, one of the full requests offered me representation and he sold the series in two weeks at auction. (And that’s a lesson right there: twenty-three agents said no to a manuscript that was quite acceptable to four publishers. Everyone has different tastes and you have to be persistent until you find the right match.)

I had zero contacts in the industry and no publishing credits, so I simply began with the pitch itself—either the story would be interesting on its own merits or it wouldn’t. At the end I put in a word count, hinted I had a series here, and then gave them exactly what they wished for in terms of their submission requirements. Some agents want ten pages, or the first three chapters, or whatever. Read their requirements and follow them! They’re all different on purpose because whether you follow them or not is a big hint about what you’ll be like to work with. Don’t tell them your friends really like it or that it will sell a million copies, or commit any of these other sad (but true) errors you'll find on Slushpile Hell.

Atticus O’Sullivan has been running for two thousand years, and he’s a bit tired of it. After he stole a magical sword form the Tuatha Dé Danann (those who became the Sidhe of the Fae) in a first century battle, some of them were furious and gave chase, and some were secretly amused that a Druid had the cheek to defy them. As the centuries passed and Atticus remained a fugitive—an annoyingly long-lived one, at that—those who were furious only grew more so, while others began to aid him in secret.

Now he’s living in Tempe, Arizona, the very last of the Druids, far from where the Fae can easily enter this plane and find him. It’s a place where many paranormals have decided to hide from the troubles of the old world—from an Icelandic vampire holding a grudge against Thor to a coven of Polish witches who ran from the German Blitzkrieg.

When Atticus hears from the Morrigan that his nemesis, Aenghus Óg, has found him once again, he decides to stay and fight rather than run. In so doing, he becomes the center of power struggle amongst the Tuatha Dé Danann where the sword he stole is the key to a plot to overthrow Brighid, First among the Fae.

Hounded is complete at approximately 82,000 words, and is the first book in a series of urban fantasy novels about the American Druid, for which I am seeking representation. I’ve enclosed a brief synopsis and the first fifty pages for your review. May I send you a copy of the entire manuscript? I have included a SASE for your reply. I look forward to hearing from you soon.

This letter didn't include any of the subplots or supporting characters in Hounded that early reviewers are responding to; a query letter can't contain all of that. You have to sell your main plot and hint at the rest if you have the room, but keep it short and enticing. The whole point is to get the agent to request your manuscript, after all, so that they can learn all about your subplots and supporting cast for themselves.

Again, my query letter isn't the zippiest ever. I'm much better at writing books and being a smartass than I am at writing a one-page sales pitch! But it's a necessary part of the biz, and one you have to acquire some competency in if you ever want somebody to read your work. Writing guest blogs during your release week is another necessary part of it. :)

If you'd like to read the first six chapters of Hounded for free, you can click here and find that as well as other goodies. It's available now at all the cool places you normally buy books. Hope you enjoy, and thanks to Jeanne and Mario for letting me sprawl out here!

Our pleasure Kevin. Sell tons o' books, then give generously to our bar tab!

Comments:
Very nice query, Kevin. It sounds like a way cool story (of course, I'm quite partial to the Tuatha de Danaan). I'm looking forward to picking this one up! Good luck on your blog tour and congratulations on your new release!

Kevin, your story's premise sounds spectacular and I will most certainly be picking it up as soon as I have a chance. Since I can't really think of another story off of the top of my head that even resembles the blurb you posted, it seems all the more intriguing.

As a side note, anything can be made better by adding a stolen magical sword. That alone makes it worth reading :D

Leia said:anything can be made better by adding a stolen magical sword. That alone makes it worth reading :D

And the hottie wielding it ain't bad, either! :-)

I've run into your cover somewhere before lately. Sounds like a fun read! Good luck.

Marne and Leia: I knew a story about a hot Druid and his magic sword would get your interest.
Betsy: It IS a fun read.
Jeanne: Calm down. It's a magic sword! not a magic pen... well you know

Thanks for sharing, Kevin! I always find people's success stories to be fascinating. Out of twenty-four agents, five requests sounds awesome to me. Congrats! Obviously your story is very intriguing. I look forward to reading it!
I think I'll link to this post from my blog.
And do you get paid to be a smartass? Where do I sign up for that job? :)

I found it very interesting to see an actual query letter, and I thought it was very well done. No wonder it worked, and I hope you sell tons of books. I know I've got Hounded on my wish list.

Lesley and Barbara: Thanks for sharing the love!