My spy sent this photo of Jeanne sandwiched between Richelle Mead and Nicole Peeler at RT2011. Jeanne tries to look sober though you should notice the open bottle in front of her. Busted! 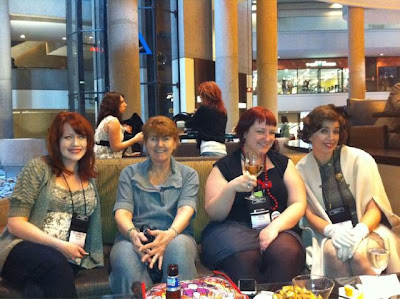 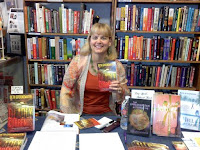 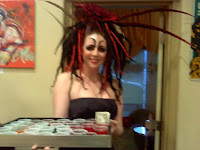 The evening progressed to an art show at Vain Salon, uptown home to the hippest hairstylists in the city. Jamie modeled make-up and hair while handling out Jello shots (there's always room for Jello!) 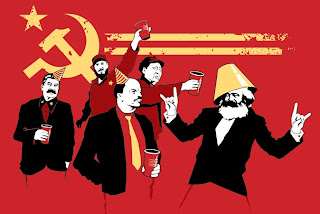 I love the details behind great stories. Director Elia Kazan and screenwriter Bud Schulberg became pariahs in Hollywood for testifying to the House Un-American Activities Committee (HUAC) where they admitted to having been Communists and giving up names. Kazan and Schulberg had joined the Communist Party because they saw communism as a force for progressive social change, a theme in their movies. The two became disillusioned when they recognized communism as a legitimate threat to the United States and that many of their writer friends in the Soviet Union had disappeared (i.e., murdered by Stalin). Kazan's earlier work such as Gentleman's Agreement (a 1947 movie exposing bigotry and anti-Semitism) were straightfoward stories about clear-cut moral choices. His experience before HUAC changed his outlook on life, and his story-telling turned noirish with deeply ambiguous moral dilemmas.

Kazan and Schulberg followed their Marlon Brando classic On The Waterfront (1954) with A Face In the Crowd (1957), an amazingly prescient satire of how media and marketing shape our politics. For many of us used to seeing Andy Griffith as the honest, folksy hero in The Andy Griffith Show and Matlock, you'll be astonished by his screen debut as Larry "Lonesome" Rhodes, the kinetic scheming bum who brays his way to fame and fortune. The man burns with the raunchy, incandescent energy of a punk rocker strung out on speed. Urban myth has us believe that 1950s America was all Harriet Nelson, but the infamous Vitajex commercial holds its own with anything you'll ever see on cable. Gratuitous camel-toe and pills that restore your manly ardor.

Compare the details with Mad Men. The two-faced executives. The decorative, over-coiffed women. The quaint hand-lettered show cards instead of PowerPoint. The skirt chasing that would make any modern HR staffer cringe at inevitable sexual-harassment lawsuits.

We see Lonesome Rhodes revel in his power, cynical and creepy as a mad scientist.

What is the background behind your favorite stories?

Comments:
Thanks for the shout-out and pic, Mario! And thanks for coming. You made the event fun. :)

I'm going to see "Atlas Shrugged" this Friday. I'll never forget reading it for the first time. Ayn Rand escaped the communist Soviets and made her way to America, to become a best-selling author, screenwriter, and non-fiction writer. (She also had a personal life that rivaled Charlie Sheen and Lindsey Lohan combined, but oh well.)

To quote "Galaxy Quest," she "never gave up, never surrendered." That's an inspiration.

Beth: I had to show up or I'd get paddled!
Bonnie: You're going to see Atlas Shrugged? Did you lose a bet? Ayn Rand did sow her share of wild oats and had a public thing for Mickey Spillane.