Shout Out to Biting-Edge pal, Jeanne, for her terrific interview in RT's All Things Urban Fantasy, where Para is normal! She'll be at RT 2011 next week and promises to behave herself. Ha! If you see her in the hotel (stumbling, no doubt), snark her for me.

This last Saturday, Jeanne and I were panelists at the Pikes Peak Library District, 5th Annual Mountain of Authors. Say what you will about Colorado Springs, they sure know how to turn 'em out for a literary event. It was SRO throughout the day.

Another Shout Out, this time to our hosts from the Pikes Peak Library, Becca and Krista. 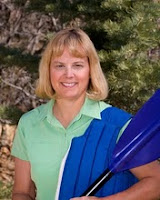 Since we were on her home turf, Beth Groundwater was there, sans paddle.

One of the treats at these events is the opportunity to meet some wonderful fellow authors, in this case, Teresa Funke. 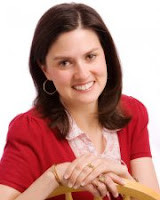 She presented on the Publishing panel and shared her rather circuitous route to publication. Funke's interests are those unknown stories of World War Two which she documented in:

Remember Wake, Dancing in Combat Boots, and her Home-Front Heroes series. Two literary agents loved her work, and editors remarked that they loved her work...only they didn't think there was an audience for those stories. Since Funke was concerned that WW2 veterans are dying off, rather than wait until the publishing world comes around her way, she decided to self-publish so that the veterans and their families can see themselves properly acknowledged. Funke admitted the life of a writer can be an exercise in self-torture and despair, and she quits writing twice a year...then gets up the next morning and starts banging on the keyboard. And it's paid off as she's managed to carve a successful niche for herself as a writer and publisher.

The headliner was Jerry B. Jenkins, author of the wildly successful Left Behind series with over 70 million copies of his books in print. (Break me off a piece of that Kit Kat bar!) Not surprisingly, considering Left Behind is based on End Times prophesy from the New Testament's book of Revelations (and we were in the Springs), one woman couldn't help but approach our tables to proselytize the message to prepare ourselves for the Rapture. I noted that she skipped me. Guess I'm a lost cause. 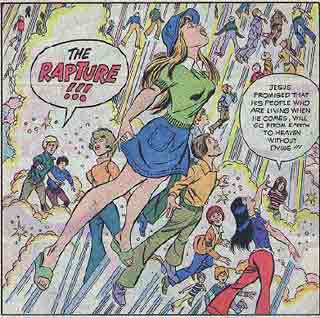 I wonder if even the most devoted of Evangelicals believe that fervently in End Times prophecy. The next time someone preaches to me about the Rapture, I'm going to ask him or her about their IRA and 401 (k).

Jenkins was scheduled to speak for an hour, and I was concerned how anyone could gas on for sixty minutes without driving the audience to yawns and relentless clock watching. Well, I could've listened to Jenkins for another hour, he was so charming with his wit and self-effacing humor. He related a story of eating Big Macs with Steven King in a drive-thru. A professional writer all of his adult life, and most of it as a sports writer, Jenkins is a man enchanted with the beauty and power of the well-crafted word. He said good writing inspires him, but really good writing humbles him to the point that he thinks he has no business writing at all. I feel like that too often.

Comments:
Congrats, Jeanne. Have fun at RT. Nice blog, Mario. Love the caption on the cartoon. Blessed be those of us skipped by the proselytizers.

You should have pointed at your crotch and said, "I got your rapture right here, baby."

Mario and Jeanne shined on their paranormal panel! I could have listened to you three for another hour.
- Beth

Vicki: We are all blessed in many ways.
Nicole: I've tried that. Hasn't worked.
Beth: Thanks for the props. Next time bring your paddle. I mean the rafting one.

Love your blog. Just has to be said.

My favorite rapture picture is on this tin of mints:

"For those of us who aren't going anywhere." Ha!