There's a saying in baseball: When you hit the ball, don't forget the follow through.

When you get published, one of the big eye-openers is how much self-promotion you must do--the follow through. It's not enough that you've written a brilliant book: now you have to hawk the damn thing. Years ago, a website was cutting edge, especially if you had a newsletter. Then came blogging. You not only slapped together content for your own blogsite, but were expected to do a lot of guest blogging and virtual book tours on others' blogs. Soon afterwords we had social media. MySpace splashed big then sank, torpedoed by the much handier and more intuitive Facebook. Now we have Twitter-mania.

All this noodling online is piled on top of the time you must spend arranging signings, book club and library talks, radio and television appearances, coming up with pitches for conference programs. Basically, scrambling for any opportunity to stump your stuff (while writing your next book on the side).

We authors try some old-fashioned swag to help you remember us like... 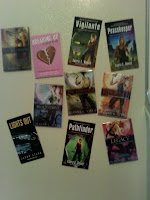 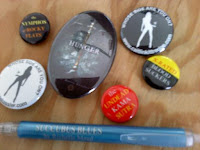 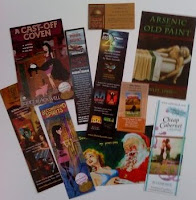 While it's hard to calculate exactly how much good these bits of blatant self-promotion may actually do, it is gratifying to attend a far-flung conference and see your button hanging off a fan's badge lanyard. Yes!

What prompted today's blog was running into this parked outside the Illegal Grounds Coffee House in uptown Denver. 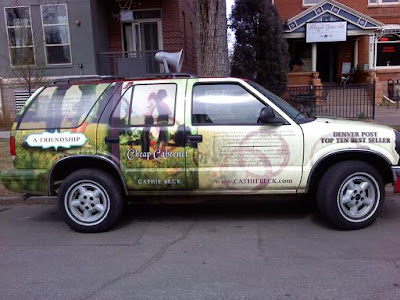 An SUV done up as a rolling press release. Not only was the truck covered in snazzy advertising film but also carried a loud speaker for God knows what audio promotion? 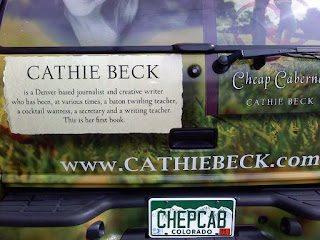 So who was the author, Cathie Beck? I went inside the coffee shop and found her with a friend ordering coffee. Beck was a friendly blonde oozing charisma, her voice spiced with a darling New Orleans accent. She explained that she had gotten the film in trade for marketing work she had done for a graphics company. Though seemingly cheesy and garish, Beck told me it was a surprisingly effective promotional gimmick, having snagged her interviews and book club appearances. And the loud speaker? She plays music to imbibe by.

There's a saying in the publishing business. Never say never. There is always an exception. For example, our own Jeanne was told that a book published by a small press would never get picked up by a major NY house. And we know what happened. 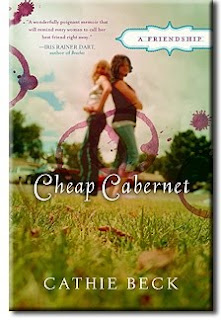 Cathie Beck shared her exceptional story. Her manuscript had been rejected by 68 editors during two rounds through the NY publishers. Frustrated though not beaten, she decided to self-publish using Amazon's print-on-demand. We authors have heard the sermon many times: Self-publish and you might as well tie cement bricks to your career. Offering your book as print-on-demand is literary euthanasia. But Beck had faith in her book. She leveraged her skills as a marketing pro in a relentless marketing campaign that made Cheap Cabernet an Amazon Number One bestseller. Then came juicy vindication when ten of the editors who had previously rejected the book contacted her with offers. She sold the rights at auction to Hyperion.

Beck explained the publishing business using an appropriate Southern metaphor: if your dog goes off into the woods and dies, don't expect to get anymore book deals. 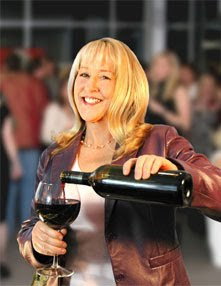 Considering the title of her book, Beck has cleverly branded herself as the Denver Wine Wench. And we at the Biting-Edge are all in favor of wine...and wenches!

But she's gone far beyond pushing her book or tempting the world with the pleasures of the fermented grape. Check out her events page. Clearly, Cathie Beck is a woman who knows the value of the follow through.

Comments:
SHE'S POURING WINE WITHOUT LOOKING AT IT! That probably wasn't the message of this post, but there's some mad pouring skillz! ;-)

She's an expert, for sure. At drinking, pouring, and pimping!

You're both VERY correct! Am an expert at all of the above -- whether I want to be or NOT!

Holy Kawow. I thought I was gung-ho when it came to promotion. I think I love this lady. Hat's off to her for such an innovative technique and being so driven.

Buying cans of spray paint as we speak! My neighbors car will look lovely with my book title across it, don't you think?

Cathie: Glad that you dropped by. What an amazing story you had to share. Thanks. (Though next time, we're expecting wine)
Dave: Yeah, we can all learn from Cathie.
J.A.: Send pics!