Wednesday, February 16, 2011
Let's Start With A Smile Lots of stuff this week, but first: 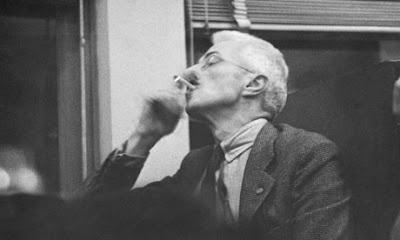 From the Guardian UK :

A cache of unpublished works by famed writer Dashiell Hammett, often seen as the father of hardboiled detective fiction, has been found and is set to be unveiled in America.

Hammett, whose best-known work The Maltese Falcon was made into a film starring Humphrey Bogart, died in 1961. Now 15 unpublished short stories are to hit the bookshelves after being unearthed by a magazine editor, Andrew Gulli, among the literary archives of the Harry Ransom Centre at the University of Texas in Austin.

Gulli will now publish one of the stories in his crime fiction magazine, The Strand, later this month. He hopes to eventually help publish them all as a collection in a new book. 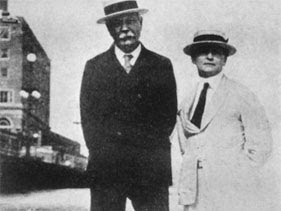 Syfy had been negotiating for Among the Spirits, a drama series project about Houdini and Doyle solving mysteries in 1920s, with the deal closing at the very time the feature announcement was coming out. "I guess there is something in the air about that whole time period and that very interesting relationship between Houdini and Doyle," said Syfy's president of original programming Mark Stern. (Both Syfy brass and the producers of Among the Spirits first heard about Voices from the Dead from reading our story.)

Mark Stern, Syfy's president of original programming, described the project as " 'a turn-of-the-century Fringe' in the vein of steampunk TV classic The Wild Wild West and Guy Ritchie's 2009 movie Sherlock Homes which put the steampunk genre back into the zeitgeist," Deadline.com noted.

Seems paranormal plays well on the small screen. From EW’s Inside TV :

NBC has picked up another pilot mixing fantasy with a crime drama: The network has greenlit Grimm, described as a “dark but fantastical cop drama about a world in which characters inspired by Grimm’s Fairy Tales exist.” (Gotta love mining expired copyrights in the public domain!).

The project is from Jim Kouf (Angel) and David Greenwalt (Buffy the Vampire Slayer), with executive producers Sean Hayes and Todd Milliner.

The order comes on top of Battlestar guru Ron Moore’s 17th Precinct, also at NBC, about cops working a town where people have magical powers.

I have a series of books you guys could look at.... just sayin'

Good and Bad News from the world of my pal Charlaine Harris:

From: LA TIMES AND Shelf Awareness

With DEAD RECKONING, the twelfth Sookie Stackhouse book, set for publication in May, author Charlaine Harris says she is almost finished with the series. "Truthfully, the next two books will probably be the last two books in the series. I still love Sookie, but I'm beginning to want to write something else, and Sookie;s kind of taken over my life. I was able to write other things for the first few years I was involved in Sookie, but then after the start of the television show she took over so much of my time because of my increased publicity obligations that it's been very hard to write other things, and I really need to do that."

Among other things happening in her busy licensing world, CBS has optioned her line of four Harper Connelly mysteries for development as a possible prime-time series. (In the meantime, IDW is developing Connelly as a graphic novel.) 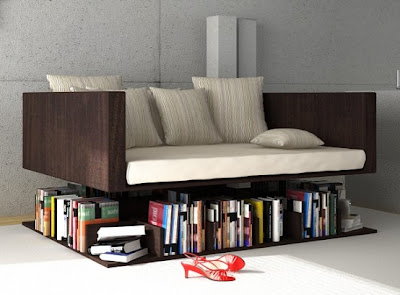 French-Moroccan designer Younes Duret has created the latest sofa design called Ransa. Ransa is a unique sofa equipped with bookshelf. It has a vault that can be made as a place to put books or magazines. The sofa can accommodate two people and for the book is able to accommodate up to as many as 70 books. The bookshelf on the base gives the sofa the impression of levitating above the books.
Doesn’t mention how much it costs or if the red pumps come with. I have a feeling this is one of those "if you have to ask you can't afford it" things....

And just because I love HP and think the movies have been pretty darn good, something from the Hollywood Reporter :

The British Academy of Film and Television Arts is giving the series an award for Outstanding British Contribution to Cinema.

LONDON – The British Academy of Film and Television Arts is to dish out an award for outstanding British contribution to cinema to the Harry Potter movie franchise.

Author J.K. Rowling and producer David Heyman will receive the honor on behalf of the long-running franchise during this year's Orange British Academy Film Awards on Feb. 13.

Awarded annually, the nod for outstanding British contribution to cinema was introduced in 1978, presented in honor of Michael Balcon.

Okay, off now to get some work done. The sun is shining, the snow is (almost) all melted, the temps are hovering around 60, even had windows open--what a difference a week makes, huh?

How goes it in your neck of the woods?

Comments:
Whoa! I hadn't heard anything about Atlas Shrugged. Thanks for the headsup, Jeanne!

Oooh, Houdini would have been so angry!

This is all great stuff. Lots of stuff to look forward to. Thanks for sharing!

you are all welcome!!

Awesome stuff! I think Anna would make a great movie or series!

As to Charlaine, it's disappointing the Sookie books will end, but to be honest, most longer series start to degrade anyway. I'd hate to see that happen to Sookie. And Harper will make a GREAT tv series.

Can hardly wait for Atlas Shrugged!

Hey Vickie-- thanks for stopping by! I agree about Harper, too. Last time I talked to Charlaine, she had planned to shut this series down, too. That might change now.

Buffy writers just broke my heart. I wanted to pitch that to NBC...hmmm...maybe they used some kind of vampire mind control to steal my one good idea... Sadly, I'd watch every episode.

The couch looks cool, but I know me and I'd be knockin' books off the shelf each time I got up or tried to get comfy. And the headrush leaning over trying to choose my next read....

I never thought of that, Vickie-- but you're right. I'd be kicking those books and probably bonking my head on those wooden arms everytime I stretched out to read!

I'd never keep the books neat enough and the tot would keep putting things there, like shoes, small pets, and juice boxes.

I think the Anna books would make a great TV series.