Wednesday, January 12, 2011
New Year, New Contest Hi all-- to start things out this year, Mario and I decided to have a contest The idea sprung from this:

Rowan Somerville is the author of two novels, The End of Sleep and this year's The Shape of Her, described by the Economist as "deceptively simple in plot and singularly musical in its voice, it is a study of the place where our past has become our present. A summer read to be kept – and visited in the dark days of winter..."

Last month, the novel followed authors including John Updike and Norman Mailer in winning the Literary Review's Bad Sex in Fiction award …with one killer sentence – "like a lepidopterist mounting a tough-skinned insect with a too blunt pin he screwed himself into her" – the novelist Rowan Somerville demolished all comers and secured this year's coveted…award.

Which brought up an interesting point. Who would you nominate for a bad sex in books award (notice I added “in books.” Don’t want any disgruntled husbands, wives, boyfriends, girlfriends, partners, etc etc coming after us.) Send in an example (we won’t name the book or author) and the winner (chosen by Mario and I) will win a prize...a prize sure to be appropriate to the topic. Anyway, here are the rules--well, RULE...find a really bad sex scene and submit it in comments. It can be raunchy or ridiculous or both. This is an adult blog. We'll run the contest for two weeks. So you have until Jan. 27. We're cross-posting this over at the League, too, and that group is REALLY twisted so you'll have to dig deep to beat them!!!


What do you think of these motion comics? Anyone bought one?

Baz Luhrmann's Great Gatsby 'could be filmed in 3D'

The Great Gatsby has been adapted for the big screen in the silent, monochrome and colour eras, as well as on the small screen, and even in a version for Korean audiences. Now F Scott Fitzgerald’s classic novel of the gilded jazz age could be set for a turn in stereoscopic vision after director Baz Lurhmann said he was considering filming his new adaptation in 3D...

The new Great Gatsby is set to star British actor Carey Mulligan as Daisy Buchanan, the manipulative and shallow New York socialite of Fitzgerald's famous tale of the roaring 20s. Leonardo DiCaprio is reportedly in line to play the title role, one made famous by Robert Redford in the 1974 version, with Tobey Maguire as Nick Carraway, Fitzgerald's narrator.

Just got the table of contents for an anthology coming out in June-- Chicks Kick Butt.

In Vino Veritas by Karen Chance 35

Nine- Tenths of the Law by Jenna Black 136

A Rose by Any Other Name Would Still Be Red 194

by Elizabeth A. Vaughan

Beyond the Pale by Nancy Holder 309

I'll post the cover as soon as I get it.

# # # #
I can't believe I missed the Cape last weekend (let me know what you thought) but I was up in Fairplay at a writer's retreat. It's also hard to believe we actually get any work done with a view like this out the sun room window, but we always manage. 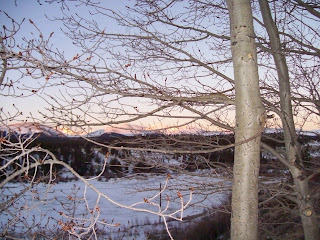 Writers in residence this weekend were Linda Hull, Susan Smith, Vicki Law, Carol Berg and a good representation from my own critique group, Tamra Monahan, Warren Hammond, Terry Wright and moi. Check out the Hand Hotel if you're looking for a quiet weekend away. It's great and in the little town of Fairplay is a candy and gift shop, the Chocolate Mousse , with the best homemade fudge and candies and fruit butters I've ever tasted.

Anyway, a few pics of the gathering of the clan as we prepare to start our day of "work". 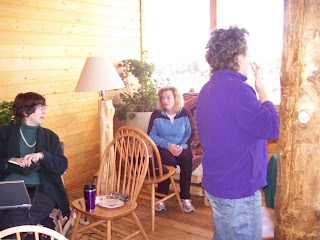 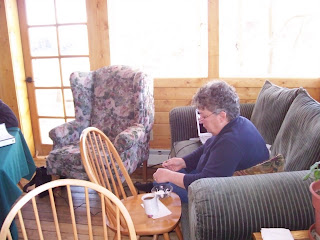 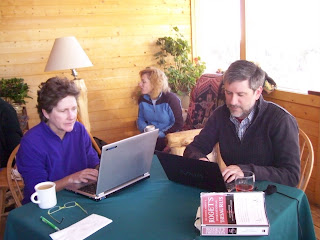 Comments:
Aha! I get it. You want scenes that change the old man and the sea to the little man in the boat. B^)

The Cape was good enough that I wish I'd thought of it. The hero has a good reason to wear the outfit. I'm not crazy about the actor playing him, but I'll watch it again.

Hi Dave--I'm going to try to catch it on line (if its available).

Hey Dave-- watched the Cape last night and I did like it, too. I think it switches to Monday next week--a better night for me.

Sounds like someone has too big of a budget, lol.

oh, boo. One of your panels at RT is at the same time as the Steampunk Social I'm involved in. Why are the panels I want to go to always at the same time as my own??? But since I have my social and a panel that day, I'll be around, possibly in some kind of costume involving a hat, bustle, and a raygun...

The tot is looking forward to seeing you at the booksigning the next day.

that's always the way it is, Suzi. I'm sure we'll see each other--and with a hat, bustle and raygun, you should be easy to spot!!

can't wait to see the tot!!

I missed the Cape as well but I'm playing catch up this weekend. As for the moving Buffy Comics I have only seen what's on youtube. I like the idea of them in theory but the voices (especially Willow's) just grate on my nerves. You know from the get go that the voices will not be SMG and the rest, but it sounds like they didn't even *try* to find voice actors with similar voices. I think I'll stick to the straight up comics on paper. As for the Green Hornet I'm looking forward to watching it at a later date. A few weeks ago Mythbusters busted "myths" from the Green Hornet movie and it was mildly amusing in a very geeky way.

Hey Leia-- I think it's the voices that turn me off, too. I like to identify with the original Buffyverse even if I know it's not.

Green Hornet is not garnering stellar reviews, that's for sure.

Here is where I have a confession to make. I'm a sucker for bad fantasy and sci-fi movies. When I still had cable I regularly subjected myself to Sci-Fi's Sat. afternoon films. You know - the people that recently brought us gyms like Sharktopus. Thus two things will make me watch a genre film - if it is good or if it fails spectacularly. If the Green Hornet is getting bad reviews then I hope they are horrible reviews b/c that would be kind of awesome. I'm pretty sure it also makes me a horrible person.

Not horrible, Leia--- I'm sure you have one or two redeeming qualities!!!
You follow this blog, for instance!
:-)

Why Jeanne, that is a redeeming quality isn't it? It's good to know that all is not lost. :)