We're in the festive doldrums (i.e., hangover) between Christmas and New Years. 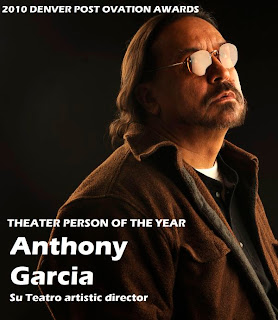 Before starting the Christmas recap, let's give a shout out to Anthony Garcia, the Artistic Director at El Centro Su Teatro. Anthony was chosen as the Theater Person of the Year by the Denver Post. He got extra points for those glasses.

We give another shout out, this one to Terry Wright, who's published The Beauty Queen, A Justin Graves Series thriller.
So how was your Christmas? While we're supposed to receive every gift with gratitude and warm hearts...still, we can get some crap. From KDVR.com, they offer this roundup of the Worst Christmas Gifts Ever.
Our faves:

A package of ground beef. 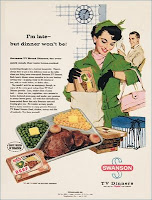 A frozen TV dinner.
Any Xmas horror gift stories to share?
See you next year.
Cheers!

Comments:
Hot pants - bright yellow and a Gaucho Hat. A black and white knit pants and sweater ensemble that made me look like the characters in that old Star Trek episode. A cloth purse with handle made of forks.

And back when we were vegan - seal skin slippers.

A Smith-Corona portable electric typewriter... when what I really wanted was a new amp for my electric guitar...

Turns out the typewriter did get a lot of use until it finally died 35 years later. But, DANG, I would have used the guitar amp every day!

The Twilight Trivia Game. I will be hopeless since I haven't read the books or seen the movies.

Hi Mario and Jeanne!
Merry Christmas, Happy Yule, Happy New Year!
Worst gift? Hmm, I would say the steel sled I got. Shaped like a triangle. It never, ever, ever slid on snow! Only ice! WTF!!?!
And yes, STEEL!! It weighed as much as a girder!!

Just got a book of vegetarian burger recipes from a family member. We haven't been vegetarians for a decade, and were both chowing down on ham at the gift exchange party. Luckily, it came with a gift receipt.

The worst Xmas gift ever was one I gave, rather than received. When I was a little girl, I wanted to give my dad "Old Spice" because I kept seeing it in commercials. Unfortunately, I didn't yet know the difference between cologne & deodorant...

Do you want to know what people do with those Worst Christmas Gifts? They give them to their friends born in January for their "birthday" presents, especially if they can get away with passing them off as the dreaded combination Christmas-birthday present. There's nothing like the joy of listening to your friend kvetch about some awful crap she/he just received for the Big Day, and then opening up the freshly gift wrapped present from said friend and voila! It's that same piece of crap he/she was just whinging about. I have much experience in this. There's a special place in hell for so called "regifters".

I got a saddle one year, with the promise of a horse, which never happened. This was not normal behavior for my parents, but Mom found the saddle really cheap and couldn't resist it. We were living on a farm at the time, but weren't there long enough for the horse thing to happen.

I got two VHS movies for Christmas.

I get a can of cheese every year from my dad's wife...