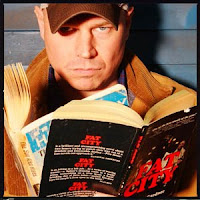 We be pimping the awesome Baltimore expatriate, Cort McMeel. (Their loss, Denver's gain!)  Don't let this pic fool you, McMeel is one of the nicest guys you'll ever meet. And he's plenty generous with beer money, which makes him a favorite here at the Biting-Edge around quitting time.

McMeel was the big man behind the acclaimed Murdaland mystery anthology. Short fiction noir at its darkest and most compelling. Now he's finally made it into the big league with his financial thriller, Short. Mark your calendars, as one of their Writer's Buzz presentations, Lighthouse Writers will host McMeel's book launch party, 7pm, Saturday, December 11 at 910 Arts, 910 Santa Fe Boulevard, Denver. Miss this and you might wake up on a pier wearing cement overshoes. Just saying. 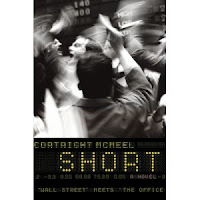 There's no doubt this publishing business is CRAZY! Try and figure it out, I dare ya!
For example, the money.  Hank Steinberg sold the screen rights, in the upper six figures, for a book that hasn't even been written. Likewise, Ernie Cline sold the screen rights for an unpublished debut novel, Ready Player One. And to further antagonize your green-eyed monster, 21 y.o. Paige Harbison sold her debut novel to Galgos Entertainment.
You won't have to read much between the lines to realize, that if you're going to schmooze, schmooze with people with Hollywood juice. Steinberg created the CBS show, Without a Trace. Cline already has screenwriter credentials. Harbison's mom has a movie of her own in the works with Galgos Entertainment, starring Halle Berry. Get the scoop here.
And we turn to the literary world's favorite punching bag, James I'm no sleazeoid Frey. Now he might be a man of questionable writing talent, but he is an expert of schmoozing his way into 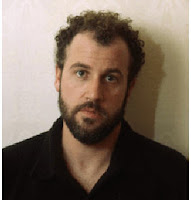 big piles of money. He crashed and burned after the Million Little Pieces-Oprah fiasco. Then arose phoenix-like with the novel (and a huge advance) Bright Shiny Morning, which tanked. Recently, he's garnered even more notoriety with his publishing company Full Fathom Five and its infamous writing contract. Basically, you get paid $250 upfront to write a book, maybe another $250 upon completion, and maybe 40% of revenues generated by the work. But the real bacon for Frey is this clause: a $50,000 penalty if you the writer publicly admitted that you wrote for Full Fathom Five without permission. Why wouldn't Frey want you to tell the world about this deal? Besides the larcenous contract, what makes this even worse is that Frey recruited from students during his teaching gig at Columbia. He's teaching writing? Rather than guide his students around the perilous shoals of the writing biz, he takes full advantage of their desperate desire to get published and screws them with this offer. For details on the contract, read about it in the NY Mag.
But it's not always about the money. Sometimes, you get the most marvelous ego stroke like what happened to Leaguer pal, Jackie Morse Kessler, when Neil Gaiman had this photo taken with her book, Hunger. 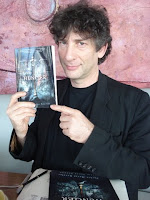 Comments:
thanks for starting my day on such a low note, Mario...My reaction to Frey isn't so much can't believe he's doing this (because it's just what he would do) but how the f**k is he getting people to go along with him? You probably hit it when you said he's taking advantage of a desperate desire to get pub'd.

It makes my stomach turn.

I think Jeanne's right: Frey's taking advantage of a desperate desire to get pub'd. :(
It's an interesting situation.
John Scalzi, the SFWA President, has been blogging about it this week over at
whatever.scalzi.com.