Sunday, October 24, 2010
Mile Hi Con behind us, up ahead...Halloween with wine!
Mario here,
Another Mile Hi Con bites the dust.  You mix writers, geeks, booze, and costumes, you're bound to end up with all sorts of nuttiness.  This con didn't disappoint. 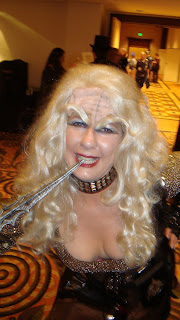 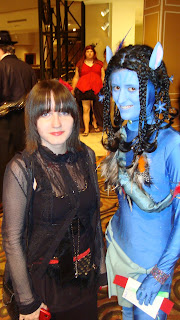 Ilana and Janene continued to strut their stuff after the costume contest.---> 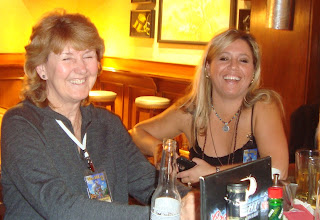 As expected, Jeanne and Betsy Dornbusch got a jump start on the mayhem by fueling up at the bar and plotting against you-know-who. 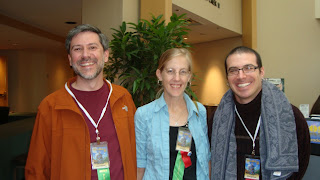 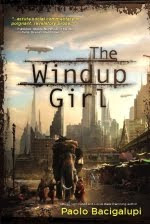 We had much to celebrate with the recent success of Bacigalupi, winner of a Hugo and a Nebula for The Windup Girl, and as a Finalist for a National Book Award for Ship Breaker.
Jeanne represented the Biting-Edge on the Vampires, Werewolves, Mermaids: Next in Urban Fantasy panel with Author Guest of Honor Rachel Caine (L), and Stephen Graham Jones (R). 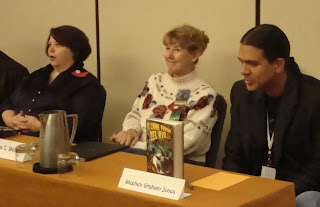 Every once in a rare while I surprise myself in a good way.  It happened at this con when I met the Artist Guest of Honor Donato Giancola and guessed his major artistic influence.  Giancola provided the breathtaking cover illustration for the conference program with a reproduction of his oil painting Mechanic.   I complimented Giancola about his impressive ability to render such a convincing red metallic.  He said he used a red Christmas ball ornament as a model. 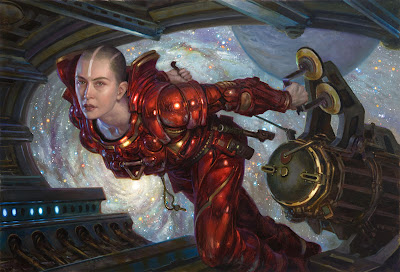 I studied the painting and commented to Gianola that his color palette and style reminded me of the great British painter John Waterhouse (1849-1917).
Giancola brightened at my 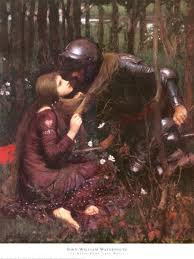 observation and replied with an enthusiastic affirmative.
(Waterhouse La Belle Dame Sans Merci --->)
Afterwards we had a wonderful conversation about Giancola's career, his techniques, and our appreciation for Waterhouse and NC Wyeth.  Made me want to get back to the easel ASAP, and I will.
One topic among us writers is that in our stories, for all our struggles against formula, we can still unwittingly wallow in the tropes of our genre.  If you want to churn through the banal and overdone concepts of the small screen, check out the website TVtropes.org

I'm the guest blogger on Readaholic's Scarefest with my essay, Why I Love Halloween. Thanks for the invitation, Bridget.
Since this is the season of witches and things that can make you go e-yeew! in a big way, we must share these videos.
First: from author Deborah Harkness, whose debut novel A Discovery of Witches, is due out February 8 from Viking.

Harkness is a vintner with an award-winning blog, GoodWineUnder $20.  But what about us poor writers? Anything for under five bucks?
I was asked by the AV Club of The Onion to share my favorite horror movie. No contest. John Carpenter's The Thing, and especially for this scene:

Enough with the gross outs.  Fortunately, we have Elvira providing some needed and welcome relief (and more cleavage):

Comments:
Somebody probably poorer on the whole than writers - musicians. When I got to L.A. in the early-mid 70s there was a mid-California bulk wine called Red Mountain. A little over a buck, or 99 cents on sale, for a gallon jug. The labels were reproduced on a mimeograph and showed a guy with a jug in his hand and Xs for eyes. With the slogan... Red Mountain Wine - guaranteed not to blind.

It's not available any more (probably a good thing) and the Red Mountain Wineries in the Pacific Northwest would probably prefer that the memories would disappear forever.

So much fun this weekend. Great seeing you.

And Donato IS a nice guy and a wonderful artist. It took major willpower not to bid on his stuff!

Elvira is back. Worth a toast with red wine.