Wednesday, September 22, 2010
Home at last!! Spent such a nice weekend in San Diego—with my sis, Connie, my cousin, Ed, my good friends, Ron and Louis, and all the wonderful people who showed up at Mysterious Galaxy for the Saturday signing. There was standing room only at the bookstore. It was such a rush. I can’t thank everyone enough for the support you’ve shown me – Chosen has had a terrific launch.

Now it's back to the real world and work... 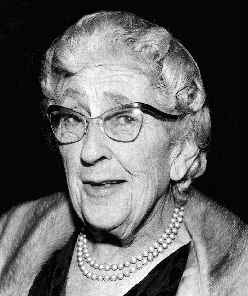 It's the 120th anniversary of Agatha Christie's birth.

HarperCollins has reached an agreement with the estate of Agatha Christie to become the author's exclusive worldwide English language publisher, the Bookseller.com reported, noting that "Penguin and St. Martin's Press had been publishing Christie in the U.S. Collins has published Agatha Christie since The Murder of Roger Ackroyd was first published in 1926."

Victoria Barnsley, CEO and publisher, HarperCollins U.K. and International, said, "Agatha Christie has now become a global brand, embodying a certain quintessentially British style. In this the 120th year since her birth, in a rapidly changing world, we are keen to publish her work in all formats, everywhere in the globe, to consolidate her position as the world's most popular author."

But don't be too long about it—the deadline is Thursday, December 1, 2010.

For the amateur detectives among us a true story to offer inspiration! My relentless pursuit of the guy who robbed me— Check it out here .

By now we all know J A Konrath's story of choosing to epub his books himself from now on. Well, read this and we writers will all be asking ourselves if we're crazy not to follow his example.

From Publishers Lunch: JA Konrath updates his periodic reports on his ebook sales, saying that he has now sold over 100,000 units across all of his titles. Seventy-five percent of his sales are from the Kindle store--and 6 books account for 75 percent of those sales. As in previous reports, he credits low prices ($2.99) with driving sales volume on his ebooks. "When I began this ebook odyssey, back in April 2009, I had no idea the market would get so big so fast, or that I'd make so much money."

# # # #
So what's your take on the new television season so far? Any hits? Any misses? I haven't had much chance to sample any of the new shows so I'd like your opinions.

One sad note, Urban Fantasy writer Jennifer Rardin past away unexpectedly this week. She was the author of the popular Jaz Parks series. She was only forty-five.

The only shows I've watched this week have been House and Castle. The hubby didn't get that Castle was a writer *forever*. It was funny.

I don't get a lot of time to watch grown up TV, lol.

Say what? Jennifer Rardin? That is very sad indeed! I just discovered the Jaz Parks books this past summer and found that the author had a very interesting manner of writing. She will certainly be missed and I send out my prayers to her friends and family.

As for this fall season, I still havent caught NCIS yet, but Castle and Chuck were very good. Tonight brings us the return of Big Bany Theory, Bones, and Community. I am psyched about everyone of those and hope for great things.

Jennifer's family and friends are in my prayers. I love her books.

I will miss the summer shows of Eureka and Haven and Warehouse 13. I do hope they get renewed for next season.
Getting ready to watch Hawaii Five 0 in a bit. Thank goodness DH finally got DVR for me. I want to see Detroit 1-8-7 (I think).
Watched Castle the other night (AWESOME). Bones new season starts tonight as does Big Bang Theory. Love my Sheldon.
Not sure what other shows will do it for me this season.
Now, like a big ol' goob, I am crying at the end of this season ender for Warehouse 13....

My sister is sending me a Kindle, she has two thanks to a friend who gave her is older one and her DH who gave her a new one for her birthday.
And J A Konrath sent an email today asking if I'd like to do an early review of DRACULAS - A Novel of Terror written by him, F Paul Wilson, Jeff Strand and Blake Crouch...woof! I can get it in pdf format, thankfully, since I don't have an e-reader yet.

Cranium's up....James Marsters is on the pilot episode of Hawaii-Five-0.

Oh no-- I missed Hawaii-Five-O!! What did James play? Will it be a recurring role? I'll have to try to watch it on the computer.

But James plays such a fab villain. And it's James!

He just didn't have enough air time. He did die fabulously though, didn't he? :-)

Please contact me at paltner@verizon.net. Having a problem with email