Sunday, August 08, 2010
Words for the dog days of summer
Mario here:
You'd think that with all the free time we writers have--breakfast in bed, three martini lunches, afternoons at the spa, working on our tans, evening cocktails, the occasional public brawl--we'd have plenty of time to read.  Especially during the summer.  But no.  We have to carve our spare minutes out of the clock.  Each of us has a TBR stack tall enough to kill if it toppled over at the wrong moment.
This last month I played a little hooky from my deadlines to attack that pile.  I finished two classics and a new book.  I was familiar with the first two stories through their movie versions though in both cases, the books were much richer.
Beau Geste

Like most readers, I've seen at least a couple of the many film adaptations of this story.  For some reason, people think Beau Geste is the fort (Actually Fort Zinderneuf), when it's the name of the protagonist, Michael Geste, an orphaned English boy who grows up to serve in the French Foreign Legion.  He's enlisted because of reasons to save his aunt's honor as their family's finances deteriorate.  Unlike the movies, the book doesn't romanticize service in the legion and author Percival Christopher Wren details a legionnaires' miserable existence in the African desert--constant headaches, thirst, madness caused by the heat, and the terror of ambushes and seiges. The story is intricate and meaty with an intriguing, satisfying ending though the language is somewhat dated. For example, instead of "said" Wren often uses "ejaculated." 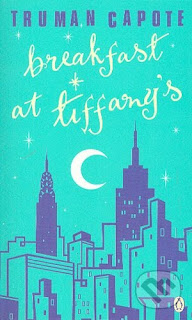 Breakfast at Tiffany's
I decided to read the book and enjoyed it as much as I have the movie with Audrey Hepburn and George Peppard.  On film, much of the story's contemporary texture has been smoothed over, eliminating references to marijuana, cocaine, pornography, homosexuality, and interracial sex.  Truman Capote's elegant prose is deceptively breezy as shown in this example when he introduces Holly:
"She was still on the stairs, now she reached the landing, and the ragbag colors of her boy's hair, tawny streaks, strands of albino-blond and yellow, caught the hall light.  It was a warm evening, nearly summer, and she wore a slim cool black dress, black sandals, and a pearl choker.  For all her chic thinness, she had an almost breakfast-cereal air of health, a soap and lemon cleanness, a rough pink darkening in the cheeks."
The book is sixty years old and yet Holly Golightly can still out-sass anyone else you'll find in literature.  Here Holly gives counsel to Mag Wildwood:
"Well. Does he bite?"
Mag dropped a stitch. "Bite?"
"You. In bed."
"Why, no. Should he?" Then she added, censoriously: "But he does laugh."
"Good. That's the right spirit. I like a man who sees the humor; most of them, they're all pant and puff."
Mag withdrew her complaint; she accepted the comment as flattery reflecting on herself. "Yes. I suppose."
"Okay. He doesn't bite. He laughs. What else?"
Mag counted up her dropped stitch and began again, knit, purl, purl.
"I said--"
"I heard you. And it isn't that I don't want to tell you. But it's difficult to remember. I don't d-d-dwell on these things. The way you seem to. They go out of my head like a dream. I'm sure that's the normal attitude."
"It may be normal, darling; but I'd rather be natural." Holly paused in the process of reddening the rest of the cat's whiskers. "Listen. If you can't remember, try leaving the lights on."
"Please understand me, Holly. I'm a very-very-very conventional person."
"Oh balls. What's wrong with a decent look at the guy you like? Men are beautiful, a lot of them are, José is, and if you don't even want to look at him, well, I'd say he's getting a pretty cold plate of macaroni." 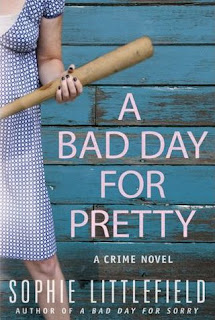 A Bad Day for Pretty
Though not yet on the big screen, Sophie Littlefield's book holds its own with the two previous titles. A Bad Day for Pretty is the sequel for Littlefield's award-winning debut, A Bad Day For Sorry, which introduced us to Stella Hardesty, a middled-aged widow who goes on a vigilante mission to punish men for abusing women.
The unique premise is made even more engaging by Littlefield's narrative voice that braids humor, empathy, and pathos in a demolition-derby of action and violence.  Here's a sample that illustrates her animated writing style when describing the havoc wrecked by a tornado:
"The other set of bleachers hadn't disappeared, but it looked as though the twister had yanked it out of the ground, crunched it up in its twirling jaws, decided it didn't care for the taste of aluminum, and rudely spit it back out."
Littlefield gives substantial dimension to her characters.  The protagonist Hardesty is more than a woman seeking revenge but a complex individual who buttresses her friends while she yearns for romance with Sheriff "Goat" Jones.
And this just in from Publishers Lunch:
"Sophie Littlefield's next two untitled paranormal young adult novels, following her zombie novels BANISHED and UNFORSAKEN, to Stephanie Elliott at Delacorte, in a two-book deal, by Barbara Poelle at Irene Goodman Agency (NA).  Foreign: Baror International"
Go Sophie.
Genius, the movie 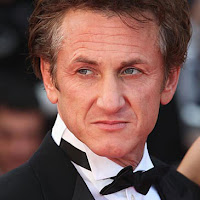 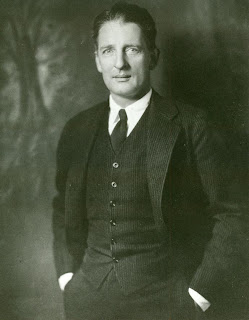 We're soon going to see Sean Penn's interpretation of that giant of American literature, Maxwell Perkins, editor to icons such as Ernest Hemingway, F. Scott Fitzgerald, and Thomas Wolfe. It'll be interesting to see the drama played out in a story that doesn't involve monsters, gun fights, and CGI.
This last weekend I spoke at the Rocky Mountain Book Fair on the panel: From Stoker to Stephanie: Evolution of the Literary Vampire.  I raffled an ARC of X-Rated Bloodsuckers, won by Sarah Blaylock, here flanked by fellow urban fantasy authors and panelists, Stephen Graham Jones (professor of creative writing at UC Boulder) and Lynda Hilburn. 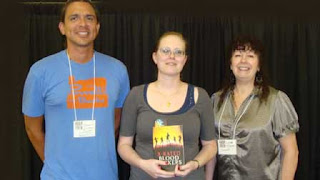 A step not backward but to the side: 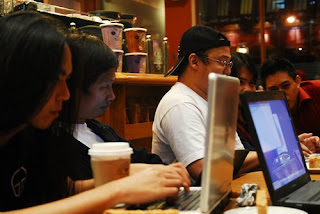 It's become a cliché to assume that you'll find writers in coffee shops pecking at their laptops and surfing the Internet.  Now a few coffee shops are turning off the wifi and discouraging the laptop.  Why? The L.A. Times gives the scoop.  Reason one, to keep folks from camping out for hours at a time while nursing a single cup of joe and discouraging better-paying patrons.  Reason two, people on laptops are focused inward while a coffee shop used to be known as a place for conversation and entertainment.  Switching off the wifi--good idea or does it matter?

Comments:
I'm not sure I knew BREAKFAST AT TIFFANY'S was such a cool book. It's on the WWBL. I have A BAD DAY FOR SORRY on the nightstand to read next after EMBERS - Laura Bickle.
I've never enjoyed having laptop time at the foo-foo coffee shop, but I know people might be a little miffed about it. I bring a book and take up seating space for an hour or more with my bigass foo-foo coffee or chai. Hope they don't make me keep my book in my purse and make me actually talk to someone.....

Usually I go by myself to a coffee shop to work, sans laptop. I enjoy the vibe of conversation except for guys yakking at max volume on their cell phones. Sometimes I happen to meet a friend and we forget about work to gab.

The books sound great. I am not a coffee person and so I don't go to the coffee shop unless I am meeting a coffee person.
Nancy
N. R. Williams, fantasy author

There are already too few places that serve food that will let you just sit and work. When I haev serious work that needs doing I end up with my laptop at Burger King inbetween the lunch and dinner meals. Unlimited coke refills and plenty of open seats (so I don't get kicked out). The onyl problem with that, is that coffee shops have a much better working atmosphere. If you are going to discourage laptops, then you might as well discourage the couples, friends, and dates that go to coffee shops to sit for hours and catch up.