Thursday, August 12, 2010
Reflections Writing is a crazy business. It's fraught with anxiety and self-doubt and stomach-turning worry about how your new book will be accepted. Sales-figures turn your hair gray. Reviews (or lack of them) turn you into a raving lunatic. Your family and friends learn to tiptoe around you in the weeks before a release.

Good friend Pat Andreatta hooked me up with aspiring writer Rhonda Skallan. The three of us met for drinks and conversation at YaYa's-- a great place in Greenwood Village. For three and a half hours, we talked about writing. Rhonda's enthusiasm and determination to follow a dream reminded me how I felt when I was starting out. She reminded me of how wonderful it was to have achieved (even modestly) what I set out to do when I took those first steps on the path to becoming a published author. She reminded me of the passion.

I want to thank Pat and Rhonda for something I'd almost forgotten in the furious flurry of activity before a new release--I love what I'm doing. If Chosen turns out to be the last book I ever write, I DID it. My books are out there in the world. I'm very lucky. 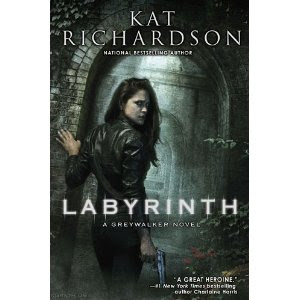 And that brings me to another writer pal whose book was just released. Kat Richardson's Labyrinth, Book Five in the acclaimed Greywalker series, is available now on Amazon or at your favorite book store. Check it out.

On to other stuff.

Main book news this week was Dorchester's decision to go all digital. Here;s a good summary from Publisher's Weekly:

Dorchester Publishing has switched to subsistence mode, though they have tried to sprinkle some digital fairy dust over the move. The mass market publisher has struggled for some time, now. At the beginning of the year they sold both frontlist and backlist titles from many of their top authors to Avon--an imprint of their distributor, HarperCollins. Earlier this summer, the Romance Writers of America reportedly cancelled Dorchester's participation in their annual conference because the company was "past due in fulfilling contractual obligations to some of their authors." And company president John Prebich confirmed to the media last Friday that their retail sales fell 25 percent in 2009 (before they sold off top properties.)

So the company is giving up on functioning as a traditional print publisher. In a last-ditch effort to subsist, they will now issue all titles to the trade as ebooks only. Dorchester has laid off their sales force of seven people, and will work with Ingram Publisher Services to distribute POD versions of some titles. Romance titles have been successful for years in ebook form, so the company may find some strength there. But for now this a story about a genre mass-market publisher retreating rather than a bold digital initiative.

Hard Case Crime owner Charles Ardai tells the WSJ he may move his imprint's distribution as a result, which makes sense. "It's been a good run, but if they aren't publishing mass market paperbacks, we'll have to decide what to do."

Want a portrait of your favorite books? 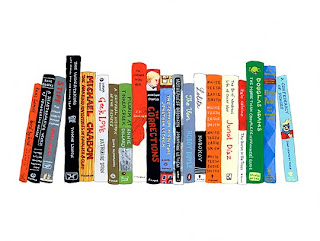 Jane Mount will do it for you. Order here .

Or how about new wallpaper? 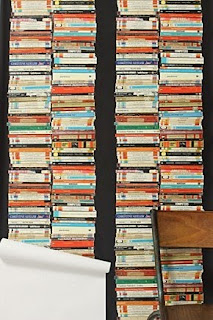 Contest for aspiring YA writers:
Delacorte Books announces its 29th Annual Delacorte Press Contest for a First Young Adult Novel. First prize is a book contract with $1,500 cash and $7,500 advance against royalties. You’re eligible to enter if you haven’t previously published a book-length work or young adult fiction. Enter the complete manuscript of a contemporary novel suitable for readers aged 12 to 18. Manuscripts should be between 100 and 224 typewritten pages. Entries must be postmarked after October 1 but before December 31, 2010. Find all the rules here .

Ever heard of motion comics? I hadn't. Here's a definition I found:

Motion comics look like traditional comic books, but incorporate voice acting and a musical score. And only certain elements of the “page” are animated: a zoom-in, a pan, someone raising their arms.

And an example from Angel: After the Fall:

New trend? What do you think? Thumbs up or thumbs down?

Comments:
Hmmm ... I can see why they would go digital in an effort to keep themselves afloat, but that seem a little counterproductive to me. Granted I'll admit upfront that I don't know much about the whole book publishing process, but it seems unlikely that they will attract any heavyweight authors (or retain any authors gaining in popularity) with a digital only policy. Digital books are all well and good (Ok, so I hate them, but I know that they are the "thing" now.), but how many authors have you discovered by simply browsing the bookshelves, looking at cover art, reading the back, and making an impulse buy. I've made a few impulse book buys on Amazon due to random browsing, but no where near as many buys have been made that way. Come to think of it, almost every author I bought impulsively (tip of my hat to Jeanne) has been someone I discovered at a physical bookstore.

Also something to consider is whether "digital publishing" is ACTUALLY publishing. What is there to distinguish those books from the websites that allow writers to self-publish? If a company doesn't have the money to invest in paper volumes, do they have the money to properly market their authors? If not, then I see no way that their publications will be any different from self published authors whose work sits out there hoping that people will find it and read it.

I don't know. I see what they are trying to do, but in my mind e-books have not become popular enough to make e-publishing feel 100% legit. I doubt that authors who only e-publish will receive the respect that their work deserves, and will be caught in some sort of publishing/marketing limbo.

Thanks for the great comments. You raised a lot of interesting questions.

Leia said: I doubt that authors who only e-publish will receive the respect that their work deserves, and will be caught in some sort of publishing/marketing limbo.

And that sums it up in my mind, too, even though there are authors like J A Konrath who says he will now publish the majority of his own stuff by himself and on line.

It will be interesting to see how it plays out, but I have some very serious doubts about it. I suppose that being picked up by any publishing company means that your work has to meet certain standards to even be considered worth investing in. Yet, when major publishing costs (i.e. the actual printing) are taken out of the mix, then how high must the company's standards be? The temptation for quantity of quality would be very high. Perhaps this would a good route for individuals trying to get on their feet and simply get their work out there with some kind of legitimacy attached to it, but I don't see anyone worth their salt sticking around for very long before moving on to someone that actually prints the books they publish.

I'm still on the fence about e-books. And how are they publicized unless they are already in handheld version...

CHOSEN is pre-ordered x 2 and the person I bought CHOSEN for bought LABYRINTH for me. She went to see Kat in Oregon at a Powells and got them signed for us. Now to get CHOSEN signed for us when we get them....where you gonna be at?

I keep bugging the poor people at the bookstore about when Chosen is going to come in. I don't know why, but part of me is hoping that the release date got pushed up and I'll get it sooner :p

Thanks for preordering Chosen, Vickie, and picking up Labyrinth. Leia, you keep bugging that bookstore! :-)

Hi Jeanne! Hugs. Will you be signing in Glendale again? The tot will give you all the inspiration and enthusiam you need. :)

I'm not sure, Suzanne. I haven't heard from Christine Bell. I hope to.

It makes me kind of sad to miss all the book signing fun b/c I'm halfway across the country. Come to think of it, it's funny how many authors I read that are from your neck of the woods. Here's to the events going well and you getting a good turn out!