Thursday, July 29, 2010
If it's Thursday, it must be Jeanne... Before we get to the blog part of the blog, a few paid political announcements. New books just released by pals Kelly Meding: 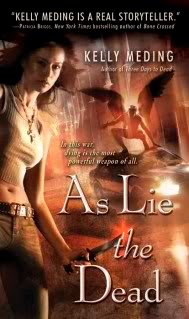 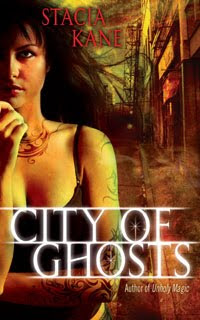 and Molly Harper (something chick-litish from her): 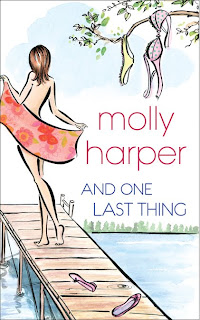 All worthy of your consideration and $ so check them out.

Jeff Shelby writing under a pseudonym's STAY AT HOME DEAD, in the first in the stay-at-home dad Deuce Winters series, Deuce must clear his name with the help of a fedora-wearing midget P.I. after Deuce's former high school football rival turns up dead in his minivan, to Peter Senftleben at Kensington, in a three-book deal, by Stacia Decker at the Donald Maass Literary Agency (World).

As for me, I believe there is still time to get in on the Borders Blog give-away for Chosen here .

Did you hear about this?

From the New York Times July 26

The novelist Janet Evanovich has taken her scrappy bounty-hunter heroine Stephanie Plum to Random House leaving her longtime publisher, St. Martin’s Press, after more than two months of negotiations fell through. “We’ve had a good relationship, and I truly am sorry that we’re unable to come to terms,” said Matthew Shear, publisher at St. Martin’s Press. “But it’s a negotiation like anything else and it didn’t work. And I hope it works well for her elsewhere.” Mr. Shear declined to comment on a report on Deadline.com that Ms. Evanovich had sought $50 million as an advance for her next four novels. Random House said on Monday that Ms. Evanovich had jumped to its Ballantine Bantam Dell imprint; it acquired the world rights to four new novels, including two Stephanie Plum tales and two in Ms. Evanovich’s “Unmentionable” series. Random House declined to disclose the financial terms of the contract. Ms. Evanovich has been with St. Martin’s Press since the publication of “Four to Score,” the fourth novel in her Stephanie Plum series, in 1998. Her last 11 novels have made their debut at No. 1 on The New York Times’s best-seller list, and her 33 novels have combined sales of more than 75 million copies worldwide, according to Random House.

75 million copies is a lot of books, but is any author worth $50 mil? What do you think?

As usual, my picture taking at ComicCon was lame at best. But I did snap a few costumes worthy of mention.

This woman was about seven feet tall. I assume she had elevator shoes under all those feathers and I didn't get a good perspective because there were about a gazillion people milling around, but it was something. 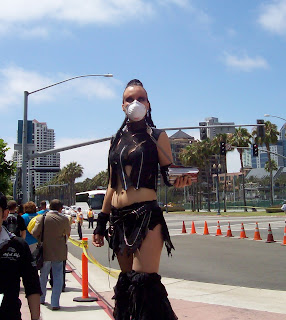 They had both one of the machines from Avatar and the Iron Man suit at booths. Pretty impressive. 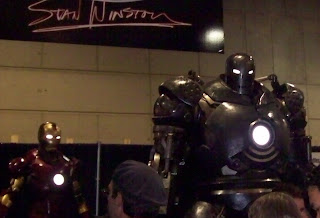 And I took this kid because he had the most gorgeous face I've seen in a long time--okay, I'm old, but I'm not dead!! 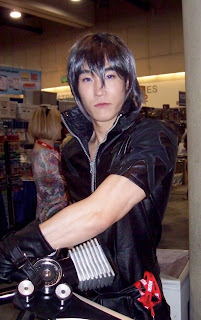 This is the only blurry photo I have of the panel, Fang Girls and Boys:

Left to right: Rachel Caine, Chris Farnsworth, Chris Marie Green, Charlaine Harris, Richelle Mead, Me. Heather Brewer was to the far left and didn't make the shot. Moderator was Brian Truitt who did a terrific job. It was fun. Especially being in such stellar company,

I think that might be it for the day. Off to finish an article for an anthology called Whedonistas. Right up my alley.  ¶ posted by Jeanne Stein @ 4:47 AM

Comments:
$50 million is alot for any author that doesn't write about Potter, but she has incredible numbers.

Check out my snark-filled article on the Top Ten Hottest Male Vamps of All Time. Vote and leave nasty comments.

You know, my first knee jerk reaction is to say "no body is worth that much for four books," but then I have to take a step back. A person, no matter what their occupation, is worth as much as the market/their audience/their employers deem them to be. While I've never been much of an Evanovich fan, she is a wildly popular author. I'm fairly certain that her books will sell with or without publicity, and publishers knows that no matter what she writes people will buy it. So you know what? If she asks 50 million (no matter how high that might seem) and a publisher is willing to pay the 50 mil, then I'd say she's worth it. The publisher would not pay her that if they didn't feel that it was a worth investment on their part.

Kinda why I don't read her books any longer. She's a weee bit full of herself and knows now that she can write crap or have someone else write it for her and she slaps her name on it like Patterson does and people will still buy it because of her name. I used to really like her and Stephanie Plum, but got tired. I'd rather read an author who writes for the love of it. I know money is sweeeet! but to request an amount that exorbitant is insanity or pewpheadedness.

San Diego looks like it was a hootenanny. I am hoping one day to make a Con like that. I love San Diego anyway.

Congrats to all the authors' new books coming out and being bought.

Hey Brad-- live your site. I voted for Spike of course and was shocked and repulsed to see he is being beaten by Count Chocula...I mean really.

Leah-- you make very good points. Supply and demand is the name of the game. And of course if I were in the position to ask for $50 mil, would I? You bet your fangs I would. However, since St. Martin didn't bite, I hope we hear how she fares with other publishers.

Vickie you would LOVE ComicCon. So would Lady K. She could wear a different costume everyday!

I love Spike too, especially his description of the blooomin' onion. But Chocula is just so darn stable.

And let me know if you ever want to write something for bradmouth. We always need funny content.

Love the pics. i'll have to make it to comicon one day. I'm at RWA in orlando and having a blast. The panel I'm on is tomorrow...we'll see how it goes, lol

Me? Funny? You've mistaken me for Mario (who is funny, at least in his own head).

thanks for the invite-- I'll keep in touch. And thanks for stopping by.

You need a good sense of humor to be around Jeanne. Trust me.

I can't say I've read very many vampire novels, but I've read both Jeanne's and Mario's and I must say, two thumbs up. As for the money, it is like 'Field of Dreams' in reverse, if you give it, I'll take it and send you my books.

Hey Nancy-- Mario and I thank you for the thumbs up!!

The panel went amazingly well. Thanks for all the tips and well wishes.
Here are some pic
http://tinyurl.com/27wacet

Suzanne, Just hopped on over and left a comment.

You looked beautiful. Can I post one of those pics and a link to your blog on Thursday?

Please. :) I'm so glad you liked them. I think us Lolitas may be at RT. hmmm....what happens when you get the lolitas and the leaguers together?

My vote would be that it would involve cute shoes and ray guns and end with Mario and Mark Henry in corsets...

Just wanted to rebump here and mention my top 5 hottest male vamps is up on my site.

P.S. We need funny contributing writers. If anyone's interested, shoot me at bradmouth@gmail.com