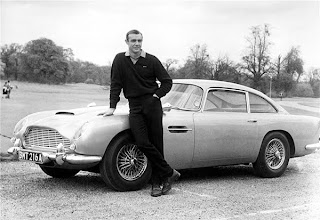 James Bond’s iconic car Aston Martin DB5 is for sale, first time in history. The car, driven by driven by Sean Connery in “Goldfinger” is expected to fetch more than $5 million. The car, a1964 Aston Martin, is fitted with twin machine guns and it will be put under the hammer at a London auction as 007 fans and collectors would battle with each other to acquire the James Bond’s favorite car…

Coincidentally, this from Shelf Awareness:

Ian Fleming Publications Ltd. has chosen the bestselling thriller author Jeffrey Deaver to write a new James Bond book. Currently operating undercover with the title Project X, the novel is scheduled to be released May 28, 2011, in honor of Ian Fleming's birthday. It will be published in the U.S. by Simon & Schuster and in the U.K. by Hodder & Stoughton.

"I can't describe the thrill I felt when first approached by Ian Fleming's estate to ask if I'd be interested in writing the next book in the James Bond series," said Deaver, who won the Crime Writers' Association's Ian Fleming Steel Dagger Award in 2004 for Garden of Beasts. "I began reading them when I was about nine or ten, ignorant of the Cold War politics they explored but enthralled by their sense of adventure and derring-do. I continued to read and reread them, which was fortunate because as a teen and adult I found, of course, nuances, that were invisible to a child."

Corinne Turner, managing director of Ian Fleming Publications Ltd., said, "I'd always enjoyed Jeffery Deaver's thrillers, but I particularly liked Garden of Beasts. It demonstrated that he was not only a master of the contemporary American thriller but could also write compelling novels of period suspense within a European setting. I didn't know anything about the author himself and expected a fairly low key response from him when he received our award. I was surprised and delighted when he spoke very fondly of Ian and about the influence that the Bond books had had on his own writing career. It was at that point that I first thought that James Bond could have an interesting adventure in Jeffery Deaver's hands."

I have every JB book written and am sure I'll add this one. Any thoughts from other Bond fans out there? From Deaver fans? 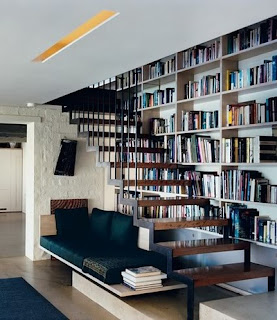 A collection of all the best bookshelf photos for people that *heart* bookshelves. Pretty nifty.

# # # #
And some not-so-happy news for you Hobbit fans. From Shelf Awareness:

Guillermo Del Toro has resigned as director of the film version of J.R.R. Tolkien's The Hobbit, citing "delays in the project and financial questions surrounding MGM," according to the New York Daily News.

"In light of ongoing delays in the setting of a start date for filming The Hobbit, I am faced with the hardest decision of my life," Del Toro wrote on theonering.net . "After nearly two years of living, breathing and designing a world as rich as Tolkien's Middle Earth, I must, with great regret, take leave from helming these wonderful pictures."  Producer Peter Jackson said he will not step in as director, and that despite the change, The Hobbit is still set to be released as two movies in 2012 and 2013.

So, how did you spend your long weekend? Did you have a long weekend? I felt pretty good about mine--got my novella off to the editor two days early...did a lot of yard work that needed doing...ate barbecue and drank beer...remembered my dad and the vets who made it possible for me to do all that fun stuff. I got my poppy, did you?
Pretty good weekend indeed.
¶ posted by Jeanne Stein @ 4:07 PM

Comments:
*sigh* If the Hobbit has too many more directorial changes it will end up as the X3 of the Lord of the Rings series. Did you see X3? I'm still ticked about how it ended up ... way to many cooks in the kitchen with none sticking around long enough to see the project through.

Memorial Day weekend I did my Spring Cleaning. Now it looks like I just moved into my house. I'm still not quite sure what to do with myself. My house hasn't been this clean in like three years.

Want to come over and clean mine now? The yard looks great but the house...

I took the tot to sea world for the holiday weekend (did you get the pic?)

I got a job! it only took 8 months, lol. I start on Monday. But it's a suit and makeup job, unlike my last one. Do my suits still fit? LOL

Jeanne I'm so worn out from cleaning my little hovel, there would have to be some pretty compelling incentive to make me clean anything bigger. :p I will say that I suddenly have an overwhelming amount of respect for people that do that kind of work day in and out. As of now I want to say that my house will never fall into disarray again ... but I think we all know that I'd be lying.

Suzi, congrats on the job!

Jeanne I'm so worn out from cleaning my little hovel, there would have to be some pretty compelling incentive to make me clean anything bigger. :p I will say that I suddenly have an overwhelming amount of respect for people that do that kind of work day in and out. As of now I want to say that my house will never fall into disarray again ... but I think we all know that I'd be lying.

Suzi, congrats on the job!

Jeanne, that came from my own sick and twisted imagination, lol.