Wednesday, June 16, 2010
Crested Butte here I come... I am looking forward to this weekend. It's a nice getaway for my husband and me even if it is technically a working weekend. Crested Butte is in a very beautiful part of Colorado.

"The trouble is, you have to leave sometime. And once outside, the ordinary may seem more drab than ever."--Neil Genzlinger in the New York Times from his lengthy story on Wizarding World, the Harry Potter attraction... He says it's "not really an attraction that you do, it's one that you absorb."

And speaking of Harry Potter, here's a quote from John Grisham:

"I laugh when I tell people I'm a famous writer in a country where nobody reads," he said.

But Grisham may want to change that. Speaking of the 13-year-old protagonist of Theodore Boone: Kid Lawyer, Grisham said, according to the Telegraph : "Theodore is really an effort to catch Harry Potter. Back in the 1990s I was routinely introduced as the bestselling author in the world. I tried to pretend like it was no big deal.

"Then along came Harry Potter and suddenly I was number two. I've got to tell you, I really miss being number one. I'm going to catch Harry one way or another."

In my heart, John Grisham will ALWAYS be number two, or three, or five hundred... Just sayin'

For those of you who followed this (or maybe even entered,) the winners are:

This year's Amazon Breakthrough Novel Award contest, sponsored by Amazon, Penguin Group and CreateSpace "in search of the next popular novel," includes for the first time a YA category. Winners are:

McArdle and Ackley each receive a $15,000 advance and publication by Penguin. Amazon customers voted on the nominees.

McArdle, a retired American diplomat who lives in Arlington, Va., follows a female U.S. diplomat in northern Afghanistan who provides aid to refugee women fleeing the violence there. She becomes their farishta, or "angel," in the Dari language.

Ackley's career has spanned everything from public administration to labor relations for top automakers. She lives in Brighton, Mich., and is the mother of three children. Ackley was moved to write Sign Language after the death of her father and two close friends to cancer.

Click here to read excerpts from the winning novels.

An HBO marketing apology for TrueBlood:

So, what did you think about the first episode last Sunday?

Last Friday night Phil and I had dinner with our good friends Jay and Patty Salam. It was kind of a belated birthday celebration. Here we are with our cutey pie waiter, Billy. 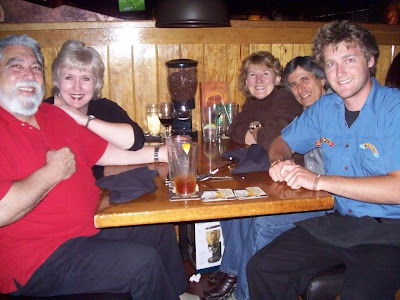 Now, as handsome as this group is, look closely at the back of the booth. Here's what they brought me... 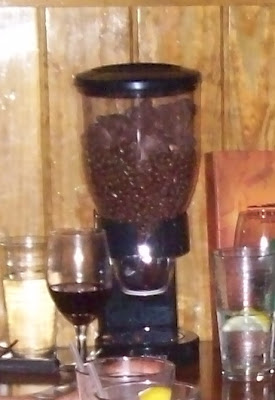 Is that not the best birthday gift EVER??????

And last (but not least) it's official! From Publisher's Marketplace:

Comments:
Congrats on the sale! :-)

That's great new for us Anna fans and for you as well.

I want to hit that new Harry Potter park so badly. One of these days my honey will be done with school, and we can take a vacation again. That is going to be my first stop.

thank you for the congrats. In this publishing age, one can't ever be too sure!!!

Did that come through? I'm up here in the rarified air of Crested Butte -- Thank you all for the good wishes--

Congrats on the sale!

I plan on hitting HP world when I'm in orlando for the RWA national conference.

The tot "graduated" from kindergarten today. She's now a first grader. ~sniff~ I guess I'll have to call her something other than the tot now.