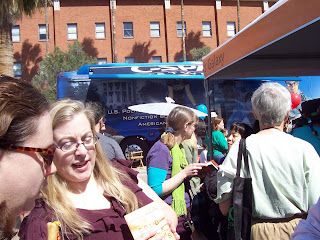 Had a very nice time at the Tucson Festival of Books. Friday night I had dinner with my favorite indy bookseller, Maryelizabeth Hart of Mysterious Galaxy (above in front of the booth with the scarf). We even had a chance to spend some time in Trader Joe’s- Arizona style. Who knew each TJ’s had custom bags? Here’s a peek at the CA and AZ bags. If you live in a different part of the country and have TJ’s, let me know if you have a different bag, as well. Silly thing to get excited about, but I did.. 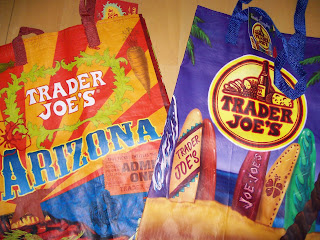 Pal Shannon Baker , author of Ashes of the Red Heifer, flew down on Saturday and we had a chance to catch up, have a nice lunch, and wander a bit through the booths…although there was very little wandering done actually. Too crowded. And hot. I had to duck into a nearby Urban Outfitters and buy myself a blouse. But the signing at the MG was fun and the panel, Vampires That Don’t Sparkle, came off without a hitch. Nice to finally meet Marta Acosta and along with fellow panelist Esther Mitchell and moderator Mike Camp , owner of Tucson's Heroes and Villains Comic Book Store, a good time was had by all.

I should have taken more pictures but the crowds made it nearly impossible. Got a book autographed by Emma Bull who, as you UF geeks know, is one of the pioneers of our genre. Charles De Lint was there, too, but I wasn't able to catch up with him.

On to the week’s news and views.

The deal involves digitizing up to one million books held in the National Libraries in Rome and Florence.


Wow—how cool is this? Now the only problem will be translating them but I’m sure that’s going to happen, too…

For you Patricial Cornwell fans—which, I must admit, I cannot be numbered among:

The television network has attracted some moderately big names, let's call them B minus list, for the pair of Cornwell inspired films it that will begin airing in April, including Andie MacDowell, Annabeth Gish and Diahann Carroll.

In "At Risk" a rising star of the Massachusetts State Police, Win Garano (Daniel Sunjata), is sent by his boss D.A. Monique Lamont (MacDowell) to investigate a Tennessee murder that's been unsolved for more than 20 years before. In the sequel, "The Front," Lamont and Garano reunite to investigate a decades-old murder of a young blind woman

Sounds like they are not Scarpetta stories. Although in February it was announced in the LA Times that Angelina Jolie is set to play Scarpetta in an upcoming movie. One which, by the way, is not based on one of the books either, but an original screen play: Set in the present day (as opposed to the late 1980s, when the series begins), the film will feature a distinctly younger Scarpetta in the years before she becomes the steely, unassailable expert pathologist she is today.

So if the movies are not based on the books and don’t even take place in the same time frame as the books, are they really Scarpetta movies? I think not. 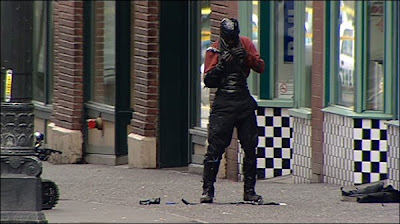 SEATTLE – A man claiming to be a "vampire" and a "space cowboy" was arrested in downtown Seattle after he approached the King County Courthouse with a suspicious pipe device duct-taped to his arm, officials said.

Detectives later determined that the device was fashioned to look like a pipe bomb but it was not an actual explosive.

A vampire AND a space cowboy? Come on, make up your mind…PS Judging from the pictures, my vote is space cowboy.

This one is sure to offend the feminists in the audience, but I thought it was funny : 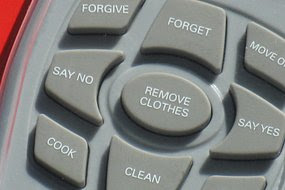 A Melbourne woman is outraged after discovering a Borders book store was selling a 'control a woman' remote.

The toy product, similar to a TV remote control, is being sold as a novelty gift for $14.99.
Katie Robertson saw the remote in a Borders book store last week, after attending a lunch celebrating International Women's Day.

"There are certain buttons on there. For example, the male may decide that he wants beer, sex or food. He may press a button in which he requires the woman to remove her clothes, cook, clean, leave, [or] say yes," she told ABC Radio's Jon Faine.

"There's also a button in which you can increase her breast size."

Lauren Thompson of Borders says the product is intended as a joke and says they are also selling a 'control a man' remote, which has sold out...

Ms Robertson has complained in writing to the store, but Ms Thompson says they will not take it off the shelves on the basis of one complaint.

"We've probably got a number of products, books and literature which could fall into that category... so we need to be quite careful," Ms Thompson said.

As one astute commenter asked: Since the "Control a Man" remote sold out while "Control a Woman" remotes were still in stock, assuming similar numbers of male and female remotes, wouldn't this suggest that women are more sexist than men?

Now, let’s think about this women—what buttons would we want on a Control A Man remote???? The possibilities are endless!!!


Looking for an agent? Four up and comers who may be looking for you


Just got this book. I’m looking forward to reading it.

So, have you gotten your messy bookcase pictures in yet? Contest ends March 30 at noon—post a comment here and send the pics to: author...at...marioacevedo...dot...com

And don't forget all our pals who have new books out there (including of course, Mario's Werewolf Smackdown). Check the side bar here and don't miss a single one!  ¶ posted by Jeanne Stein @ 6:00 PM

The tot had a fab bday and her party is sunday. She went to toys r us tuesday and bought herself a Nintendo DS with all the money she's saved.

I loved the agent article. Thanks for posting that.

I just found out my Steampunk YA manuscript finaled in a contest. I was excited, lol.

The pics from Tuscon are fab. :)

He Suzi-- did you get the package I sent? I'm so glad the Tot had a nice birthday. Hoping her party is filled with surprises!!

Congrats on finaling-- keep us informed!

no package yet. It must be with my sister in law's check for her girl scout cookies :) We're on the look out. I have some pictures to send you.

Have you played "pocket god?" It's a rather interesting iphone app where, among many thing, you can turn people in to ghosts and zombies. the tot loves it.

I think the woman who complained about the remote just needs to get laid.

Hey Shannon-- I think you're right. I still think we should come up with buttons for the male remote...like one to put down the toilet seat. And speaking of enlarging things...

Suzi-- no games for this chickee...too distracting and I'm so easily distracted!!

I've seen that remote before and I thought it was hilarious. However, I have been told by one of my guy friends before that he makes a better feminist than me, so take my thoughts on the remote as you will.

Was at the comic shop today and placed an order on Mario's comic that comes out in May as well as the stand-alone Angel story arc "Barbary Coast" which starts in April. It's supposed to be about him not long after he gets his soul.

Also, Jeanne, the trailer for "Vampire Forensics" is as cheesy as all get out, but the book concept good. Let us know what you think of it once you've read it!

I wish blogger let you edit your posts lol.

Lady K received her fab package yesterday, her birthday. She loves it! Thankin' you, you sweetie!

I would totally be collecting those Trader Joe totes. Those rock!

Working on getting my pics of the messy bookshelves. It's been a crazy week. I'll get them to Mario ASAP.

I would love to meet Charles De Lint. Amazing writer.

I want top submit pictures of my messy bookshelves, but that is the one place in my tiny little house that is neat and arranged!

Hey Vickie-- why did you remove your remote message? I LOVED it!!! :-)
And SO appropriate!


Glad Lady K liked her gift. I look forward to pics from you and Suzi--

Leia-- thanks for the heads up about the new Angel comic. For some reason, I'm not getting notified the way I used to. I'll have to find out why.

Jeanne it looks like it will be a standalone story arc, which for Angel/Spike comics usually means a 4-5 issue run. I don't try to spread myself out too much, but this one looked good. I love reading about key "transition times" when characters are forced by circumstances largely outside of their control to adjust, and must deal with the issues that those circumstances force upon them. I'll let you know what I think. The first issue comes out April 28.

J: Removed after thinking that somehow DH might see them, silly I know...only a couple of them actually pertain to him.
I'll repost what I remember:

~Put the toilet seat down button
~Give me the TV remote control button
~Refill the ice tray button
~Stop with the farting button
~Make that really 6 inches, not what you say is 6 inches button