Wednesday, March 10, 2010
Signs of Spring There are two sure signs of spring in Colorado== avalanches and this: 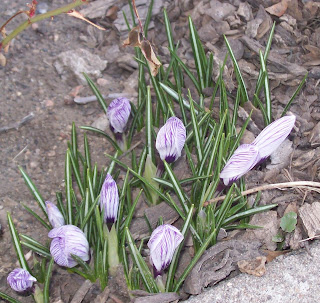 Makes me feel warmer already. Any signs of spring in your neck of the woods? If you want to send pics send them to jeanne@jeannestein.com and I'll post them next week.

Oh—Mario said at his last signing that people didn’t know who was posting when. Now, I think most of you realize Mario posts on Monday—mainly because he likes to talk about himself. A lot. But to make things easier, I will announce at the beginning of my posts—Jeanne Here. 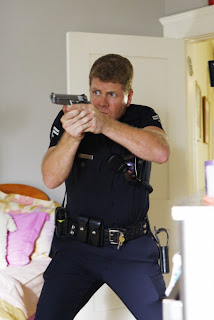 Are you watching Southland—the best cop show on the air? And I’m not the only one who thinks so. Ex-cop and writer Lee Lofland posted this review. Here’s a sample:

The attention to detail in this show is incredible. Officer Cooper (above) placed his keys in his gun belt, near the buckle. Real cops do this, too. He also hangs his sunglasses from the pen slot in his shirt pocket. Cooper is left handed, so his magazine pouches are placed to the right of the belt buckle on his gun belt. This is so he’ll have easy access for reloading with his right hand. Cooper’s pepperspray canister is also strategically placed on the right side. FYI - The narrow vertical straps with two silver snaps, one above the other, are called belt keepers. They attach the gun belt to the officer’s regular belt that’s threaded through the belt loops on his pants. Belt keepers prevent the gun belt from sliding down to the officers ankles.

Check out the review and then check out the program. If you want more than eye candy in a cop show, you’ll like this one.

Will the remakes ever stop? From the Hollywood Reporter : 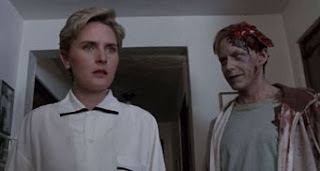 Matthew Greenberg, who wrote the Stephen King adaptation "1408," is heading back to King territory with "Pet Sematary."

Lorenzo di Bonaventura recently boarded as producer on the long-gestating project, which is set up at Paramount. Steven Schneider also is producing.

Published in 1983, King's creeper tale centered on a family that trades the city life for the country life in Maine, then discovers that they have moved near a pet cemetery that rests on an ancient burial ground. When the husband's toddler son is killed in an auto accident, the father takes the boy's body to the cemetery, where it is
resurrected in demonic form.

Paramount brought the book to life in 1989, with a feature version adapted by King that starred Dale Midkiff, Denise Crosby and Fred Gwynne.

The new project at one point was being produced by Alphaville, working with a screenplay by Mike Werb and Michael Colleary ("Face/Off"), and had George Clooney circling.

Greenberg, repped by UTA, has carved out a career in the fantasy and horror genres. Among his credits are "Reign of Fire," "Halloween: H20" and "Mimie.”

Meyer slips? How will we ever get over it? From USA Today :

Is that old vampire magic beginning to lose its spell? Maybe just a bit. For the first time in more than two years, a Stephenie Meyer Twilight series book is not in the top 20. Eclipse falls to No. 23 from No. 13 last week; Breaking Dawn is at No. 24, down from No. 14; and New Moon, which was No. 20, drops to No. 31. Rounding out the Meyer offerings in the Top 50 this week is Twilight, which was No. 27 last week and is now No. 44. Two of the books have been made into movies —Twilight in 2008 and New Moon in 2009 — pushing book sales and rankings on the list higher. So expect another Meyer surge as the June 30 release of Eclipse, the movie, draws closer.

A new law in Colorado requiring Amazon.com and other online retailers to tell customers in the state how much they owe in sales tax--but doesn't require them to collect sales tax--has led Amazon to stop doing business with third-party vendors in Colorado, according to O'Reilly Radar.

Amazon sent letters to "associates," informing them of the decision. For states in which Amazon has no distribution centers or offices, associates have been cited by states as creating sufficient nexus for requiring the e-tailer to collect sales tax on purchases to people in those states.

Here’s what happens when cash-strapped states start looking for revenue.

From Shelf Awareness : On the occasion of Holt's halt of publication of The Last Train from Hiroshima by Charles Pellegrino because parts of it are based on false testimony and perhaps wholly fabricated, the New York Times has another OMG article about authors who play loose with facts and publishers who don't catch them.

* * * *
I think I’ve mentioned this before, but here’s the skinny on when you can get your hands on an iPad:


Apple Inc. said the iPad will hit stores next month, a few days later than expected but not enough to rattle investors eager to see how consumers respond to the new device.

The Cupertino, Calif., company said it will first begin selling a version of the iPad that uses Wi-Fi to access the Internet on April 3 in the U.S., while a model that also gets online through wireless carriers' high-speed 3G networks will go on sale later that month.

Apple will begin taking orders for the iPad from U.S. customers on its Web site March 12.

And now Samsung joins the party. From PC World: 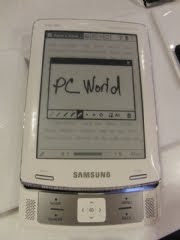 Samsung "dove headlong into the electronic book market" yesterday with its introduction of the $299 Samsung eReader and announcement of "a relationship with Barnes & Noble which allows the eReader to access B&N's arsenal of more than a million e-books and e-magazines as well as access to Google Books," PCWorld reported. The new device also allows users to take notes in the margins and share content with other Samsung eReaders.

* * * *
A nice LA Times Article about adults who read YA. I know I do. What about you? Who are your favorite YA authors?

Anybody want to give this a try? Email a picture of your book shelf and it will be analyzed by the New Yorker Book Doctor…What do you think they’d say about mine? 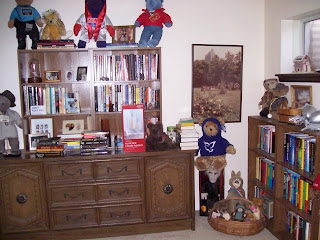 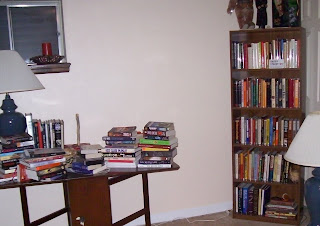 I can’t even get all my bookshelves in one photo—or two. There are still two other walls of books in this room.

If you’re in the Tucson area, I'll be attending the Tucson Festival of Books this weekend. Stop by and say hello. Look for me at the Mysterious Galaxy booth Saturday afternoon at 1 PM and on the panel Vampires That Don't Sparkle, Saturday at 4 PM.

PS In case you missed it, we got hit again by "anonymous" who doesn't even do us the courtesy of spamming in English. So, for the time being, I've removed the anonymous option. I'm sorry if it causes any inconvenience, except to the spammer of course.  ¶ posted by Jeanne Stein @ 3:44 PM

Comments:
Ooh, have fun in Tuscon!!!

I read a lot of YA (since I'm trying to write it, lol). The gurlz in my dance class often bring me theirs. My faves include the Wicked Lovely books, Once dead twice shy, the Vampire Academy series, Shiver, A great and Terrible Beauty, and the Bones series.

The tot likes the Gallagher girls series, I read them to her out loud (teen girl spies, what's not to love, lol).

I made soda bread with the tot's class yesterday and tomorrow I'm bringing snack for her birthday. :)

Have a great weekend. :)

And give the tot a birthday kiss from Anna--

Meyer is slipping and that in not a bad thing. A quick glance at any bookstore will let you know that vampire books (especially those of the YA variety)are not in short supply. I haven't really read any of them as I somehow managed to skip reading YA altogether when I was younger and never really looked back, but the media focus on vampires appears to be shining light on number of series that have been in the works for a while but never got the publicity.

I can't believe that True Blood is still like four months away. Charlene Harris does have a new book coming out in May though, "Dead in the Family," which I have decided to buy the hardback of. I usually wait a year for the Mass Market as I'm a penny pincher, but after the way her last book ended I've decided to say "forget it" and read it from the get go. So we only have to way another three months for more Charlene Harris.

I think they would say that your bookshelves are a heck of a lot neater than most. Just curious, do you organize by author, series, alphabet, year released, what? I think it would be fun for us to take turns analyzing each others' book shelves :p

Hey Leia- Actually some of my books are organized by author, most are organized by subject-- I have a Sherlock Holmes case, a Robert B. Parker case and a James Bond case. But the problem is, I pile books as I read them on the table and chairs and tell myself I'll put them away SOON. Trouble is, SOON doesn't seem to ever come!! I don't know why I can't put them away as I finish them but I don't..