Wednesday, March 24, 2010
March Came Roaring Back Remember when I showed you that sweet picture of crocus poking through the ground? Well, that was then and this is now… 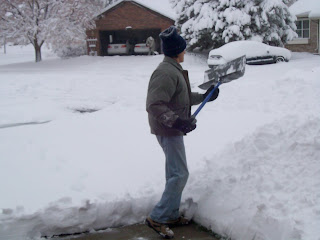 Before Mario can make a snide comment about making Phil do all the work, I was right beside him, see? 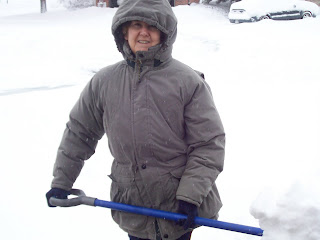 Note to self: Never buy the house on the cul-de-sac with the longest driveway.


And speaking of Mario, here are some pictures from Mario’s smashing signing at the Tattered Cover on Monday.

Many of Mario’s friends and our entire critique group turned out en masse to break bread with him before the signing. 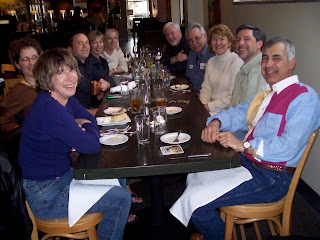 Then Mario in his splendid multi-colored shirt entertained the troops in his inimitable style. 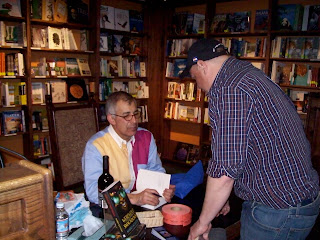 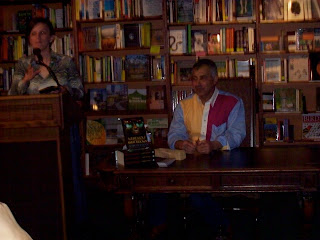 A nice crowd, very receptive, and they proved it by buying lots of books. I think the addition of live music helped, too. 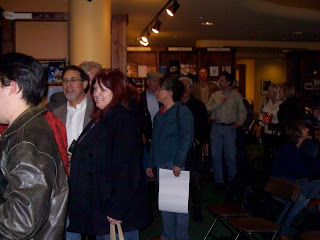 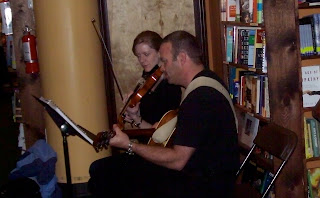 If you’ve been waiting for the next Richelle Mead, go here to read an excerpt from Succubus Shadows (release date April 1)

Pal from Down Under Tez Miller compiles a complete list of UF releases every month. Here’s the one for April complete with US and UK dates and covers.

Mario is racing full tilt along the new book promo trail. Here’s his Undead Threat to America in case you missed it.


Now that I’ve done my duty to my pal, I have to admit this next is one of the best book trailers I’ve ever seen. The Lost Summer of Louisa May Alcott by Kelly O'Connor McNees (Amy Einhorn Books/Putnam). Watch to the end.

Have a vampire film you’re ready to unleash on the world?

"In 2009, Vampire Fest presented over 50 films from filmmakers across the globe. It is our mission to surpass that number in 2010 and present an even bigger festival," offered festival director, Asif Ahmed

In 2010 harnessing the spirit of the festival's new home, New Orleans. The festival is now seeking films dealing with Voodoo and Witchcraft in addition to Vampire Films, Gothic Films and Mythic Horror Films.

Also new in 2010 the festival will include music videos. Filmmakers and musicians who have vampire/gothic/ themed music videos or any musical work with themes of the occult including zombies, werewolves or ghosts or witches are encouraged to submit their work.

All deadlines and submission guidelines are now posted on the official website or Withoutabox.com 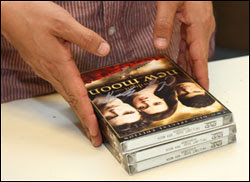 From Variety -- "Twilight" fans flocked to stores to pick up a copy of the "New Moon" DVD, with the title selling 4 million units over the weekend.

Helping "New Moon" was Summit's strategy of holding midnight launch events across the country at 7,000 retail outlets, as well as viewing parties, which drove up interest in the title. This was particularly the case among fans who could meet cast members at some of the locations. Releasing it over the weekend, rather than on the traditional Tuesday launch for DVDs, also likely helped drive up sales.

And: HONG KONG — One of Peter Jackson's frequent collaborators says the "Lord of the Rings" director passed the torch to Mexican filmmaker Guillermo del Toro to give the trilogy's two-part prequel, "The Hobbit," a fresh look.

Jackson is working on adapting the J.R.R. Tol kien fantasy novel that takes place before the trilogy. But this time, he is producing and working on the script, relinquishing directing duties to Del Toro, whose credits include "Pan's Labyrinth" and the "Hellboy" movies.

Art designer Richard Taylor says he thinks his friend gave up the director's chair "probably because he's spent so long in Middle Earth . . . and probably felt a director such as Guillermo could bring something passionate and unique and original and new to the content. AP full story here .

Remember to send us those pictures of your bookcases. Contest is open for one more week.

So what are you doing to greet spring? Is it spring yet where you live?  ¶ posted by Jeanne Stein @ 2:43 PM

Comments:
I'm in Chicago, I don't think we do spring here...we do spring like, but not actual spring. One day it's winter and then BAM summer in all it's humid, sticky glory and then back to winter with some fall like days thrown in.

Hi CLJ-- my daughter used to live in Chicago. She would agree with your description!

J: Ahhh...there you are! The post was here earlier, then it disappeared just as I was getting ready to post.
Loved both videos. Now I'm going have to succumb and get THE LOST SUMMER OF LOUISA MAY ALCOTT once it's out in MPB. I am intrigued. Those poor electronic devices! Lady K saw the Kindle getting run over and then the iPod and gasped that those people must be rich to be able to do that! *grin*

We had 11.5 inches of the wet heavy snow and I got to shovel all by myself. I am home on spring break with Lady K and DH didn't get the call to not come in after sleeping in and hoping for the call....so he went in and I shoveled...and shoveled...and shoveled...Made a hill for Lady K in the back yard to sled for a while, then we walked down to her school and had a great time sledding down that hill. I had to make the path and smooth it out, then turned her loose on it. I posted pics on the blog. http://iyamvixenbooks.blogspot.com/2010/03/how-we-celebrate-spring-break-in.html

I look forward to seeing Guillermo's vision for Middle Earth.

Okay, off to finally get some pics of the bookshelves for Mario. I'll have to include Lady K's, too. Hers is nuts!

Sorry, Vickie-- for some reason Blogger kept dropping one of my pictures. It would be there, then it was gone. I hope I've fixed it now.

I'll look for the pics. That was some storm, huh? Glad at least you and Lady K got some fun out of it!

Can't wait to see those bookcases!

The pics are sent. One is of Lady K's bookshelves and if you look carefully up top, you can see the Princess Duck on the beads overseeing the book collection.

DH sent the link above for March storms. Lady K was born in the blizzard of March 2003. We credit that for her joie de vivre and love of snow. *grin*

You look miserable shoveling snow. I hope you were.

Um, we don't have bookshelves. Seriously. Since the move all our books are still in boxes. Yeah, it's only been since october. Sad, lol.

Have fun at the signing.

It's very blustery today. The chickens don't like the wind much, lol.

Jackson did what? Are you serious? That cannot be true ... especially after the fight that LotR fans had to put up in order to make the company back down and let Jackson take the helm again.

Hopefully it is a vicious rumor. That is what I must keep telling myself as I was one of those geeks that missed a number of good movies due to the New Line Cinema boycott.

The author of "The Lost Summer of Louisa May Alcott" lives in Chicago. In fact, she's doing an event on Thursday (the 8th) at the Barnes and Noble on Webster and Clybourn.

Both the Kindle and iPod in the video were broken beyond repair. Having lived out their utility, they graciously sacrificed themselves for a greater cause. We remember and honor their sacrifice.