Wednesday, March 31, 2010
Drum Roll Please... We have a winner for our messy bookcase contest and it’s a doozy. First though, some runners-up. 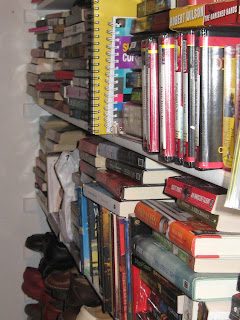 This came close to being the winner. Storing shoes in the bottom shelf was a nice touch. This particular Biting Edge reader is a regular and I won't post her name to save her the embarrassment. Better luck next time, Vickie. 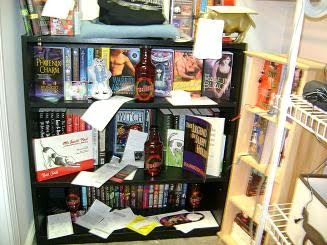 The scattered pieces of paper looked a bit staged, but if one goes to that much trouble, one should get recognized. So here's to you, RT Thompson.

Now for the moment you've been waiting for. The winner is: 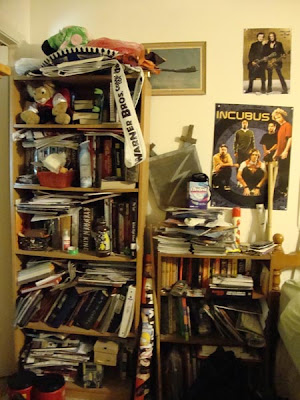 I understand this case belongs to a teenager which means it's supposed to be messy, but this goes above and beyond. I shudder to think what the rest of the room looks like. Congratulations! And condolences to your mom. Send Mario your address: author...at...marioacevedo...dot...com and we’ll get a prize package off to you. Give us a week or so since I'm traveling and Mario is...just Mario.

One further note-- some of you tried to slip neat bookcases past us-- like this one: 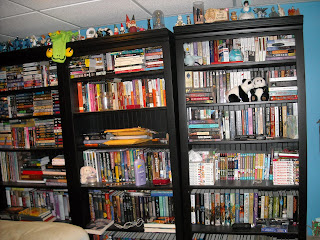 # # # #
I have a lot of book news but first, maybe a little personal announcement. Here’s a first peek at the cover for Chosen. Release date is August 28. There’s a preorder link on Amazon if you are so inclined. The cover is still being tweaked, but basically, this is it. 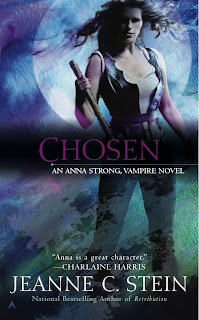 Also, a few appearance updates. Here’s my Norwescon schedule for this weekend:

Back in Denver, I'll be part of Phi Sigma Sigma sorority's Barnes and Noble Book Fair to promote the importance of Life Long Learning. The fair is April 9th and runs from 9:00am til close at the 16th street mall location: 500 16th Street, Denver.

Check the schedule page on my website for details and links for more info. 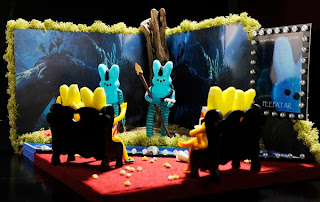 Every year the Denver Post runs a Peep diorama competition. The winner this year was Molly Cassell’s “Avatar” scene. Here’s a peek at more , and just in case you’re wondering also included are the following helpful hints: cats will steal a Peep to lick off the colored sugar, and if you leave Peeps out overnight, they won't melt under hot glue.

Little, Brown Books for Young Readers will release Stephenie Meyer's first new title in almost two years--both in hardcover and a free online edition. Entitled The Short Second Life of Bree Tanner, the novella will sell for $13.99 with a 1.5 million copy first printing. 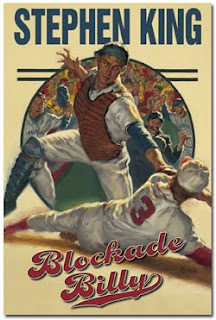 "People have asked me for years when I was going to write a baseball story," King said. "Ask no more; this is it."

The book will be available "in a few weeks," according to EW, which wrote that the first copies will come with a baseball card featuring the protagonist. Cemetery Dance's website also cautions that the "novella is not scheduled to be reprinted in King's new collection due out this fall, and we're only printing a small number of first edition copies compared to what Stephen King's New York publishers print for a brand new book. We'll be filling direct orders first and then distributors, online stores, and the chains if there are copies left available after we've taken care of our regular customers."

Cool Idea of the Day: Books for Servicepeople

"We ask our customers for names and addresses of any soldiers, airmen, or marines they know who are serving overseas and we send them a box of books to share with their fellow soldiers there," Melanie Tighe wrote. "It costs $13 to send 26 paperbacks to Iraq or Afghanistan, and it gives our troops something to do during their off duty hours."

Tighe noted that several returning soldiers have said "there is a shortage of reading material over there."

The store is promoting the effort online. "We have found the community to be very generous both in donating books and postage for this program," Tighe added. "Our local news station even came out and gave us some publicity for the program."

Hmmm.. go here for more. And right before Easter, too…

# # # #
The View from the Top: latest issue of Publishers Weekly has the annual list of the previous year's bestselling books. 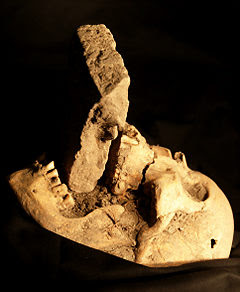 ROME - An archaeological dig near Venice has unearthed the 16th-century remains of a woman with a brick stuck between her jaws - evidence, experts say, that she was believed to be a vampire. The unusual burial is thought to be the result of an ancient vampire-slaying ritual. It suggests the legend of the mythical bloodsucking creatures was tied to medieval ignorance of how diseases spread and what happens to bodies after death, experts said
# # # #
Remember when I mentioned this a month or so back? Well, the results are in:

Crocheting Adventures with Hyperbolic Planes by Dr Daina Taimina (A K Peters) has won the 2009 Diagram Prize, having received the majority of the public vote for the oddest titled book of the year at thebookseller.com. Taking 42% of the votes cast, it beat off competition from What Kind of Bean is this Chihuahua? By Tara Jansen-Meyer (Mirror), which took 30% and Collectible Spoons of the Third Reich by James A Yannes (Trafford), with 11%.

I still liked Afterthoughts of a Worm Hunter better myself.

EXCLUSIVE: Best-selling author Michael Connelly has sued Paramount Pictures, alleging the studio sat on film rights to two novels for 15 years then improperly inflated costs when Connelly tried to buy the rights back. The complaint, filed today (March 22) in Los Angeles Superior Court, says a 1992 option deal gave Paramount 15 years from the date of exercising its option to begin shooting film versions of Connelly's Harry Bosch crime novels "Black Ice" and "The Black Echo." If the studio failed to get the films off the ground, Connelly would get a one-year window to re-purchase rights subject to paying the studio's development costs plus interest.

More from The Hollywood Reporter here :


And something for you writers out there, courtesy of Peg Brantley who brought it to our attention:

So, I think that does it for this week. Happy Easter, Passover, Springtime…however you celebrate this time of renewal, I wish you all happiness.

Comments:
Love the cover! I realize that Anna can't see herself in the mirror so I could understand if her self image changed over time. But the cover designers can actually see what she looked like on other covers--what's their excuse?

sigh.....at least I lost to a truly amazingly spectacular specimen.

LOL! On picking my son's book cases. Those book cases of been a sore point with me for awhile. The rest of his room is as cluttered as any teenagers but it is clean at least. He collects everything and doesn't like to throw away anything. ::heavy sigh:: He got a kick out of being picked. Thanks!

What a great cover!

This are six kinds of chaos over here. We're leaving for AZ tomorrow to visit my dad, now that he's out of the hospital.

I also have Steampunkapalooza going on at the steampunk group blog I do. An entire month of special guests, prizes, and mayhem -- and I'm in charge. How exactly did that happen, lol? But I guess that's what happens when an event planner is out of work, right? But I'm pretty proud of it, we have some very amazing guests and prizes (we have a contest launching sunday I think mario should enter. It involves designing steampunk clothing ensembles....)

lol that is messy for me though. I mean, possibly the messiest I've ever had it (barring when I move). I'm rather OCD about arranging my books, about organization and such, but I've been so tired lately I've just kind of tossed things on my shelf to remember where I put them.

hm pictures aren't showing up for me so I can see the really messy ones!

but ah see I didn't classify Mario's as messy, I classified his as deadly because if any of my shelves looked like that for even half a day it means I'm six feet under...

Hi all- quick note to let you know I'm not ignoring you. I'm up in Seattle at Norwescon. Got to bed at 1 am last night and am up at five. I'll be doing it all over again today. On Sunday-- crash and catch up!~!!

Oh I love the new cover! I'll be placing a pre-order with the local bookstore on Wed. :) I hope you had fun at Norwescon.