Feb. 23 was a big day for four of our good friends over at the League Of Reluctant Adults. It was Release Day!! Here’s the list:

Blood of the Demon – Diana Rowland

All four will satisfy your cravings for a good read and in the process, you’ll bask in the warmth that comes from knowing your support saved another writer from standing on a street corner with a sign “Will Write For Food.”

Remember, we’re all just one book sale away from unemployment.

From Shelf Awareness: J.K. Rowling's name has been added to a lawsuit that alleges she stole ideas for Harry Potter and the Goblet of Fire from a 1987 book, The Adventures of Willy the Wizard--No. 1 Livid Land by the late Adrian Jacobs. The Associated Press reported that Jacobs's estate "also claims that many other ideas from Willy the Wizard were copied into the Harry Potter books."

Although the lawsuit was filed last June against Bloomsbury Publishing, Rowling's name was added more recently when it was discovered that "the statute of limitations to sue her had not run out, as previously thought," the AP wrote.

"I am saddened that yet another claim has been made that I have taken material from another source to write Harry," said Rowling. "The fact is I had never heard of the author or the book before the first accusation by those connected to the author's estate in 2004; I have certainly never read the book. The claims that are made are not only unfounded but absurd." 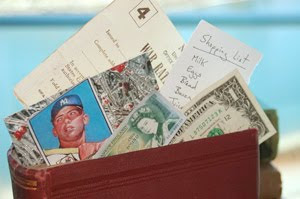 Be careful what you use as a bookmark. Thousands of dollars, a Christmas card signed by Frank Baum, a Mickey Mantle rookie baseball card, a marriage certificate from 1879, a baby’s tooth, a diamond ring and a handwritten poem by Irish writer Katharine Tynan Hickson are just some of the stranger objects discovered inside books by AbeBooks.com booksellers.

Lots of story ideas here! The creepiest one is from Sandra at Nan’s Book Shop in Ill.

“Inside an old children's book, I found a green card; on one side was written in a child's print: “I love you, do you love me?” The answer was written on the reverse: “ I hate you and nobody loves me.” There were several additional cards saying "Nobody loves me."

Anyone seen Wolfman yet? What’d you think?

The finalists have been named:

The six finalists are "Afterthoughts of a Worm Hunter;" "Collectible Spoons of the Third Reich;" "Governing Lethal Behavior in Autonomous Robots;" "The Changing World of Inflammatory Bowel Disease"; "Crocheting Adventures with Hyperbolic Planes;" and "What Kind of Bean is This Chihuahua?"

The shortlist, announced Friday, was narrowed down from 90 entries, including "The Origin of Feces" and "Bacon: A Love Story."

The Diagram Prize was founded in 1978 and is run by trade magazine The Bookseller. The winner, decided by public vote, will be announced March 26.

Previous champions include "Bombproof Your Horse" and "Living With Crazy Buttocks."

From the Hollywood Reporter – 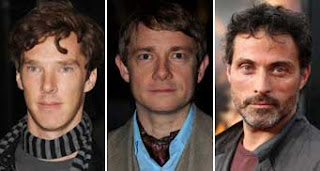 The announcement takes a page from the big broadcast network playbook, giving PBS a trio of popular titles, with two that tap into the crime procedural genre.

"Sherlock" will present a 21st century spin on the classic detective stories and stars Benedict Cumberbatch ("Atonement,") as Holmes and Martin Freeman (U.K.'s "The Office," "Hot Fuzz") as Dr. Watson.

And finally, Rufus Sewell ("The Eleventh Hour") will star as Italian detective Aurelio Zen in three episodes based on the mystery novel by Michael Dibden. The series is being shot in Italy.

"I'm so proud of this particular group of programs," says "Masterpiece" executive producer Rebecca Eaton. "These three series say everything about what 'Masterpiece' aims to be: iconic, rich with wonderful actors, witty, literate and timeless. I can't wait to see them all."

For you writers—a couple of contest you might want to check out:

And if you follow these things: 2009 LA Times Book Prize Finalists


PS Mario asked me to remind our fellow Denverites that he will be appearing at:

Comments:
So let me see if I understand this: PBS's vision for the future is to have the exact same programming as they did 30 years ago. Ahhh.... that explains it. I'd love to go off on a rant, but it's not my blog. But let me re-emphasize my comment last week about how mch I appreciate original stories, not the remake of the remake based on a theme song from the commercial jingle et al. Really, create a unique sense of wonderment/emotion/whatever experience you may, not an attempt at an identical experience as before.

I'm so behind this week! Not a whole lot to say, but the man suing Rowling should be ashamed of himself. Also, I adore the comic you posted. That is exactly how I feel when it comes time to write end of the year papers. Between a historiographical paper on Cahokia burial mounds and a exhibition proposal/research paper about post-mortem photography this semester, there will be more than enough writer's cinder block to go around.

Have a great weekend everyone!

Catfriend (I always want to write Catfiend..I guess I'm thinking of my sis) Anyway, I just saw in today's paper that the Masterpiece show tonight is a remake of The 39 Steps. I suppose that just goes to show there are NO new stories out there worth writing. Let Joss Whedon loose, I beg of you!!!

Hey Leia...yes, I've been smacked by that cinder block once or twice myself!!!

Hmmmmm.... love to hear you say "fiendish catfriend" three times in a row really fast, especially after a couple of margaritas. I promise I am neither a demon nor perversely cruel.

The 39 Steps is a book that I do not recall ever reading, although I have seen both Hitchcock's original and his own remake (The Man Who Knew Too Much) and the 78 movie remake. The Hitchcock remake is one of those rare exceptions (in my mind) of a remake (of a good movie) of a book wherein the remake is the equal or better of the original. They both work so perfectly within their own contexts. I recall the 78 movie as plodding, but I last saw it when it came out. I'm not going to bother with the tv version. Why? It's been done.

I also consider the remake of the Maltese Falcon to be vastly superior to the original. Who doesn't? The 41 version with Bogey, Astor, Greenstreet and Lorre is such a classic most people don't even realize it's not the original film. It definitely doesn't need to be redone.

There are new stories out there every day. Don't ever let anyone tell you otherwise.

Hey Jeanne! Thanks for all the great posts, as usual.

I wanted to post this little pic of the tot as a vampire that a friend of mine drew...(it's the second pic)

the tot was horrifically disappointed that Anna wasn't a part of the pic, lol.

Have a great week.

I'm one of those who didn't know Maltese Falcon with Bogey was a remake!!

Haven't read the book either, but when I checked, it seems the 39 Steps was made as the 1935 Hitchcock version, made again in 1959, in 1978 and then the 2008 British TV version. Another adaptation is supposedly being done by Robert Towne from the original Hitchcock screenplay. But it keeps getting pushed back and now is slated for sometime in 2011.

I won't be holding my breath.

Loved the drawings, Suzanne...and there's a package going into the mail to you and the Tot tomorrow...

Oh, wow. This is from the RomCom contest? (or our bdays coming early? we both are march girls, lol).

The tot wants a vampire build-a-bear bday party. Not sure if the other mommies would find it funny. Some of the mommy brigade is just plain...well, mommy-ish, lol.

Hey Suzanne-- you haven't gotten the RomCon prize yet? I mailed it to their coordinator who was supposed to send it to the winner. I didn't know it was your birthday, in March, too. I just wanted to send you something that wasn't in the prize package since you already have all my books and swag... I'll have to check with the coordinator.

Anyway, since I now know, Happy March Birthday, too!!

I just found the RomCom box. :) If I don't get the mail, it goes...somewhere. My name is on the hubby's email account so he assumes all packages on my name are for him, lol. I already used the trader joes bag.

So you're sending us something extra? Wow, that is so very sweet.