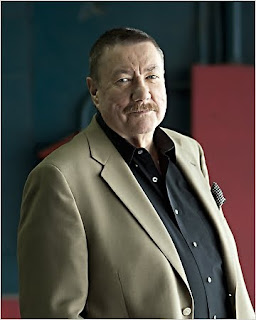 
Anyone who knows me or has taken any of my classes knows how I felt about Robert B. Parker. He was the master of story telling through dialogue. There was never an extraneous word in his prose—whether he was describing a new client, setting up an action sequence, or describing a rainy Boston afternoon. He was pitch perfect in his execution.

He died Monday at his home in Cambridge, Mass. At his desk. Working on a book. It was sudden, unexpected. The cause was a heart attack. He was 77.

I will miss him. I will continue to read and reread his more than 60 books because I think every serious writer should. If you’d like to learn more about him, follow these links. If you don’t, I’ll see you next week…

Comments:
Awwww. Hugs. I am so sorry. I remember when my favorite writer died when I was in college and I was heartbroken.

On a lighter note, I finally got my ms edited and off to Harper Teen. I'm still squeeing over here. Fingers crossed...

Very good luck on your ms. I will be sending positive thoughts your way!!

It is. I guess I thought he'd be around writing Spenser stories for another twenty years.

Like a number of modern notable authors - I have never read any of his works. All the same, I was saddened to hear of his death earlier this week. I was always left with the feeling that he was well respected from within his field, and given his prolific nature, he clearly had a very dedicated following. No matter what genre it is always sad to see good authors go.

It was a hard blow when Robert Jordan passed away about a year ago, and I'm still eaten up inside everytime I read Terry Pratchett and remember that he has been diagnosed with Alzheimers. It's amazing how people we have no personal connection to can touch our lives in such a profound manner with their writing.

Since you seem to have a sense of humor and love all things vampire you should check out this video from a KTLA story on how one town has been keeping out vampires: http://www.youtube.com/watch?v=kC0Rg8REt6A If you're concerned about the link just check out Vampire Prevention Win on failblog.org I think you'll appreciate this...

Leia-- I think I loved RBP from the first time I met him--at a small bookstore called Grounds for Murder in San Diego. Truth be told, I sometimes find myself channeling him when I write Anna. Like Spenser, Anna has a strong moral compass and a fierce loyalty to her friends and family. I just hope I tell my stories with one tenth of his flair and talent.

Wonderful video, Catfriend! Thanks for sharing.

DH and I will miss the Jesse Stone books.

Jeanne, did you have a good weekend?

The tot wants to know when Ann's birthday is. (I have no idea why)

We've been pimping the girl scout cookies. Sigh. I thought Daisy's didn't sell cookies, lol. The tot wants to sell 500--so not going to happen. I don't think we're even going to get to 150 so she gets a t-shirt (that she'll never wear, lol). At least she's in a troop where there's no pressure--my neices' troop is brutal. Yes, I think the girl scouts is a secret organization set out to control the world through mind-control agents put in thin mints...