Thursday, December 17, 2009
What Day Is It? Well, my friends, my mood has lifted considerably. Or at least it had until I was backing out of the garage and watching some guy behind me walking his dog and didn’t realize how close I was to the side of the garage until I clipped it.

Anybody ever hear the godawful noise those metal post thingees make when you bend them? Shit. I got out and looked and it was bent all right. Then I looked at my bumper. Pulled the sucker right out on one side.

Well, the car still works so I went ahead and ran my errands. Then I came home and called Don the Garage Guy who installed the door and he sent John right over and it only cost a hundred bucks. Even serviced the door which hasn’t been done since it was installed so thanks to them and John.

My car will be a different story, I’m sure. But I plan to wait until AFTER the holidays to tackle that problem.

Remember that scene in 2001 when the ape picks up the bone and looks at it and starts waving it and the next thing you know, he’s using it to bash other apes? Well, the octopus might be the next evolving creature… watch this.


And speaking of fish, a big literary fish is about to close:

Editor & Publisher and Kirkus Reviews, two venerable chronicles of the newspaper and book publishing industries, are closing as their owner, Nielsen Business Media, gets out of the trade publication business.

Nielsen said Thursday that it is selling The Hollywood Reporter, Billboard, Adweek, Mediaweek and other publications to a joint venture of Pluribus Capital Management and Guggenheim Partners. But Kirkus and Editor & Publisher simply will go out of business. Nielsen intends to hang on to some print properties, including Contract magazine and Progressive Grocer.

And a sad note Jenny Rappaport is closing her agency:

Owner Jenny Rappaport writes: "It is with a great deal of sadness that I announce that The Rappaport Agency will be closing for business at the end of the year, due to economic reasons. I have been privileged to get the chance to work with amazing people over the last four and a half years, many of who I am proud to call my friends. In the coming weeks, I will be wrapping up outstanding submissions and putting things in order." 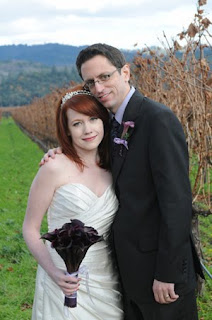 Writer pal extraordinaire Richelle Mead got married. Here’s a pic she posted on her blog and as she usually does, she looks beautiful. Richelle is not only talented, she’s sweet, generous and we wish her and her new husband all best wishes.

Mario mentioned the B&N benefit we participated in. Here’s another pic. This one of Anna and Felix vamp ducks decorated by our own “tot” and photographed in front of the store’s book display. Such talent!!! Love the fangs. I, of course, assumed custody of both. Can’t trust what Mario would do with his… 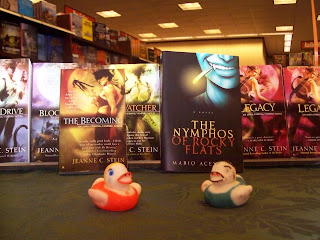 Note I made sure there was a discrete distance between Anna and Felix. He has roving hands---er---wings...

Our critique group had an unofficial dinner a week or so ago before hitting Kathy Gansemer, Warren’s talented wife’s, jewelry show at L'espace. We took a group pic and here it is. 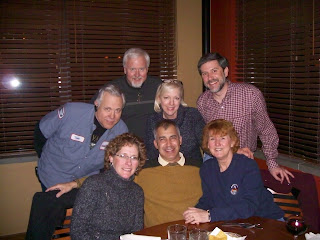 Got the cover copy for the next Anna installment, Chosen:

It’s been almost a year since bounty hunter Anna Strong became a vampire, but as she’s about to discover, her greatest powers have yet to be unleashed…

Though Anna has become accustomed to the fact that she’s now a vampire, she still enjoys the illusion of being human. So when she suddenly notices that her primitive urges are getting harder to control, she’s worried. Then, she’s attacked, narrowly escaping with her life. The only person with enough motive to want her dead is her old foe—Warren Williams. But another more dangerous enemy lies in wait.
What Anna doesn’t know is that she’s far too valuable to kill. For she’s been chosen to shape the destiny of the vampire race—and all of mankind…
“Anna Strong lives up to her name: equally tenacious and vulnerable, she’s a heroine with the charm, savvy, and intelligence that fans of Laurell K. Hamilton and Kim Harrison will be happy to root for.”—Publishers Weekly

“There are more books about young female vampires...but it’s safe to say Anna Strong is contending for leader of the pack.”—The Denver Post

No cover ART yet, but will post as soon as I get it.

I’m making a promise to those who have signed up for my newsletter through the website. Next year I intend to post every month. So, if you haven’t signed up, head over now and do it. I will have a contest giveaway every month to make it worth your while.

I will post a short message next week since it Christmas and I doubt anyone will be waiting breathlessly for my ramblings. BUT, I want to thank all of you for stopping by and sharing your thoughts and supporting Mario and I in our efforts to amuse, shock and entertain. We look forward to 2010. Who knows what surprises await?  ¶ posted by Jeanne Stein @ 4:51 AM

The tot and I are going to Lego Land today--thinking of you.

I'm glad you liked the ducks.

So I had a major dissapointment last week. I overnighted my contest entries to arive a few days before the deadline...and it got there the day after and was disqualified. The post office doesn't know why, doesn't care, and won't refund my money-and neither will the contest. Sigh.

I found out on Friday that an editor wants to see the full for my YA ms( the request is from another contest). It's my dream imprint too. Glad it's finished, lol. So, my crit partner and I are editing away so I can ship that baby off, lol.

Have a great day!

I, for one, look forward to your Thursday efforts to amuse. The past couple of days have been so awful I was especially looking forward to today's post. Really, I only wish I bashed in my car....that would be an improvement! Didn't know about the newsletter so just went and signed up for it. Here's to more amusement from Jeanne and Mario!

Catfriend, we will do our best to make you smile. Honestly, this can be the most depressing time of year. Never know if I'm doing enough or if I've done too much. The pressure takes the joy out of the holiday.

Wow-- I was supposed to be cheering you up. Well, know you have a place here to unload.

The tot loved Legoland. She wants to go again, lol.

I've never been to Legoland... Is everything made from Legos? Like giant ones? Curious. :-)

Yep, nearly everything is made from legos--mostly the little ones...

The tot wants you to tell Anna thanks for her treasures, they're comming with us to AZ...

The money you're spending fixing your car you could've spent on a present for me. But I won't mention it.

Mario-- what a cruel twist of fate. And I HAD planned to spend that $1200 on a present for you-- a trip for one to Siberia. Ah--winter in Siberia. What an inspiration. Would fit your Latin temperament to a T.

Nice blog as for me. It would be great to read more about that matter. Thank you for sharing this material.
Sexy Lady
Asian escorts

Did Mario put you up to it?

Jeanne, I saw Avatar in IMAX today -- it was amazing!

Avator is on my to see list. Glad to hear you liked it!!!

BTW, where are you going in AZ?

We're in Tempe, my old stopping ground before I moved to LaLa Land.