Thursday, November 12, 2009
Blog-o-rama This week-- things that caught my eye in the paper.

Destruction of the Berlin Wall 20 years 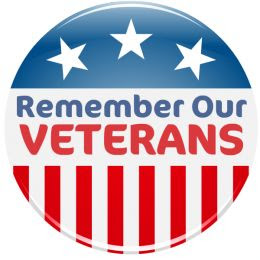 First though, I want to say thank you to all our vets (including Mario, btw), past and present. No matter your politics, it’s because of their sacrifices that we’re able to argue, condemn, extol or pontificate to our heart's desire.

Next up—Publisher’s Weekly chose their annual list of the year’s best books. In the top ten, there are NO women. Here’s the NYT take:

The trade publication Publishers Weekly probably wanted to provoke discussion with its annual list of the year’s best books, but not like this. In its issue of Nov. 2 Publishers Weekly compiled its PW Top 10, a decidedly subjective ranking of the best fiction and nonfiction published in 2009, including the biography “Cheever: A Life,” by Blake Bailey; the novel “Await Your Reply,” by Dan Chaon; and the graphic novel “Stitches,” by David Small. But as The Guardian reports, the ranking has drawn protests from a women’s literary group that notes there are no female writers on the list. Cate Marvin, a founder of the group Women in Letters and Literary Arts, told The Guardian, “The absence made me nearly speechless.” In her introduction to the year-end list Louisa Ermelino, the reviews director of Publishers Weekly, wrote, “We ignored gender and genre and who had the buzz.” She added, “It disturbed us when we were done that our list was all male.”

If you're curious what made it, go here for the list.

Already reeling under competition from chain bookstores and dot-coms, which can undercut their independent cousins by bulk buying and selling at much lower prices, locally owned bookstores are taking it on the chin even worse in today's struggling economy.

One of the best-known independents in the country, Denver's 35-year-old Tattered Cover Book Store, is taking a new tack — selling used books.

Although the store has never sold used books, general manager Matthew Miller said, "Our decision to carry used books was about 25 years in the making."

I mentioned Fight Club was one of Mario’s favorite movies (and books). Here’s perspective From Shelf Awareness and the NYT:

The film adaptation of Chuck Palahniuk's 1996 novel, Fight Club, "stirred vitriolic ire when it came out 10 years ago and today inspires obsessive, often worshipful scrutiny in both lowbrow and highbrow quarters," the New York Times observed in its examination of Fight Club's elevation to cult status.

Although the movie was a box office disaster, it has had a successful sales afterlife in DVD and book formats, and has even inspired a video game and a men's fashion line. Director David Fincher said that when he read the novel, "I thought, Who is this Chuck Palahniuk and how has he been intercepting all my inner monologues?"

Palahniuk called the film "the best date flick ever," the Times wrote, noting that the high-testosterone story has also found a substantial female audience: "The Fight Club generation is the first generation to whom sex and death seem synonymous, [Palhniuk] said, pointing out that the 'meet-cute' between the characters played by [Edward] Norton and Helena Bonham Carter occurs in a support group for the terminally ill. Having grown up with an awareness of AIDS, younger readers and viewers, he added, 'could identify with the implied marriage of sex and death; and once that fear was acknowledged those people could move forward and risk finding romantic love.'"

The secret to the enduring allure of “Fight Club” may be that it is, as Mr. Norton put it, quoting Mr. Fincher, “a serious film made by deeply unserious people.” In other words, a film as willing to take on profound questions as it is to laugh at and contradict itself: what is “Fight Club” if not the most fashionable commercial imaginable for anti-materialism? A movie of big ideas and abundant ambiguities, it can be read and reread in many ways…

IMHO, a half-naked, thirty-year-old Brad Pitt may have had something to do with it, too… 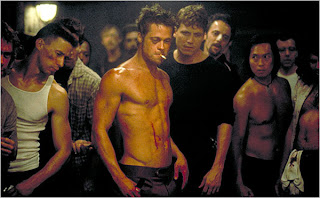 And something from the Daily Beast Blog that in a round about way has connections to Veterans Day, too

As the nation marks another Veterans Day with gays still barred from serving openly, Kaylie Jones, daughter of From Here to Eternity author James Jones, reveals that a major gay sex storyline was cut from her father’s famed novel. Plus, view the original manuscript.

This one caught my eye because it was Mario’s favorite news story for a while:

ORLANDO, Fla. (AP) -- A former astronaut who drove 1,000 miles from Houston to Orlando to mount a bizarre attack on a romantic rival pleaded guilty Tuesday to reduced charges and was sentenced to a year on probation. 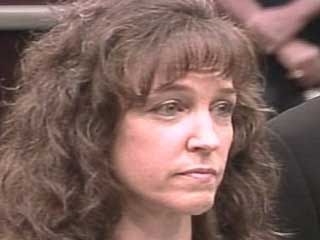 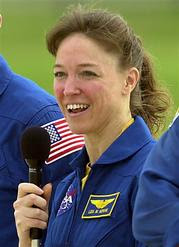 Lisa Novak before and after the debacle.

Huh? A year on probation? Her victim, Colleen Shipman, says she still fears Novak. Weird end to a weird story. The details here.

Spoof on Twilight courtesy of pal Mark Henry (who brought it to our attention) and You Tube.


Here’s the Tot on Halloween—Anna thinks she's the cutest Minnie Mouse there ever was! 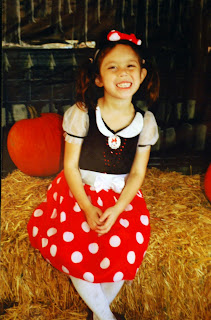 And because everyone loves a happy ending (especially when it involves puppies), here’s one to launch you on your way with a smile:

Ed Cray and two friends were camping recently in the White River National Forest near Glenwood Springs when they heard a dog barking.

Later, the dog wandered into their campsite. Seeing that she was very thin, the hunters fed her some of their leftover dinner. When she set off back into the woods, the Denver-area hunters worried about her and assumed she might have been abandoned.
The dog, whom they named Remy, came back later in their trip and led them to her den in the woods. Under a fallen tree were five, plump puppies.

Even though they didn’t take home any elk, Cray said it was a perfect hunting trip. He kept Remy and all five puppies have been adopted.


More, including a video, here.

So, back to work. Book Seven is coming along. I'm thinking of posting a little as I go as teasers. Any thoughts?  ¶ posted by Jeanne Stein @ 5:59 AM

Comments:
One year suspended sentence! I'm sure Lisa Nowak intended to feed Shipman to the gators.

You got that right!!! Are you hunkered down for the storm?

The Minnie Mouse tot is *adorable*

As for the book list, I think the women's group is being a little over sensitive. There might not be a woman in the top 10, but there are women in the "top books" list within specific genres. Plus it's not about who wrote the book, but how good the book supposedly is. Sometimes the list will have more women and sometimes it will have more men. That's just how it goes. I must admit though, I've only heard of a handful of these authors. I can count the ones I know on one hand. People might tell me that means I need to widen my literary horizons. (Apparently there are good writers that don't write Sci-fi/Fantasy!) but I can't seem to be bothered :p

Jeanne, wait ... so what's this about book seven? That happened to book six? Did I fall asleep for a little while? As far as teasers go, I'm all about that if you are game :)

Ok, well I had better head off. I've been swamped with grad school work and it's not about to let up anytime soon. I've been interviewing people who knew the author Josephina Niggli (she wrote Hispanic literature) and it has been incredibly fascinating.

I hope everyone has a lovely weekend. Cheers!

I have not always been a fan of lists and I know for a fact I won't be reading the ones on that particular PW list. I know the NYT lists make for awesome sales for authors and I do look at those, but don't buy my books or read books based on the lists.
This is just my humble ol' opinion.

Freak woman only gets a year probation....sigh....I hope there's some kind of restraining order out there on her.

Fight Club.....half naked Brad Pitt notwithstanding...the flick doesn't do it for me. Neither did Interview With A Vampire. Now Brad Pitt in Legends of the Fall....Oooooo yeah! I used to have the pic of him and his flowing hair in my target intel tool kit to keep my spirits up on long deployments....

Tot Minnie Mouse is too cute!!

Leia-- I'm the one who must be asleep. I'm working on book seven, but I really meant to say, maybe post a few teasers from book six, Chosen.

As for the list, I agree. this list is not genre (or anything) specific. And like you, I must admit to reading what I consider much more exciting, plot driven stories. I know there are good literary writers out there. I just have a hard time slogging through ten paragraphs of angst when one paragraph (or sentence in some cases) would do. MHO

Sounds like you're enjoying your grad school experience even if it does involve much work. Let's face it, anything worth it usually does.

Hi Vickie-- I am not a BIG fan of Brad Pitt but he is eye candy.

And thanks to you and your DH for your service to our country. I hope you hear that often. I know I'll never take what I have for granted. I'm just afraid too many do.

Actually, I think you should post your "preals" from book seven -- those little gems that come out of rough drafting. Just a sentance or two. It's a fun thing to do, we do it in the Paranormal online RWA chapter. I always like reading everyone's stuff.

I'm only at about 10k on my NaNo stuff, but I started Thursday, lol. I'm a little behind, but my proposal is done and off with the beta readers, lol.

I hope you're okay through all the weather. It's warm and sunny here. We'll send you some. :)

Have a great week.
~Suzanne and the tot

Jeanne, I never say no to teasers if they are offered up. Even if the author is half asleep and is talking about a book after the book that comes out next ;)

I too know that there are good "literary" writers out there, but I'm such a sucker for Sword & Sorcery and High Fantasy (formulaic as it can become)that it probably would not hurt me to broaden my horizons. However, almost every time I pick up a general fiction book on the best seller list I have a hard time getting into it. Part of that could be though that lots of general fiction deals with real life and every day problems. I don't mind reading about impending doom, but I'd rather it be because the world is about to end (again for the upteenth time) and can only be saved by one person who has a mysterious past, said person having no clue about their personal history and finding themselves inadvertently stumbling into apocalyptic disaster etc etc. If I want to experience real life problems I'll just live my life ... not read about it.

As for people who have given service to this country, I think too many people do take it for granted. We are all indebted to anyone who has served in the armed forces in any capacity (radio operator, technician, soldier, etc)