Wednesday, October 07, 2009
Ready This Time....I think Hey-- I think I'm back on track. Well, maybe. Anyway, got a few tidbits to share this week. And since Mario mentioned it, the retreat was wonderful. A few of us go to the Hand Hotel in Fairplay and spend the weekend with nothing on our minds but our work. The staff, especially Mike who is a cook beyond belief, goes out of its way to make us feel comfortable and at home. Susan Smith and I were saying it's like going to grandma's.

We all have our favorite rooms (mine is The Trapper), Mike feeds us like royalty, and we gather in the morning in the sun room to work with no distractions (except the ones we make when we break out in spontaneous conversation.) It renews body, mind and soul. I also met with local teacher Lynde Iozzo and a half dozen of her students to have coffee and talk about writing. I love doing that. This group is bright, funny and talented.

Monday's Art Walk was another treat. Mario didn't know I was going to make introductory remarks and for once, we really caught him by surprise. There was a photographer there to record the festivities so I'm hoping Mario will have pics to share. The one sour note, he had the audacity to let a stranger (at least she was a stranger to me) try on my gun bra! Now, I ask you, how rude was that! Here's the Westword on line blurb, but if you can get the printed copy, they ran a really nice article on Mario that included more pics of his art work, including the one I own, Norwood Apts. I told him if he tried to sell MY picture again, he was a dead man. I took it home with me when I left that night just to remove temptation.

The Nobel Prize in Literature was awarded today. From Time.com this morning:

The Swedish Academy, which has picked the winner annually since 1901, said Thursday that Müller "who with the concentration of poetry and the frankness of prose, depicts the landscape of the dispossessed."

The prize includes a 10 million kronor ($1.4 million) prize and will be handed out Dec. 10 in the Swedish capital.


A couple of weeks ago, Shelf Awareness posted this from The Literary Salon:

Literary Salon reported that Ladbrokes posted odds, but cautioned that "the Ladbrokes folk really don't take this seriously. Among the misspelled author-names are: 'Luis Goytisola' (surely they mean Juan Goytisolo), 'Antoni Tabucchi,' 'Umberto Ecco,' The Kindly Ones author 'Jonathan Little,' and 'Michael Tournier.' And, as every year, Ngũgĩ wa Thiong'o is listed under a name he hasn't published under in decades, James Ngugi." Top 10 betting favorites, "keeping Ladbrokes' (mis)spellings intact" include:


BTW, Ladbrokes is a UK betting operation. Don’t know what Herta Müller's odds were. The site is already down.


Dracula the Undead book trailer-- I picked up an ARC of this at ComicCon in July and am ashamed to say I haven't read it yet. But it's written by Dacre Stoker (yes, one of those Stokers) and Ian Holt. The book was written from plot threads and characters Bram Stoker compiled while writing and researching the original classic. It is scheduled for release Oct. 13, so if anyone of you get to it before me, tell me what you think. Here's the website for the book. You can always tell when an author has gotten a hefty advance by the quality of the website and trailer the publisher puts together, can't you?

I don't think I posted these links before. Here are pics from DragonCon including Steam Punk stuff that some of you were asking about. These were sent to me by Charlaine Harris' funny and warm assistant, Paula. The costume pics were taken by Keri Sauer, one of the Charlatons.

Something fun: A slide show of Towns That Need an NCIS.

A well-known Kensington editor, Kate Duffy, has died. From the New York Times:

Ms. Duffy died on Sept. 27, at 56 at her home in Manhattan. The cause was complications of uterine cancer, her brother, Benedict Duffy, said.

At her death, Ms. Duffy was an editorial director of the Kensington Publishing Group, a leading publisher of romance fiction. She was previously founding editor o Silhouette Books, originally a romance imprint of Simon & Shuster.

..Ms. Duffy is also widely credited with helping diversify a genre that had long depended crucially on “women with a peignoir and a candle,” as she told The Washington Post in 2006. Under her stewardship, writers were encouraged to produce romances that contained strong elements of mystery, screwball comedy, foreign intrigue or, in a wildly popular recent trend, the paranormal.

…On Wednesday, Ms. Wendell ( founder of Smart Bitches Trashy Books) recounted Ms. Duffy’s personal formula for a satisfying romance novel — of whatever stripe. “These two crazy kids are going to work it out,” Ms. Duffy often said. “Even if she’s a human and he’s a demon, those two kids are meant to be together.” 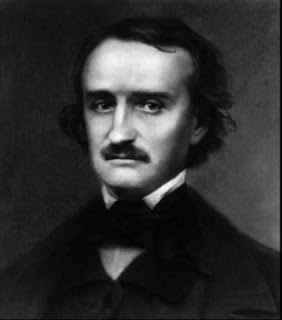 It's been a good 200th anniversary year for Edgar Allan Poe. The master of gothic horror has been celebrated at events in several cities to mark the bicentennial of his birth.

And on Sunday in Baltimore, he'll get the funeral he never had.

Because of intense interest, Baltimore will host two funerals. Each is expected to draw about 350 people to Westminster Hall, the former church adjacent to Poe's grave. Actors will portray Poe's friends and contemporaries as well as writers and artists who cited Poe as an influence.

The Poe House and Museum will also host a viewing of a replica of Poe's body on Wednesday.

Poe will be feted at birthday parties in five cities in January celebrating the 200th anniversary of his birth. 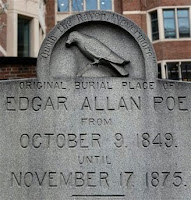 Jeff Jerome, curator of the Poe House and Museum looks over a replica of the body of Edgar Allan Poe, in Baltimore, Monday, Oct. 5, 2009.

For you writers out there. I've already ordered mine. 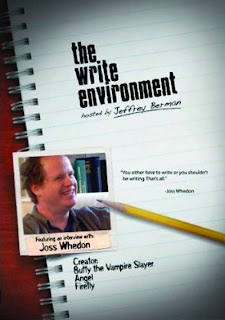 From RDRR Productions ! Writer/Director Joss Whedon is one of Hollywood’s hottest writers, having created one of television’s most critically praised series, Buffy the Vampire Slayer, as well as its hit spin-off, Angel. In this candid interview, this third-generation Emmy and Oscar nominated writer talks openly about the early days of his career, his legion of fans, and the trials and tribulations of taking a cult TV series to the big screen. The Write Environment is a compelling new series that takes us backstage into the here-to unseen world of the writer’s room for an intimate one-on-one interview with some of today’s most prolific writers. Scheduled to ship in January 2010.


I've probably taken up enough of your time. What's going on in your world?

I'll close with a thought-provoking video. Did You Know?

Glad Fairplay was such a wonderful retreat for you.

What's up in my world? I'm so frustrated w/ my book I'm thinking of changing it from a historical to an alternative-history-fantasy type thing just so I can get creative and stop getting bogged down in trying to get the setting right. I hate the book right now.

Other than that working and taking my aggression out @ the gym.

Hey Gina-- don't get too discouraged--I've been there and it's a wasted emotion! The gym is a good outlet, though.

Thanks for the Steampunk pics!
I'm so glad it's Friday. Things have been insane at work (it's my busy season and well they want to get all they can out of me before I leave, sigh) and the tot's feeling neglecting, so I think we'll do something special tomorrow (Huntington gardens maybe?) Have a great weekend!
~Suzanne and the tot

You have a good weekend, too, Suzanne. Have fun with the tot.