We’ve got lots of ground to cover but first—there’s something I’d like you to do—actually, two things. First, over at Bitten by Books they’re running a poll—favorite paranormal author for 2009. Believe it or not, I’ve been nominated. Here’s where I need your help. Click through on this link and vote. You have two votes, hopefully one will be for me. This is the last round and the deadline is Sunday. Here are the winners of the first three rounds:

Stiff competition, no? So go on. Click the link. Vote. I’ll wait….

Second short detour, for all of you who have wanted to see Felix and Anna get together, here’s your chance. Romance University asked us to do a he said/she said scene. Take a look and tell us what you think.

Okay, on to the real reason you stopped by:

Now that it’s pretty much been determined that the Balloon Boy story was a hoax, what else has been happening? There’s lots of Whedonverse goodies to share. 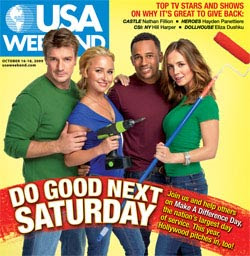 I caught the first one on Dollhouse. Full details here.

And ever wonder what comics Joss Whedon reads? The answer from Kirkmania:

In Joss Whedon we trust—his "Season Eight" of the comic book version of Buffy The Vampire Slayer has been nothing short of transcendent. So we asked the writer extraordinaire, "What comics do you still find the time to read in your ridiculously insane schedule ?" Turns out it’s a short list. Very short.

Upon this pedestal sits only The Walking Dead, the incredibly depressing and compelling zombie saga written by Image’s Robert Kirkman. "That is the only comic I still read—literally," reveals Whedon, who added that when he first picked up the book he "paced myself because it was deep into the trades by then and I only let myself buy one trade a week, for a few weeks before I broke down because it was my favorite soap opera."

So yeah, we could’ve left it there. But instead we called up Kirkman for his reaction. "That’s way awesome," says Kirkman who also adds, only half-jokingly we think, that he’d love to hear from the revered writer sometime. "I really respect Joss’s work and he’s done all kinds of fantastic stuff with Buffy and Angel and I love that Serenity movie. And I just bought Dollhouse on DVD. It’s really validating to know that someone whose work you admire is reading your work." 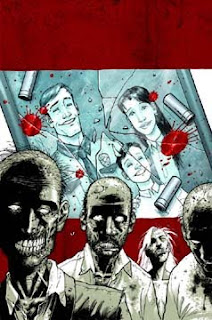 The Walking Dead is an American monthly black and white comic published by Image Comics beginning in 2003. The comic was created by writer Robert Kirkman and artist Tony Moore (replaced by Charlie Adlard from issue #7 onward, Moore continued to do the covers until issue #24) and chronicles the travels of a group of people trying to survive in a world stricken by a zombie apocalypse. A television series was announced to be in production on August 11, 2009.


And a very cool video for Dollhouse.

Comments:
Great entry, Jeanne. I am going to have to go back later to read the Anna/Felix scene. :)

I refuse to buy any books from Walmart, since I found out that they have a lot of pull with publishers on cover approval. They are NOT a bookstore, and given their penchant for censorship, I will not give them my money for books.

Great pic of James and Samantha's son, whose name escapes me at this moment.

And yes, Nathan Fillion at signings -- I'm there. :) My husband and I both love the show.

I already did -- the spouse is going to read it first. :)

Love the Anna/Felix scene.
Haven't managed to ctach Dollhouse or Castle (or Vampire Diaries) Sigh. The tot says "hi." From the tot files. Tot puts in fake vampire teeth from the pinanta, then hands them back to me. "Mommy, they're not sharp!" LOL
~Suzanne and the tot

First of all, Hello again after another logn absence. Grad school eat your time!

Second - I tried to vote for you but the webpage says that the comment form is closed :(

Third - CASTLE! I'm not sure if I will read the book but I'm curious to hear what other people think.

On a complete diferent sid note, the second season of Blood Ties (the cancelled vamp show based on Tanya Huff's Blood Books) was finally released a couple of weeks ago and I ACTUALLY SAW IT AT WALMART. No joke. Hardly anyone gave it the time of day when it was on the air, but now it is at Wally World. I had already ordered my copy online but that made me very happy inside to see that.

Jeanne: Thank you for the Spike fix and especially the link to the Charlaine Harris interview. It's so cool to finally hear her voice.

I voted for you and Kat Richardson yesterday.

I will get Richard Castle book when it comes out as MPB probably. I wish the show came on earlier or I'd get more time on Hulu so I could catch up. I'll ask DH for the first season for Christmas or birthday. As well as season 4 of Bones.

That is one cool 'he said/she said' between Felix and Anna.

Everyone would be wise to take Oprah's advice of signing your own checks.

I continue to do my best to purchase my books from the indie bookstores. I will go to B&N from time to time and Amazon occasionally.

Hey Leia-- I want to get Blood Ties, too. Can't believe it's in WalMart but I have a feeling we can thank True Blood for that, too.

Hey Vickie-- glad you enjoyed the post. Writing the Felix/Anna scene was really fun and after all the times Felix came sniffing after Anna, when they were finally together in the same room, he bailed on her! Guess we know why...he KNEW she'd be too much for him...

HA. Every time I read Anna's story, seems like SHE's the one who's bummed because she can't go with Felix.

As an avid reader, I was disturbed to say the least by the announcements from Walmart and Target that they were going to price books so low. Its not enough they've killed off all the little mom & pop stores...now they're going after everything else.

There isn't any place in the world I'd rather be than browsing titles in a bookstore. The smell of new books, the feel of the paper under my fingers, the quiet of so many people all looking for just the right story...sigh.

I, for one, don't give a sh*t how cheap the books are at those evil monstrosities, I'll still buy my books at a higher price at the local bookstore for the sheer enjoyment of being there.

unseelieme: I agree. I hope this lunacy is short-lived...

unseelieme, the low cost books were great for me when I bought the Twilight series b/c I saved a LOT of money on something I didn't plan to keep. For everything else though? I completely agree with you. When I want a book I will check on Amazon to see if it has been released yet, and then I go to the local bookstore and ask them to order it for me. I end up paying more (cover price) but it supports them. It's my way of contributing to their business and doing my small part to help them turn a profit and stay open so that I can be there twice a week.