Sunday, October 25, 2009
Costumes, a crazy man, and a timely dose of pharmaceuticals 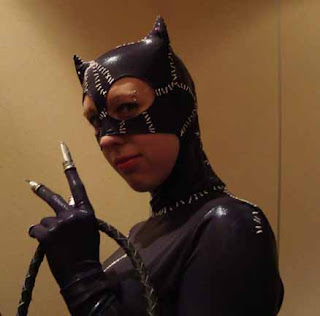 Mario here:
Well, it's over.  Another MileHiCon has come and gone.  It was a lot of fun meeting old friends, making new ones, and hobnobbing with the fans. Of course, we can't forget the awesome costumes and attitude.
Among the highlights, the panel Must Action/Adventure = Dumb/Mindness with the bemused Betsy Dornbusch and the expressive (and Locus Award winning) Paolo Bacigalupi.  (He's from southwest Colorado where people normally act like this.)

Paolo had much to celebrate.  He's next year's toastmaster and his much acclaimed debut sci-fi novel, The Windup Girl,  just hit the bookshelves. 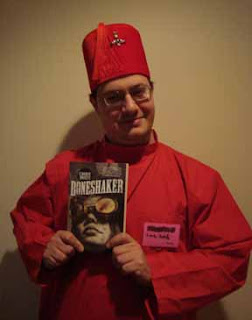 Steampunk was the prevailing theme with an amazing assortment of takes on the costumes. Jacob shows off his matching tarboosh and robe as he holds a copy of Cherie Priest's steampunk novel, Boneshaker.
If you love Steampunk, unbuckle your corset and wave your gloves.

One new acquaintance was Stuart Neville, who journeyed all the way from Northern Ireland to flog his new thriller, The Ghosts of Belfast.  What cultural wisdom did Stuart share?  That there is nothing sadder than an Irishman and his empty glass of beer. 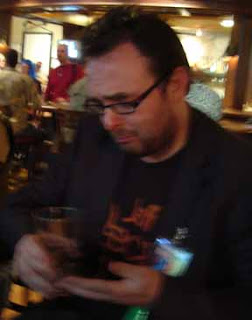 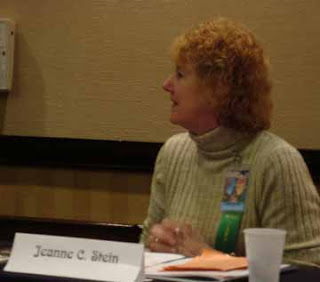 The look of frustration.  Jeanne was all set to proclaim Spike as the sexiest vampire of all
time.  Then another panelist beat her to the punch.  Jeanne did not take it gracefully.  I was about to hit 9-1-1 on the cell.  Here she is after we administered Valium.
A Winner!  Though none of us Biting-edgers attended Bouchercon last week, we can tell you that fellow mystery writer James O. Born won a Barry for his short story "The Drought." 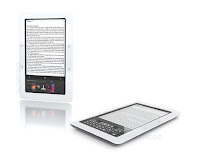 The Future? We've heard a lot about Amazon's Kindle reader.  Now Barnes & Noble is about to jump into the fight with their double-screen e-Reader, meaning a text screen on top of an iPhone touchscreen.
Any thoughts on e-book readers?  Luv' em?  Or are they the Devil's handmaiden?
¶ posted by Mario Acevedo @ 5:49 PM

Comments:
The pic Mario posted does not even begin to capture the shock, anger and frustration I felt when someone chose Spike before me! In case you have never participated in a challenge before, the idea is to pick the sexiest vampire and defend your choice against challenges. Now I had prepared and was ready to defend Spike against all comers....since I couldn't, I had to go with Angel and who was bested by Blade... Oh, the agony. But Spike won overall and I claimed partial victory!!!

We had a blast.

Hah! I thought you were going to leave and ditch this panel....

And it turned out to be the most fun of all.. go figure!

I had a few regrets leaving when I did but I went to the gym and watched the snow flutter down for an hour while doing my "hamster-on-its-wheel-to-nowhere" imitation.

Yay Spike!
{HUGS} Jeanne! I know your defense of the blond one would be outstanding.

e-readers....not crazy about them as I adore holding my books in my hand and having one at my bedside, one in my purse and if I had the e-reader, I'd leave that book in one place or the other.....I also love having all those books to look through and sift and see what I am in the mood for at any given time...and how would one get an e-book autographed?

Somebody had one author at MHC sign the cover of their ereader this weekend. So it's possible. Not sure how practical it is.

I've been meaning to get an ereader, it's just low on my list of priorities. I've seen people on the light rail with them and they look handy. My reason for liking them is that I go through a LOT of books, but I don't really like keeping them. I'm past that point in my life where I wanted a big comprehensive library -- now I want to simplify my bookshelves and keep only the really meaningful books. (this drive to just read it and get rid of it is also why I rarely ever seek out author signatures.)

So I give hundreds of books a year to the library, but I still feel like I'm wasting an awful lot of trees just to feed my book habit. It would be nice to read those things on an ereader and just delete the book when I'm done with it.

P.S. -- Another reason I like ereaders is it could potentially solve the problem of a book going out of print. It need never go out of circulation if its a downloadable.

Great pix, Mario! The action shot of Paulo is amazing, and the sad shot of Stuart has a kind of LSD feel to it. Not sure how you did that...

In a totally unrelated image, did anyone see Nathan Fillion in his "space cowboy" costume on Castle last night? Awesome!

Lesley-- I cannot believe I missed this. My TV somehow adjusted itself to the end of daylight savings time one week early! I didn't realize it until I went to play the episode!! Im hoping the network will have it available on line...

Blame congress, or whoever is monkeying around with DST timeframes. Your receiver must have shipped with hard-coded logic based on the way DST has been done over time. Just an unforeseen consequence of mixing up the start/stop dates lately.

Gina-- I wish they'd just leave the friggin' time alone-- it's already pitch black when I get up. When we set the clocks back, it will be even worse.

And how about this snow? Check out the pics I posted today.

Do you accept guess writer? Please comment me for the reply?

Hi Patrick -- i probably would if I'd been asked....or are you talking to Mario? We get confused here.

ah e-readers. You know I finally met someone that had a Kindle and she let me play around with it. I get the draw ... really. When I travel I have to haul a small bag for my books alone! Plus the e-books are cheaper than hardbacks (but more expensive than mass market) which is a big deal for those of us that die inside for a year an a half before books finally are released in mass market. That said though, I wasn't too impressed. I spend so much time staring at a computer screen that sometimes I just want to curl up with a book made of paper and get away from all teh technology. Plus, can you imagine paying all that money for e-books and a reader and then try reading it in the tub or at the pool? Didn't think so. If you drop a paper book in the water (only happened once in my life) you are out maybe 8 dollars. Even then, though, the book can be salvaged and is still readable (even if it isn't exactly in ideal shape.) If you drop a reader in the water you are out sooooooo much more. They are fun novelty and would be good for business people who are always traveling and need a good way to transport books without taking up a lot of room. For everyone else? Just go out and buy the real thing made of paper.