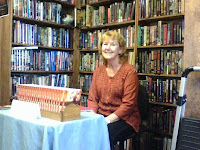 Mario here:
Big kudos to Jeanne for breaking the seal at the new Broadway Book Mall with her signing of Retribution.  As usual, Ron and Nina Else proved to be the gracious hosts and provided great chocolate treats.  We're waiting for the second printing, Jeanne!

If you look to the right side of this page, you'll see links to many fabulous paranormal blogs. 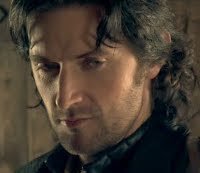 One cool site to visit is Midnight Moon Cafe and their current blog features one of Jeanne's favorite distractions: hunks!  Such as Richard Armitage.
Jeanne said this last week but I'll repeat it anyway.  Joss Whedon won an Emmy
for Dr. Horrible Sing-A-Long blog.

I'm always amazed by the creativity of entrepreneurs, such as the folks at Gimme Gimme Pillow Toast, a local outlet for super-cool and wacky Asian !PoP! goods.  This Saturday (Sept 26), they're hosting a Webstore KICK-OFF and Retail location closing PARTY!  How's that for making lemon drop martinis from lemons?  They laugh in the face of this recession (and step on the creepy pink furry).

THEN on Monday, October 5, I'm the featured artist at the First Monday Art Talk.  Check out the scene at Dazzle Jazz Club, 950 Lincoln, Denver.  The event is FREE, and includes free appetizers, drink specials, music, poetry-- you'll feel like one of the artistic elite.

SPOILER ALERT!
I saw the new Robin Williams' movie, World's Greatest Dad.  The story is about a frustrated writer who turns tragedy into a golden opportunity to get everything he wanted.
Here goes:
Robin Williams plays Lance Clayton, a high school English teacher and frustrated writer. His son is the insufferable Kyle, a foul-mouthed, porn-obsessed, cynical teenager who is loathed by everyone (for good reason).  One night, Lance finds Kyle dead, the result of autoerotic asphyxiation.  Lance alters the death scene to make it look like a deliberate hanging and pens Kyle's suicide note.  The suicide note is found in the police report and reprinted in the media.  Everyone is astounded by Kyle's profundity.  Suddenly, loser Kyle becomes a cult hero-martyr.  Lance then fakes Kyle's journal and the book brings Lance fame and the promise of great fortune.  He is booked on an Oprah-like talk show.  A Hollywood agent follows Lance back home, with three editors of major publishing houses in tow.  Just as he's on the cusp of getting everything he's wanted, Lance recants in front of everyone, runs away, strips naked and dives into the school swimming pool.
I wanted to really like the movie and I think knowing too much beforehand dimmed my appreciation.  I did enjoy how this was one of the few movies that accurately showed the writer's lonely and stumbling journey.  There's a great scene when Lance burns with humiliation and jealousy after a fellow teacher on the first try gets a short story published in the New Yorker. However, I figured part of Lance's frustration as a writer was that he wrote alone and never workshopped his manuscripts or met with a critique group.  People kept telling him how good a writer he was, but what did they know?  What really bugged me was the ending: it seemed too Hollywood (and the script came from that comic iconoclast Bobcat Goldthwait).  Lance breaks from guilt and unmasks his own fraud.  Huh?   Remember James Frey and A Million Little Pieces?  Frey didn't come clean until he and his publisher were pinned to the mat.  A flood of money will cause you to rationalize a whole lot of things and World's Greatest Dad would've been funnier and even darker if Lance would've stuck to his lie.
Another important spoiler ALERT.  Way too much Robin Williams paunchy middle-aged nudity to include an underwater wanger shot.  You have been warned.
¶ posted by Mario Acevedo @ 4:53 PM

Comments:
Okay, Mario-- two things-- you couldn't have used a more dorky pic of me from the signing-- you did that on purpose, didn't you? Remember, payback is a bitch...

Secondly, you obviously didn't read MY blog entry for last week. I already announced that Dr. Horrible won an Emmy.

True about the Emmy but I said it better.

I did ask you to sit for a nice picture but no....

It was very nice meeting you on Saturday and Lady K thinks you are hot. You have a 6 year old fan who knows your book covers.

Hey Jeanne and the BuffyBuds:

Sarah Michelle Prinze, nee Gellar, has given birth to a baby girl!

What do you think -- play dates for Buffy and Willow's babies in the future?

Gina: I am very happy for the Prinze fam. You know that is one cuuuuuute baby!

Hey Gina and Vickie-- I'm posting this today on the blog, too--

I really love motvation stuff like World's Greatest Dad.,they give you sense of purpose and motivation.