Wednesday, August 12, 2009
Thursday--er--Wednesday I know I’m a day ahead of schedule, but as I mentioned last week, Mario and I are off to Austin tomorrow morning. Now last night at critique, Mario said he was going to get some of those miniature bottles of liquor to take on the plane so we didn’t have to spend drink money. It seemed logical at the time until I realized our flight is at 9 AM.

Anyway, we'll be at ArmadilloCon this weekend--staying at the Doubletree on Friday and Saturday. Give us a call if you're in the area. And stop by to say hello if you're attending.

Okay—a few more postcards. Now I’m not really showing you these in the order in which they were taken. Just thought I’d share a little more of the beauty we take for granted in this country.

Outside of Arches Nat’l Park. This is an actual homestead. We should never, ever complain about our quality of life. A family of SIX lived in this one room cabin. 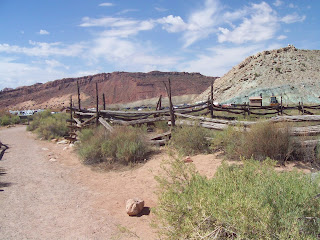 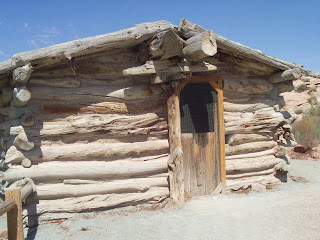 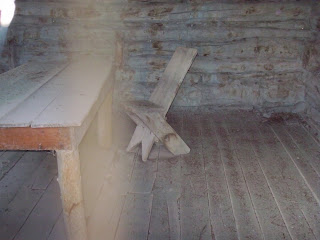 They did have a beautiful view, though. That is assuming they were not too busy trying to survive to enjoy it. 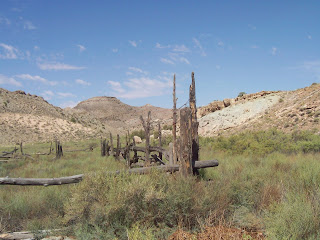 Arches itself—and the park signs that explain what you’re looking at and how an arch is formed. 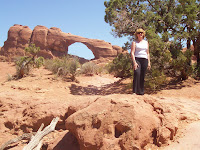 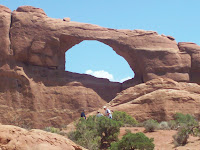 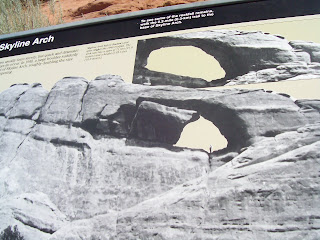 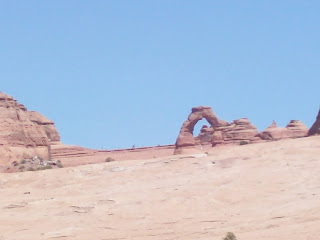 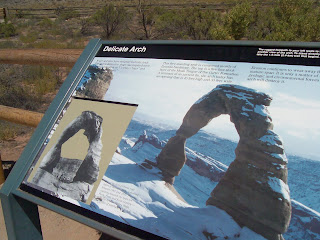 On to book stuff—Bitten by Books is conducting another one of those polls. This time it’s what August releases you’re looking forward to. Retribution is one of them. You can vote for three, so come on, mine should make it in there somewhere. 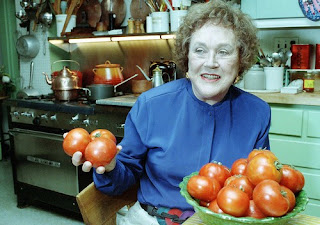 Not a movie (or book) I’d normally be interested in (no gratuitous sex or violence in the movie, I suspect, and I don't cook) but from the LA Times:

Ellen Bloom of Los Angeles never owned a Julia Child cookbook and always thought the famed chef's recipes would be just too difficult for an amateur like her to master.

But after seeing the movie "Julie & Julia" at the Grove last week, she rushed to the nearest Barnes & Noble bookstore to pick up the first volume of Child's classic "Mastering the Art of French Cooking." She noticed other people from the screening had the same idea.

I’m curious, have any of you seen the movie? Are you tempted to try cooking a la Child’s? If you have tried a recipe or two, how did it work out for you?

Joss Whedon’s musical miniseries "Dr. Horrible’s Sing-Along Blog" broke new ground with filmmaking for online audiences and earned the "Buffy the Vampire Slayer" creator and his cast a lot of new fans, but with any success story like "Dr. Horrible," the question now becomes : what’s next ?

MTV News recently caught up with Whedon and posed that very same question, and if we’re understanding the fan-favorite creator correctly, it sounds like there could not only be more "Dr. Horrible" on the way, but they already have a story in mind for the sequel.

"We’re in there plugging. The writers are trying to put something together," Whedon told MTV News. "We haven’t even decided on a venue. We have a story and we’re working that. We’re just starting with that."

While he couldn’t share any details about the aforementioned story for the "Dr. Horrible" sequel, how it will relate to the first miniseries or who will be returning (though we’re keeping fingers crossed for Nathan Fillion and Neil Patrick Harris to reprise their roles), Whedon indicated that the lack of information was more due to the early stage of development than anything else.

"Doesn’t matter if it’s big or small, [we’re just] just figuring out the story," he explained. "We’re really excited about what it is. More, I cannot say."

With both Fillion and Harris juggling lead roles in television series ("Castle" and "How I Met Your Mother," respectively), the duo will likely have to make room in busy schedules for a "Dr. Horrible" sequel — but it’s a good bet they’ll find some time. There’s also the lingering question about what form the next installment of "Dr. Horrible" will take, as Whedon has said in the past that he’s not sure whether the multi-episode miniseries format is best for online audiences, or if a one-shot movie is the way to go.

I of course will keep you updated.

I loved this. From TMZ and The Times:

California attorney J. Craig Williams says he will file a copyright infringement suit on behalf of his client Jordan Scott against Hachette Book Group and Stephenie Meyer, alleging that her bestselling BREAKING DAWN copies from Scott's 2006 book THE NOCTURNE.

Williams sent HBG a "cease and desist" letter on July 13 that just happened to land on TMZ.com. In the letter, which says it is responding to correspondence from HBG general counsel Carol Fein Ross from last December, he asks the publisher to "compensate my client for her damages." Yet Williams "said Scott does not plan to seek monetary damages," to the AP.

By all indications NOCTURNE was barely published. An ISBN search shows no presence for the book aside from an ebook download made available earlier this month. (The copyright page says it is a Griffon Book from the UK's Blackthorne Publications; there is virtually no information on the company on the internet either.)

The Times: The Times also noted that "representatives from Hachette called the accusation 'meritless,' according to Reuters, adding that Ms. Meyers didn't know about The Nocturne and that the Twilight Saga was her work entirely. Ms. Scott plans to file a copyright infringement lawsuit in U.S. Federal Court in the coming weeks, Mr. Williams said, though she does not plan to seek monetary damages."

Hmmm.. I see similarities between my books and the Twilight series, too—vampires, werewolves, sex (er—no, drop that). Where’s my lawyer’s number?

While I was reading the Times article, I saw this:

On Tuesday, Summit Entertainment, which produces the “Twilight” movies based on Stephenie Meyer’s bestselling teen-vampire-romance novels, announced that it had cast Bryce Dallas Howard to replace Rachelle Lefevre in the role of the bloodsucker Victoria. Ms. Lefevre, the studio said, would be unable to appear in “Eclipse,” the third film in the series, due to — you guessed it — scheduling conflicts.

The news was surprising to many resolute “Twilight” fans, including, apparently, Ms. Lefevre.

In a statement reported by The Associated Press, Ms. Lefevre said that she was “stunned” and “hurt deeply” by the casting change, and unaware that she was to be replaced by Ms. Howard.

Again I say Hmmmm.. wonder who wanted Lefevre out?

And now, to put everything in perspective:

Okay, off to pack. I’m bringing my camera on board the plane tomorrow to catch Mario imbibing. Let’s hope he doesn’t get us thown off the plane.

PS My friend Kris Bochum is sending me a lot of ComicCon pics so when I get them, I’ll sprinkle a few here and there.  ¶ posted by Jeanne Stein @ 8:45 AM

Comments:
I have been waiting for Retribution since the end of your last book...I thought it was never going to get out!!!

How many lawsuits does that make for Meyer now? Has anyone kept a tally?

P.S. Since when can you bring your own beverages on the plane?? I wish I would have known about this sooner!

thanks, CLJ. I hope you like it-- and trust Mario to know about the bottles on the plane thing. I do believe, though, it can only be what you can fit in a baggie! Hope he realizes that, too, or there will be some smiling security agents at the end of their shifts.

Before I forget, DH said he will take me and Lady K to the book signing at WhoElse Books on 19 Sept. YAY! Thanks for sending the schedule, chickie!
Have fun with Mario. I'd love to be in Austin this weekend.
I still won't read any more of the Twilight series or see any of the movies. I like more action and oomph and less angst in my paranormal. You, Mario, Jeaniene, Richelle, Jim, Rachel, etc will always be on the WWBL and Mt Git'r'Read.

Look forward to seeing you, Vickie!! And Lady K.