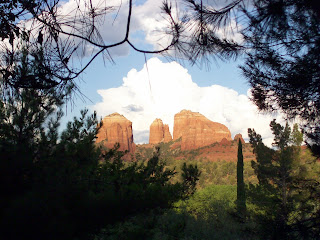 I’m writing this from one of my favorite places on earth—Cathedral Rock Lodge in Sedona. Back another lifetime ago, my husband and I and our best friend and his partner used to come here to celebrate New Years. The owner, Carol, was accustomed to closing the place for a family gathering but after our first stay, we became part of the extended family and invited to stay.

Times change. Carol retired, my friend’s partner died, life sent us on different journeys. This is the first time I’ve been back here in fourteen years. My friend and I drove from San Diego on a nostalgic trip and after the craziness of Comic Con, it’s a wonderful way to decompress.

We are the only ones here. This beautiful lodge is empty. The economy accounts for some of it. But I can’t help thinking Carol’s absence accounts for most of it. She was the soul of this place and while the scenery is still magnificent, her absence is felt. Or maybe it’s the ghost of all those New Year’s celebrations in the past where four people who loved each other toasted a coming year and promised to be together forever.

I hate growing up. 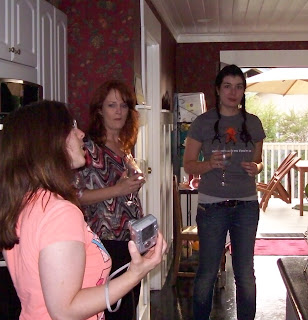 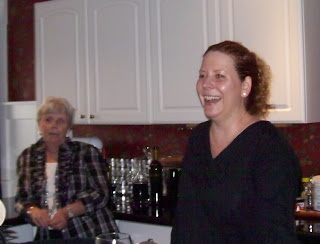 Speaking of Samantha, she hosted a dinner in her beautiful home with her terrific husband and kid (Max, whose Spike duster I SO covet) and parents. The food was superb, the wine excellent, the conversation ranged from raunchy to ridiculous and we had a blast. The best thing was that we were away from the crowds for a few precious hours. There is a frenetic energy about Comic Con that drains the life from we introverts. 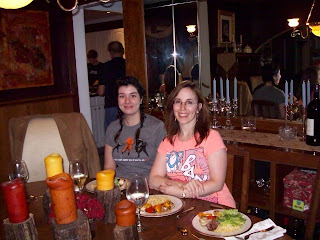 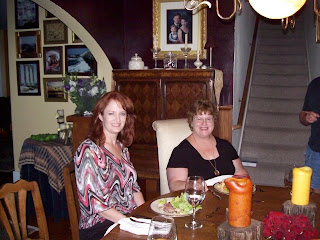 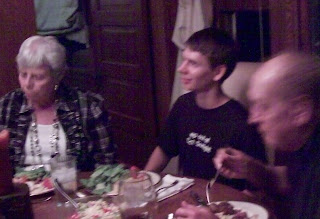 Sam's parents and son
If you're interested, I’ll post pictures later of sights from Comic Con. My good friend Kris Bochum took LOTS and is sending me a disk. The costumes alone are worth the price of admission.

And I did get an autographed copy of the Writer featuring Joss Whedon. Once again, Kris with her Whedon lottery record in tact, was one of the lucky few who got to meet him. She was kind enough to have him sign something for me, too. I didn’t make any of his panels, though. I think my days of standing in line for two or three or four hours to get into an auditorium are over, much as I love the guy.

Here are a couple of photos sent by one panel member, Dacre Stoker (yes, of those Stoker's). the Panel title was: Bram Stoker: Was he the Joss Whedon of His Time? Good panel, good audience, great subject. Thanks, Maryelizabeth Hart for organizing it. Also, the links I provided are to the authors’ blogs so if you so choose, you can connect and read their Comic Con entries which I’m sure will be far more informative then mine.

Another interesting note: people walking around the Con with “Twilight ruined Comic Con” signs. Don’t really know what it meant, but found it intriguing.

I did meet a couple of authors for the first time, though and that was a pleasure. Rob Thurman (who is a—gasp—woman), Amber Benson at a Borders’ Signing (yes, that Amber Benson), and J. F. Lewis. More on the panel and signing at a later date.

Book Six is off to the editor. I had a breakfast meeting with Jessica Wade (editor extraordinaire) and we’re on track for the release of Retribution, though why the cover isn’t up on Amazon and Barnes & Noble seems to be a mystery. I hope you like this book. I think it’s pretty good, though the next, Chosen, should (hopefully) knock your socks off. I can’t believe I’m saying this because hyperbole about my own writing is NOT in my nature.

PS Did just find out that Retribution is a RT Book Reviewers Mag Top Pick for September!!! WhooHoo...

“After a wild weekend of turning tricks at Comic Con, Perk and Taffy rounded up their friend, Scooter, and pointed the pimp mobile east for the wild town of Yuma Arizona. Taffy allow her long, flaxen bleached blonde mane to fall gently around her ample yet youthful boosum. Scooter made her presence known by laying across Taffy’s silken white legs…the car vibrating beneath her hot, jock buttocks. Meanwhile Perk rode herd on the surging Mitsubishi…a car called “Endeavor” for reasons unknown.”

And I think I have a vivid imagination!

Comments:
Taffy Magnolia? You? How about Necco Wafers instead?

I have forwarded the website of Cathedral Rock Lodge to DH for a future vacation site. I have only seen Sedona in pictures and on TV, but I am ready to see it real life.

What a fun gathering for you! I am glad you had a respite from the crowds. Sorry you didn't get to meet Joss. I wonder what that must feel like to know that people are willing to stand in line for hours to listen to a panel one is on.
I am in awe of you hangin' with Charlaine Harris.
Did you get a pic of Sam and the Spike duster?
Definitely post all pics you can from the Con. Pretty please.

I was at Amazon yesterday, and the Retribution cover was up. Well, in my Wishlist section - didn't check the rest of the site at large ;-)

Thanks for letting my know, Tez-- I just checked and yes, it finally got posted. At last!!

I took a pic of Max in his duster and it didn't come out for some reason. Probably has to do with me not knowing how to work the damn camera. I'll see him at D*C, though, so I can take another.

So would that make me "Aslan Twin Pine" or just "Aslan Pine"? Not very catchy.

@ Jeanne - Wow sounds amazing! I wish I could have been in on that Stoker panel that would have been an interesting discussion. Also you are a lucky duck having a chance to meet Amber Benson. She seems like such a sweet person.

I look forward to see pictures of the ComiCon cosplayers. That is without fail the best part of any Con recap :)

@ Tez- You beat me to it, I did see the cover on Amazon last night and was going to pass on the word :)

Ok, about Twilight and the "Twilight ruined Comic Con" signs. I am not surprised given the vast amounts of negativity directed at Twilight and its fans that emanates from the geek world. A significant percentage Con attendees are fiercely protective of what their ideal of Comic Con is, and I can guarantee that it does not include hordes of Twihards descending upon the event. A good number probably feel that Comic Con is selling out by including Twilight at all. Also, given the differences between Twihards (or whatever name they settled on) and the general Con audience; I'd say a significant portion of regulars feel as if their annual cultural sanctuary has been violated. To them it would be a bit like going to an Iron Maiden concert to find that Backstreet Boys was the opening act. Whether this feeling is justified or not is a different story, but I wager that pretty much sums it up.

@ Jeanne - also I wanted to add that I'm happy to hear that you ae so jazzed up about the next upcoming book. I love to hear that people are excited about something they are creating, because that means that they are really putting thier heart into it. That said, I've been looking forward to the next *few* books ever since the interesting conversation we had about Frey and a couple other characters not too long ago. ;)

Oh! and I just realized that Samantha Sommersby's son is wearing a "Keep Out Of Direct Sunlight" t-shirt :D I love seeing that people shop at Think Geek. that is without fail one of my favorite t-shirts of all time.

What do you do if you lived on many different streets as a child? I'd moved 6 times by my 6th birthday and attended 11 different elementary schools. Ahhh, the life of a brat...military brat that is.

Belle Rose. Sounds lovely and tender, like a virginal doe being led unsuspecting into a snare of hedonistic lust. A mysterious stranger invites her in to inspect his...

Excuse me. I need to go give my mind a cold shower...

P.S. It was either Belle Rose or Belle Craig or Belle East 15th Street. Or Belle Artillery Way.

Now you see why I picked Belle Rose.

Though Belle Big Guns might work. or Bombshell Belle.

Gina, I'm quite fond of "Belle Artillery Way" myself ;)

what about your first hamster? That was my first pet.

Leia: Thanks for the cranium's up on ThinkGeek site. Added to my favorites this second! = )

@ Vickie - you're welcome! It is a great site and I've ordered off there a number of times. I will have it known that while I do own the men's ("unisex") version of the "Keep Out Of Direct Sunlight" T-shirt I will soon be investing in the *new* women's version. Thanks to TG for listening to the female geek pleas and finally turning it into a ladies top. Even if you don't buy anything from there, surfing the site is worth it just for the item descriptions!

@Leia: But I'm really falling in love with Bombshell Belle. It sounds -- mysterious.

Rules are for suckers...

Gina and Leia -- you guys are having too much fun with the name thing! I must say, Bombshell Belle does have a certain ring to it.

Vickie-- I, too, am going to check out the thinkgeek site. I really liked Max's tee.

@ Gina - Well if you're gonna throw the old "Rules were made to be broken" thing ... *sigh* People never learn.

@ Jeanne - it IS a pretty awesome shirt. The people at the local bookstore call it my vampire shirt.

If any of you are Mythbusters fans you should go back and watch the last two seasons of the show. I've spotted Adam Savage wearing it atleast five times in the past two years. That always makes my day.

Hi Jeanne,
Wish I'd known you were in Sedona, I'd have come down to toast you!

Hi Shannon-- we played the trip by ear so I really didn't know where we were going to end up each day until we got there. I also wanted to stop by the Well Read Coyote bookshop but it was after closing when we got in and we had to leave before 10 the next morning. Next time, we'll plan ahead.

See you at the Gold conference, right?

Hi Jeanne,
I wasn't chastising you. I know how it is on the road--you never have time to do everything you want to do! I love the Well Read Coyote. I will definitely be in Denver for the conference--lets curse and drink.

Curse and drink-- two of my favorite past times!!!

I was playing games online however for reading this post more interesting thanks for the share please do keep it going great job....Loveing this.