Happy Independence day and a Happy Fourth of July!

We're starting our summer contest today. Why today? Because nothing says Dumbass like the revelry of July 4th combined with the temptation of fireworks. At least to me. 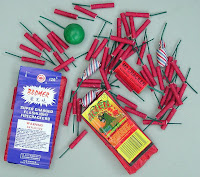 But first, the prizes: 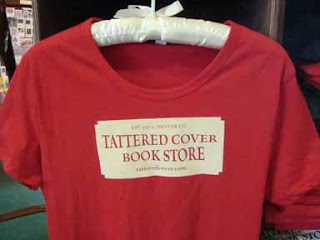 A T-shirt from the Tattered Cover bookstore in Devil Duck red. And a Devil Duck, of course. Plus shwag (Check back on Thursday for those pics).

The contest, in 75 words or less: Man, was I dumbass! Post your submission as a comment. The contest will be judged by our panel of crack contest judges in India. (Yes, in order to reduce costs, Biting-Edge has off-shored our contest judging.) Submissions will be graded on originality, spelling, and of course, the all important dumbassness. Contest decision will be final and not subject to appeal or bribery or complaining. Contest ends Midnight, Thursday, July 16, 2009.

As a young man, I loved explosions. Firecrackers were fun but I wanted the challenge of making a bigger boom, as in a bomb. I ordered a book which showed how to make all kinds of devices such as silencers, rockets, and bombs. I gathered explosive powder made of matchheads and from cheap Mexican firecrackers. The book suggested a detonator made with a cartridge and a spring contraption. I didn't have the suggested bullet so I substituted a much smaller .22. The spring contraption wouldn't set off the cartridge so I used a hammer to beat on the primer of the .22. Finally, on the third whack, the cartridge went off, shot backwards out of the detonator, and made the hammer sting my hand. But the bomb hadn't gone off. Well then, let's try it again. At that point, just before I struck a fresh cartridge, with the bomb attached to a wooden board that I was kneeling on, I realized that maybe this wasn't such a good idea. So I dismantled the bomb and waited until I was in army before I blew things up. 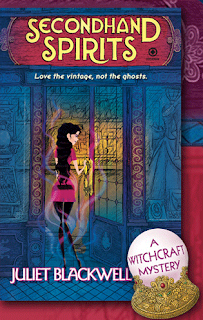 Witches on the loose. Juliet Blackwell, known to us by her other pen name, Hailey Lind, has a forthcoming book, Secondhand Spirits, about a naughty witch in San Francisco. Check out Juliet's blog on Pensfatales.com

Our favorite real life P.I.s , Guns, Gams, and Gumshoes is holding an "open house party" the first week of July--post a comment July 1-7, and you're eligible to win books from Colleen Collins's backlist, cool "Writing PIs in Novels" T-shirts, and other giveaways!

Vampiri in Italia. My latest Lego vampire movie was featured on this Italian blog. 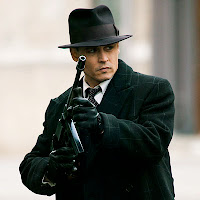 Saw Public Enemies. Very stylish. People were so fashionable back then, especially the killers and their molls. Johnnie Depp does a great job acting in a role other than a looney pirate or fantasy candy maker. Christian Bale likewise pulled off playing a straight-laced G-man without making me think he was Batman in civilian clothes.

Then there was Transformers that a friend wanted to see. The movie started okay but got beyond stupid after the first half hour. Unless you suffer from advanced ADD, then save your money.  ¶ posted by Mario Acevedo @ 1:22 PM

Comments:
Ha! And here I thought you joined the army to score chicks ;-) (Men in uniform, you see...)

Hey Mario, wasn't sure where to enter your Dumbass contest, but then my only story is my cousin's firecracker DA story (he was smoking a cigarette while lighting a firecracker in his other hand...he forgot which hand was holding what and threw his cigarette really, really far...fortunately, the firecracker he was holding went off without hurting him).

Good luck on your contest, hope you had a great fourth, and thanks for plugging Guns, Gams, and Gumshoes open house!

I have a few inquiries concerning this contest:

1: Can I enter even though I won the last one?

2: Do I even have a Devil Red's chance of winning, since I won the last one?

4: Can the Dumb-Ass moment not involve fireworks or the 4th of July?

I only ask because well I really can't think of any dumb-ass thing I've done but I can ask my Wife who's been cataloging them in these really nifty Bonded Leather Volumes. I think she's up to Vol. XXV.

Thanks and Cheers to everyone!

What a bunch of sensible wimps! It's been 4 days already and only 1 person put down anything dumber than Mario? I got no shame and plenty of contest-gall, so here goes:

"Stupid-drunk me's driving crazy down Speer when two rednecks pass me, throw a finger or say something (or maybe nothing). I chase 'em for blocks til they hit a stoplight. I get out, pull the passenger halfway out his window, pummel his visage. Dumbass me (!) forgets the driver who uses a small bat to hit a home run with my face, leaving me staring through broken glasses at his license plate as they flee--fortunately!"

Okay, this is my dumbass (and also most humiliating) moment. It was a few summers ago. I was hanging outside scoring a nice tan in shorts & a bikini top. My husband & I wandered over to the neighbor's fence to say hi. Now, I have to inject here that our neighborhood is wide open. The residents of at least six houses can see in my back yard because I live in a freaking fishbowl.
Anyway, as I'm standing there talking I feel a tickling sensation on my shoulder, heading down my front. I look down & there's a huge daddy longlegs making its way along the edge of my bathing suit.
So I hate spiders!(Yes, I know they're not spiders but they f-ing look like them.)
I let out a shriek that would rival any zombie flick victim and swat at it. This draws the attention of not just the couple I'm talking to, but other neighbors in nearby yards. Of course, the damn thing drops right inside my cleavage and endeavors to crawl between my top & my right breast.
You know what's coming, right?
I began a campaign of loud screaming (insuring everyone's full attention) & ripped my top off, jumping about & swatting at my now bare breasts.
Yes, I flashed the entire neighborhood.
When I realized what I'd done, I calmly put my top back on & slugged my husband (who was staring at me wide eyed & stunned). Then I excused myself & went inside.
I think that tops your moment.

I doubt all of the males (and possibly others) would have called that dumb.

But then, I'm not the judge, outsourced or otherwise.

Thanks for the imagery though,
RudyG

Good stuff. AtticusRex, yes, you may enter again. We can get the t-shirt in all sizes.

4th grade...a kid in class dared me to stick an art gum eraser up my nose...dumbass me..who couldn't seem to say no to a dare...did this dumbass thing. Stuck the art gum eraser up my nose. It stuck...I started crying...you know what you do when you start crying..you start sniffling too. That art gum eraser kept going on up the shnozz. Had to go to the emergency room and have that effin' thing yanked out with forceps. To this day, I can't go down the row of art supplies that includes art gum erasers....I pray Lady K does not inherit that dumbass gene.

I would like to say this happened when I kid but...

I've always wonder if your tongue really sticks to cold metal, guess what...it really does. One the kids stuck there ice cream back in the freeze with a spoon in it. I was just going to take the spoon out, really, but it had ice cream still on it. Popped that sucker on my tongue and it wouldn't let go! Only ripped on the top layer of the tip of my tongue though. Lesson learned, warm up the spoon first. Hey, I'm not throwing away a perfectly good bite of ice cream.

I was waiting for water to boil and decided to lie down for a second since I was feeling tired. I fell asleep till my mother started shrieking. I’d left the saucepan on so long that the water had evaporated and the stainless steel pot was melting and dripping into the heating element. You’d think I’d learned but years later, I did something similar but managed to catch it before the pot started to melt.