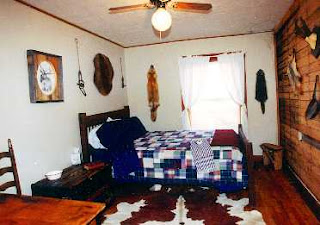 Why, you ask? Because I am SO looking forward to this weekend—I’m off with pal Susan Smith to Fairplay for a writers’ retreat. Goal—finish first draft of my sixth book: Retribution. Three days of nothing to think about except writing. The manager of the place (The Hand Hotel) cooks breakfast for us, puts out wine and goodies in the afternoon and prepares dinners to die for. I always get the same room and though I was at first leery of a room called "Trapper", it's the best. The hotel is charming, warm and has wireless! What more does anyone need?

On one of my loops someone posted a question about a rumor Charlaine Harris may make an appearance on True Blood. Her reply: It's a possibility, depending on timing and a lot of other things.

How cool would that be? 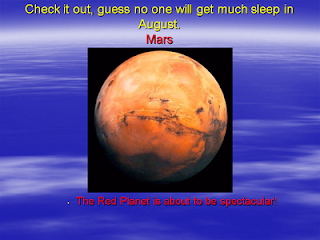 I imagine by now you’ve seen this pic of Mars looking as big as the moon with the caption that on August 27, the closest encounter between Mars and the Earth will occur.
A once in a lifetime event. Unfortunately, this 'once in a lifetime event' already came and went. In 2003. Another of those urban legends you love to hate -- what are your favorites?

Talked a few weeks ago about movie remakes. Here’s your chance to vote on who you’d like to see as the new Lara Croft. Candidates are:

What do you think?

J.D. Salinger Tries to Block 'Sequel' to 'Catcher in the Rye'
By ROBERT KAHN

(CN) - Reclusive author J.D. Salinger claims a man writing under the name of J.D. California is about to publish an unauthorized sequel of "The Catcher in the Rye," violating Salinger's copyright in the novel and its main character, Holden Caulfield. Salinger also sued London-based Windupbird Publishing, Sweden-based Nicotext, and SCB Distributors, of Gardena, Calif. Salinger calls the new book "a rip-off pure and simple."

Salinger says the cover of the new book describes it as a "sequel to one of our most beloved classics."

His complaint in Manhattan Federal Court continues: "The sequel's author, 'J.D. California,' explains that 'Just like the first novel, he leaves, but this time he's not at a prep school, he's at a retirement home in upstate New York. ... It's pretty much like the first book in that he roams around the city, inside himself and his past.'"

One other book tidbit—Janet Evanovich and her daughter are working on a graphic novel for Dark Horse Comics based on the “Metro Girl” series about a NASCAR race driver.

Ever heard of a BBC program called Being Human? From a BBC website:

..Being Human is about George, Mitchell and Annie, three seemingly normal flatmates struggling to keep their dark secrets from the world, and follows their struggle to fight both their curses and the enemies who want to bring them down.

Screener Elaine Bergstrom on LitVamp has this to say:

…it has an odd premise that just may appeal to Buffy fans. A vampire and a werewolf are roomies. What they have in common is that they are trying very hard not to hurt anyone. The werewolf does the Oz thing and locks himself in places when he turns. The vampire is going cold turkey managing to not kill very often. And their apartment is haunted by a young woman ghost who, in their supernatural presence, can now be seen by others though not the one person she want to have see her. I liked the blend of humor and tragedy. Nicely done.

Since BBC is not offered on my cable system (don’t ask), I’ll be counting on you to watch and let me know what you think. 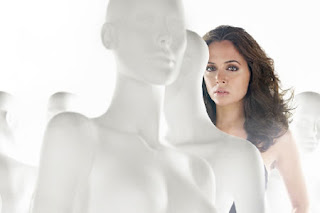 A lead from Gina—an article about next season’s Dollhouse.

It gets odder and odder—David Caradine apparently was playing one of those games when he died. 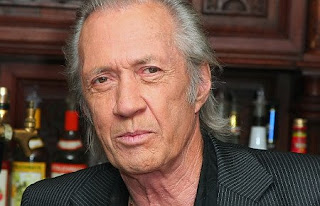 Different strokes, people. Has always been my motto—but publishing death photos is too much. Evidently a Thai newspaper did that. You can find it if you want, it’s easy enough. Ironic that last night on a program called Mental, he was the guest star.


Since Mario and I had a long discussion about Caradine at group last Tuesday, we did some research and if you are interested, found a couple of articles on auto-erotic asphyxia. Here and here (this one from Mario as if you couldn't tell from the subject.) Is it me, or is this a stupid way to die?

And if you are curious about what an interview with Mario and I would be like, here’s your chance to find out. ARE (All Romance Ebooks) interviewed us at RT. It’s the third of a three parter ( about 42 minutes in) but first is Lorelei James (AKA Lori Armstrong). Her stuff as Lorelei is HOT.

I am going to try this video thing one more time-- U.G.L.Y. A Buffy Video by Jasmin

Comments:
Well I just found the Pilot for "Being Human" online and gave it a go. It is actually pretty good and I've links for about 5 more episodes so I might atually give it a go. The pacing of the show is very ... British. However, the concept seems to be pretty solid and by the end of the first episode I felt like I had a pretty decent handle on the kinds of things the characters are dealing with. I'd recommend it for anyone who can manage to find it on BBC-A. Jist be aware that it IS a British Drama and there for is not the quick talking always, something going on, big hand movements, and vast range of vocal fluctuations that you expect to find in American shows. I personally already like it better than HEX. People said that HEX was supposed to appeal to the Buffy crowd (a phrase seems to be akin to "like JRR Tolkien" that gets thrown around a lot on the covers of Sword & Sorcery books. I however found HEX to be a complete bore and a drag after the first three episodes. Four or Five episodes in they were already using the "Rosemary's Baby" bit. Xena atleast saved Rosmary's Baby for the third season.

Hey Leia-- Where did you find it? When I tried I got "not available in your area"--

Loved this: Xena at least saved Rosmary's Baby for the third season.

Jeanne - my first stop for TV online if it's not on Hulu is surfthechannel.com. Think of them as a directory for television links from all over the web. They don’t host the episodes; they just tell you where they are and send you to the site where the video is hosted. What sets StC apart from other sites like it, is that they are very picky about who they link to. You don’t have to worry about getting a computer virus from a shady site, or being forced to download anything in order to watch videos. The specific link for the "Being Human" TV show is http://www.surfthechannel.com/show/73026.html

If you are planning on doing a marathon (in this case, more than one episode) I would recommend using the links for the Chinese site Tudou. The video quality isn't as good but you have no time limits. Megavideo provides much better picture and image quality, but you are limited to 45 min at a time - before having to wait 55 min to watch another 45 min.

About Rosemary's Baby - in my mind that is a plot point that should be used very sparingly. For me to have seen it in HEX so soon in the show just raised a massive red flag. Were they that desperate for ideas that they had to be so incredibly cliché so early on? Granted Angel had its own form of R'sB within its first season, but Angel's R'sB bit was a one off deal (MOW mode) in a show composed of characters that had already been established for a number of years. I didn't mind Xena doing R'sB because 1) they at least waited a while to play that card and 2) the show was so wonderfully kitsch that I would have been surprised if they hadn't used it eventually. HEX however took itself really seriously. Sure you had the lesbian, comic relief, ghost friend but that was its only nod to levity. A show that takes itself that seriously has no room for uber cliché plot points so early in its run (or at all). It's like committing script suicide.

Leia said: Angel's R'sB bit was a one off deal (MOW mode) in a show composed of characters that had already been established for a number of years.

Still, this was one of my least favorite ARCS-- don't even know why. Well, maybe I do. Jasmine (which is who I think you're referring to and not Darla's baby although in some respects that could be a R'sB, too) signified the beginning of the end for Cordy who I really liked. I know part of the reason was because Charisma Carpenter was pregnant and therefore limited in what she could do, but her character ARC had been so well developed up to that point, it was disappointing to see it dropped.

I agree about shows that take themselves too seriously. Big turn off.

Yes I was referring to the one with Cordy as well. I suppose the one with Darla's baby could have been considered RsB as well. It does have all the trademarks. Well ,minus all the attemps to punch through the womb that RsB do in tv shows. I too miss Cordy a lot. It is amazing how one character shifted and changed so much throughout the years. I was so glad when they moved her on to Angel like that. It was not something I as a writer would have thought to do, but it added a special dynamic. In a way I think Cordy is partially responsible for the success of Angel and its ability to take off as a spin-off. Angel was a solid front man, but Cordy added a "special something" that just took it up one more notch.

But I suppose all that is to say that initially, "Being Human" looks like it has a lot going for it. I'll watch a few mroe episodes this weekend and let you know what I think.

Edited: sorry to re-post this. I shouldn't be typing on four hours of sleep.

Leia: Thanks for the info on how to find Being Human.

I concur, Cordelia made the dynamic work. Loved watching her evolve, but still maintain her essential Cordy-ness.