Thursday, June 04, 2009
More female villains.. Great post on female villains—Mario and talked about it at critique group and we added Sharon Stone’s character from Basic Instinct. 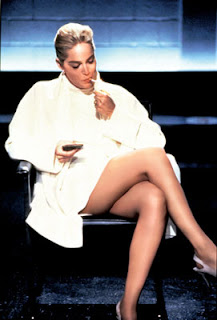 A couple off the top of my head, Famke Janssen as Phoenix in X-Men 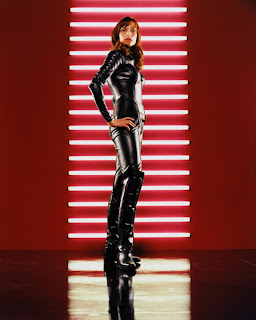 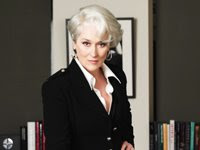 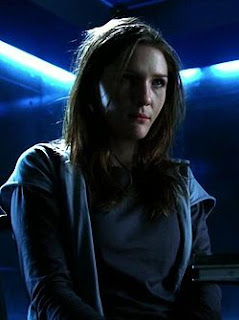 And Sarah Corvus of BSG. 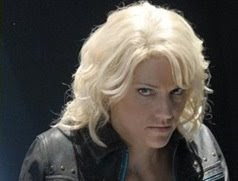 Well, I guess that was four actually.

I think Photographer Leia summed it up best when she said: As for myself I try to avoid things with female villains b/c they can out creep/ out evil the guys in a heartbeat.

Amen to that. It’s that maternal instinct—when it goes bad, it goes VERY bad.

Something from the truth being stranger than fiction files: 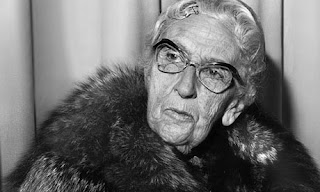 And come to think of it, this may also qualify:

A new incarnation of "Buffy the Vampire Slayer" could be coming to the big screen.

"Buffy" creator Joss Whedon isn’t involved and it’s not set up at a studio, but Roy Lee and Doug Davison of Vertigo Entertainment are working with original movie director Fran Rubel Kuzui and her husband, Kaz Kuzui, on what is being labeled a remake or relaunch, but not a sequel or prequel.

While Whedon is the person most associated with "Buffy," Kuzui and her Kuzui Enterprises have held onto the rights since the beginning, when she discovered the "Buffy" script from then-unknown Whedon. She developed the script while her husband put together the financing to make the 1992 movie, which was released by Fox.

Kuzui later teamed with Gail Berman, then president of Sandollar Television, bringing back Whedon to make the TV series, which was produced by Fox TV and launched on the WB in 1997. Kuzui and Sandollar received executive producer credits on "Buffy" and its spinoff, "Angel."

The new "Buffy" film, however, would have no connection to the TV series, nor would it use popular supporting characters like Angel, Willow, Xander or Spike. Vertigo and Kuzui are looking to restart the story line without trampling on the beloved existing universe created by Whedon, putting the parties in a similar situation faced by Paramount, J.J. Abrams and his crew when relaunching "Star Trek."

One of the underlying ideas of "Buffy" allows Vertigo and Kuzui to do just that: that each generation has its own vampire slayer to protect it. The goal would be to make a darker, event-sized movie that would, of course, have franchise potential.

The parties are meeting with writers and hearing takes, and later will look for a home for the project. The producers do not rule out Whedon’s involvement but have not yet reached out to him. Speaking from Tokyo, Fran Kuzui said the company is constantly approached not only about sequels but theater, video games and foreign remakes for "Buffy." When Vertigo’s Lee contacted them, they were intrigued.

"It was Roy’s interest in taking Buffy into a new place that grabbed us," she said, noting that original exec producer Sandy Gallin also was consulted. "It was based on our respect for what he does, and his particular sensitivity to Asian filmmakers, that we wanted to work with him."

Kuzui, who is prepping do direct a movie in Japan in the fall, added: "Everything has its moment. Every movie takes on a life at some point, and this seems like the moment to do this."

A Buffy movie without any of the Scooby gang? I just can’t see it.

And neither, evidently, does Anthony Head. Here’s his take in a nice interview done on the Who’s News Blog.

Doing a Buffy movie without Whedon? “I wouldn’t want to see it, no,” Head admits. “The Kuzuis didn’t do a great job on the movie the first time around. It was Joss’ script at the age of 19, but they changed a lot of it. They said, ‘Look, we know best and we know how to make this movie,’ and it became quite schlocky and high camp.” Head recalls the time when he went to audition for the Buffy series because he loved Whedon’s pilot script so much, and his agent advised him to watch the movie to get the tone of the show before his screen test. “So I did and I went, ‘Oh, that’s not it at all.’ I went in and saw Joss and said, ‘I watched the movie last night!’ And he went, ‘Oh. Did ya?’ I just put it out of my mind. The bottom line is if a movie was ever to be made, it should be made with Joss Whedon, whether it’s a retrospective or not. But it would be madness to do it without him. [The Kuzuis] have the rights to because they have the rights to the original movie, but it should be interesting to see. It may be a bit like watching a car wreck.”


Now that Terminator SCC has been cancelled, Summer Glau is out of work. But maybe not for long. From WhedonInfo:

IN JANUARY, Warner Bros and producer Dan Lin announced plans to relaunch the Tomb Raider series. Lin has now elaborated on the proposed reboot. He told About.com: "It’s a great origin story that we’re going to tell. A very character-oriented, I would say more realistic, [film] than the past Lara Croft movies. "It is an origin story so it is a younger Lara Croft. I would say it’s like Terminator - character-driven action. I think for me the Lara Croft games and movies have gone a little too action-oriented. I wanted to have action, but with character. You want to honor the existing mythology but at the same time bring in new fans." As it’s a reboot that automatically means no Angelina Jolie, who played Croft in the previous two movies.

Earlier speculation that Megan Fox would be the new star was dismissed and Lin says there has not yet been any casting for the new movie. But who would you like to see strap holsters to their thighs and play the next Tomb Raider action-woman?

Among names put forward is Summer Glau, who played cyborg Cameron in the just-cancelled Terminator: The Sarah Connor Chronicles. Glau, 27, is pictured here striking an amazingly similar pose to Jolie’s Lara Croft, in a montage courtesy of Underwire.

Another suggestion is 32-year-old British actress Rhona Mitra, who was the body model for the video game character and has appeared in the films Doomsday and Underworld: Rise of the Lycans.

Or how about 35-year-old Kate Beckinsale from the first two Underworld movies; Malin Ackerman, 31, from superhero movie Watchmen; or Smallville stars Erica Durance, 30, or Kristin Kreuk, 26? A further name that’s been suggested is TV’s House actress Olivia Wilde, 25, who was recently at the top of Maxim’s Hot 100 list.

What do you think?

One last thing—here is a website that has full-length episodes of most TV shows. I’m sure there are others out there, too, but if you want to try before you buy a season, this is a great idea.

See you next week. Mario and I are working on another contest so stay tuned! And let us know what's going on in your world...  ¶ posted by Jeanne Stein @ 6:15 AM

Comments:
Egads! My first thought re the Buffy movie thing is if they aren't using the TV show characters WHAT IS THE POINT???? Sorry, but as good as Buffy is, it ain't Star Trek.

My second thought is don't they have an original thought in their heads? Why does everything have to be a "reboot" of something already done? Where is there any originality to do something new without "reinventing" something else?

That rant goes for the Lara Croft movie too.

Why can't we have an Anita Strong or a Felix Gomez movie?

Excellent villianesses! I'd forgotten about BSG!

Congrats to Brenda Novak and the funds raised for research, such a good cause. My niece has juvenile diabetes, so it's a cause near and dear to my heart.

I can't believe they're going to do a Buffy movie without Whedon - how could this be? If they think it's going to be like Star Trek, one of the hottest movies released so far of the summer block busters, is it going to be a prequel? Whedon was the series, without him and his imagination, I not sure that it will be viable.

Hey Gina-- I keep expecting Warren to tell us he's had a movie offer. His character and world SO lend themselves to the big screen!!!

I know, Dottie-- it just wouldn't be the same. Even the new ST used the same characters, just younger. I have to agree with Anthony on this one!

I agree with Gina, there is so much great stuff out there. Why reboot?

Maybe you should write Joss a letter...(Girls that Growl, a YA book, opens with the mc writing Joss a letter about how her life should be his next TV show)

Can't believe nobody has mentioned Sherry Palmer from 24. She was juicy! Smart, fully realized, and she didn't rely on her sexuality. Oh, and how roles are there like that for black women? Nina from 24 was a good villain, too, but not on the level of Sherry Palmer.

Thinking on Buffy villainesses when Faith was baaaad that was the best that Eliza Dushku ever was.

Oh Jeanne -- I don't think I'd be able to stand the excitement if there was a Kop movie. I'd probably have a heart attack and die.

Kind of like the day I heard LOTR was being made into a movie.

Suzanne said: Summer Galu as Anna Strong?Maybe you should write Joss a letter...(Girls that Growl, a YA book, opens with the mc writing Joss a letter about how her life should be his next TV show)

I LIKE IT!! Both of these suggestions. I've always kind of pictured Kate Beckinsale but really, Summer Glau is better. She's got a harder edge and is not so "pretty."

I've got to check out Girls that Growl. What a great title!

Is the tot enjoying her summer?

Here's where I have to admit, I've never watched 24. I know, I know, my daughter gives me shit for it, too.

And I can't believe we forgot Faith either! As the saying goes, when she was bad.... I love the line when Buffy is trying to get some indication of remorse after she killed the mayor's lackey and Faith says, "You don't get it. I don't care."

Welcome to the asylum, btw-- I don't know if you've posted before.

I happened across this article today. I'll send everybody kleenex -- sounds dangerous for all you Dollhouse lovers.

Gina, thanks (?) for the link. I think I'll post this again on Thursday for anyone who might have missed it.

Wouldn't think of it!

RE: Female villains, I have to bring up one of my all-time faves, "Double Indemnity"'s Phyllis Dietrichson, portrayed in stunning platinum-blonde glory by Barbara Stanwyck. Really doesn't get much better than that. But, if I think about it, here are a few more: Mary Astor in "The Maltese Falcon," Kathleen Turner in "Body Heat," Linda Fiorentino in "The Last Seduction," Nicole Kidman in "To Die For." Maybe a little more Femme Fatale than Evil Villainess, but hey, evil is evil, right? Anyway, my two cents worth.

Kris-- Nice to see you here. And good list!

BTW, I'll be at Comic Con this year!!!! Hope we can spend time together.