“According to the New York Times, swine flu can be transmitted on money. You know what that means…We’re all safe. No one’s got any.”

Okey-dokey, all, as Mario hinted in his post on Monday, we are launching another contest not for cash, unfortunately, but for RT shwag. Round one starts today and the prize is: 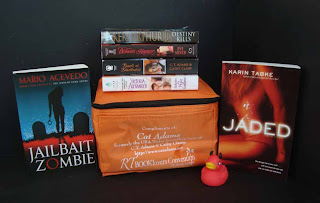 There will be a couple of other goodies, too, but Mario didn’t get his act together so I could take a picture of all of it. Big surprise, huh?

Anyway, here’s the deal. Really easy this time. Just name your favorite villain—can be movies, TV, books, a relative—submit the name as a comment and maybe a sentence or two why. But this is strictly a raffle kind of deal so you can enter as often as you like. Closes to entries Wednesday, May 13th, midnight.

Next week—I’ll post another prize package for your favorite hero(ine). Same deal as above. I’ll remind you. Winners for both contests will be chosen by random drawing and announced on May 21—

Onward and upward—Amazon unveiled its new Kindle. There’s a video here and as you can see from the pic, it’s got a larger screen (and larger price tag.) Anyone who has an older Kindle care to comment? I always thought there should be a trade-in deal for those who took a chance on the first edition only to find out a newer, shinier model was right down the road. It’d piss me off, but I’m that kind of gal.

A really cool look at Penguin SciFi covers from the 1930’s – 1970’s. I really thought Mario would scoop me on this since he’s all arty and shit. Here are two of my favorites: The Midwich Cuckoos by John Wyndham and A Clockwork Orange by Anthony Burgess. 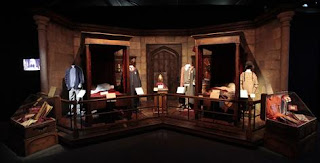 Art exhibits I hope hit the road: Hogwarts School of Witchcraft and Wizardry – on exhibit now in Chicago.

New Star Trek starts this week!!!! Official site here. Has so many bells and whistles, it takes awhile to load even on my superspeedy new MAC—

A Whedon tie-in From WhedonInfo.com:

Why we want him on board :

Joss is God, or so his legion of faithful fans likes to proclaim. Like Abrams, his television work is amazing, and we bet he could make a fantastic Trek. While his dialogue is snappy and his storylines are exciting, what makes us most yearn for his involvement is his respect for the genre. He’s already shown his space opera chops with the short lived and much beloved Firefly series and Serenity feature film.

How his style would change Trek :

We wouldn’t be surprised if Whedon went the same route as Abrams, focusing on a younger crew. Expect a totally different vernacular with the crew getting in some "holodeckage" and feeling "hyperdrivey."

What we could expect :

Joss has a thing for strong women paired with paternal protectors. In his Trek, we’d bet that James T. Kirk would be reborn as Jamie Kirk (played by Eliza Dushku ?), the toughest chick ever to squeak through Starfleet. (Hey, a gender-swapped Starbuck worked for Ron Moore’s reimagined Battlestar Galactica !) Spock would probably be an older Vulcan dude, maybe with an English accent. Fanfickers, start your engines…

"Dollhouse" Tv Series - Exposed : How To Hack In & Who Runs It

And finally: To Vickie and Suzanne and all the other mom’s out there—Happy Mother’s Day!!  ¶ posted by Jeanne Stein @ 6:02 AM

Comments:
Jeanne! Thankin' you! What a sweetie pie you are! I love being a mom and I never in a million years wanted to have kids...then along came my hillbilly soulmate and now there is Lady K, our little weirdjin 6 year old.

My favorite villain.....first would be Spike of Buffy fame. When he was first on, he was such a bad boy...made my heart go pitty-pat.
I know I have more...I'll have to do some thinkin'.

Oh no -- NO Jamie Kirk -- nonono. Still haven't forgiven what happened to BSG. Rethinking ST that way would be a million times worse.

Joss is awesome enough that he should be able to come up with something new rather than bastardizing something that is de rgeur classic.

Wow .. I'm out of it for a few weeks (car crash ... eeek! don't worry I'm fine. Just a few pulled muscles I'm still dealing with a few weeks later) and I come back on a contest day! Can't get much better than that.

Well my favorite villian and my thoughts on the most *effective* villain are probably two different people but the first one that comes to mind would have to be Nathan Fillian as Caleb in Buffy Season 7. Just thinking of Caleb gives me the Heepie Jeebies. Whedon/Fillian some how managed to take a holy figure (a reverend) and turn him into the mouth piece of The First (who is essentially the devil.) Granted that is done in some form or fashion in other places before; but the catch here is that it was all done in a manner that was Scriptually sound and didn't target faithful Christian as being evil. Instead Caleb was revealed to be essentially an Anti-Christ that lured people in with sweet words only to destroy them once they believed in him, but wasn't made to in any way represent others of the faith. Just thinking of Caleb I get chills down my spine. I don't think any villian has ever effected me like that before.

P.S. Jeanne the video links aren't working for me :(

P.S.S "Expect a totally different vernacular with the crew getting in some 'holodeckage' and feeling 'hyperdrivey.'" That made my day.

P.S.S.S (?) I think the purpose of the new kindle if for people (like me) who are pretty much blind as a bat. It appears to be being marketed as the "Large Print" version of the Kindle. Atleast that is what I got from looking at Amazon's front page earlier today.

One of my favorite villians is Randall Flagg from Stephen King's books and all his incarnations.

Leia: Ooooooooo....Caleb was just truly evil..with a honkin' big IL at the end.

Jeanne: Gotta say, the kids on the cover of MIDWICH CUCKOOS have the Children of the Corn aura about them....

I suppose someone should also mention Darth Vader. He's pretty awesome. Evil ... but so human underneath when it REALLY mattered. Well that and I don't think there is a villan that is quoted anymore than he.

Randell Flag still makes me look over my shoulder once in awhile.

Leia, sorry to hear about your accident. Glad you are on the road to recovery. Yikes!

Gina-- I pretty much had the same reaction about "Jamie" Kirk, but it did make me smile.

And Vickie-- I think you must be a great mom. I haven't met you, but I have met Suzanne and the Tot and I have a feeling you two have many of the same qualities when it comes to motherhood. I admire you both.

Hannibel Lector.....whoever played him, he was never better than in the books so I could use my imagination to scare the bejeezus out of myself.

Dr. Horrible would probably be my favorite villain lately. You know he has a heart, but joining the Evil League of Evil is just that much more imporatant to him!

David in The Lost Boys

Thanks for the chance to win!

Saw the ST movie not once, but TWICE this weekend (not on purpose, went by myself and then my parents surprised me by picking that as the movie they wanted to see when we got together).

I can say, they did a fabulous job -- the best proof of that is when my sweet mother said "I really didn't want that movie to end, I was enjoying it so much!"

One or two small quibbles, but they did a fine job honoring the characters. I agree with mom -- was sad to see it end, would love to see the cast reunited for a series.

Have thought long and hard about my favorite villain. I'm going to go with Ambassador Londo Moliare from my favorite TV series ever, Babylon 5.

Why Londo? Because we first meet him as this loveable, happy-go-lucky goof who has been exiled to B5 to get him out of the way -- the PTB on him homeworld view him as a joke. Something goes very, very wrong however, and he succumbs to the temptation of power. Over the course of the series we watch Londo's descent into villaindom, sacrificing honor, integrity, friendship -- all in the name of revenge, always managing to do something entirely unexpected.

Case in point -- aiding in the capture and torture of J'Kar, and then, in a twist of conscience, stopping J'Kar's execution and helping him escape, all while continuing to pursue the utter destruction of J'Kar's homeworld. You'd have to watch the story to really get the delicious treachery involved.

In the end, Londo gets his due, and we cry for him, because he pays dearly, repents his crimes, and takes on an unspeakable punishment.

I've continued to think over this thing about villians throughout the weekend and after watching a number of Buffy Season 3 episodes I felt I had to raise my hand again and nominate The Mayor. He is so evil but yet he's germphobic, expects his underlings to use common courtesy (to him atleast)and to some extent believes core family values to be important. Granted all of that is overshadowed by the big fact that he's EVIL, but how many villians can you name that follow statements of mass destruction with invitations for hot cocoa or minature golf games. hm?

As a favorite villian, I'm going with Piscary from Kim Harrison's The Hollow Series.

He tried to come off as a great big teddy bear when in actuality he was a mean ole grizzly with giant sized teeth. I was glad when he was well and truly dead.

I also had a profound dislike for James in Twilight.

I'm noticing a theme here, my bad guys seems to be really bad vamps, unlike Feliz Gomez who can kick butt with the best of them and still be a good guy.

Ohh, Hannibal Lector is a good one. While I loved the movies and books he truely was evil.

Heath Ledger's version of the Joker was a good villian too.

Then of course there is always the devil, satan himself. I would think hes in enough books and movies to qualify. And my nature hes never a good guy.

That completely made my night. I haven't laughed like that in a while. Thanks. So true ... so true.

MyBlog 2.0 said : I also had a profound dislike for James in Twilight.

I had a profound dislike for Edward in Twilight. IMHO if you take away his vampness you are left with a controlling, posessive, possibly emotionally manipulative, stalker of a boyfriend. Can I nominate him as a badguy, even if he is the book's protagonist? I'd be able to dismiss most of his bad traits due to the fact that he's been around for a while and is bound to believe that he does know what is best. It is the stalking and hiding outside her window to watch her sleep that pushes it over the edge. I've had a stalker and it is no laughing matter.

well villianess, nurse rachet ,from one flew over the coo coo nest, god i hated her LOL and feared her